Bunchy top is a viral disease caused by the Banana bunchy top virus (BBTV). The disease, often called BBTD for banana bunchy top disease, gets its name from the bunchy appearance of infected plants. By that time, however, the  virus has most likely been spread to other plants by the banana aphid, Pentalonia nigronervosa. Infected plants cannot recover and will serve as a source of viral particles unless they are destroyed. The virus is also spread through infected planting material.

There are no known sources of resistance to the virus. All cultivars are believed to be susceptible. To the extent their reaction varies, it's in the time taken for the symptoms to develop. Bunchy top is considered to be the most devastating viral disease affecting bananas. The IUCN's Species Survival Commission has listed it among the world's 100 worst invasive alien species[2].

The disease most likely originates from the centre of origin of the genus Musa, which extends from India to the western Pacific. Although the disease was first reported in Fiji in 1879[3], the virus itself was only isolated in the late 1980s[4][5].

Bunchy top is widespread in Southeast Asia and the South Pacific, and is present in parts of India and Africa. It was observed for the first time in Fiji in 1879, Egypt circa 1900, and Sri Lanka and Australia in 1913[6]. There are also reports from 1925 of a similar disease affecting a abaca (Musa textilis, also known as Manila hemp) in the Philippines[7].

In addition to Sri Lanka, it has been reported in parts of China, Indonesia, Malaysia, Vietnam[22], Philippines, Taiwan, Japan[23], India, Iran[24], Nepal and Pakistan[25], Bangladesh, Myanmar, and Thailand.

Besides Australia and Fiji, it has been reported in Hawaii, Guam, Samoa, American Samoa, Tonga, Tuvalu, Kiribati and New Caledonia[26]. The American continent (Central and South America and the Caribbean) is reportedly free of bunchy top.

Bunchy top is named after one of the most characteristic symptoms of an advanced infection, when the leaves become progressively dwarfed, upright and bunched at the top of the plant, with wavy and chlorotic margins that tend to turn necrotic. Cabbage top[27] and curly top[28] (for abaca) have also been used to term the disease.

Initial symptoms may be difficult to detect for a novice due to their inconspicuous nature. The first symptoms are dark green streaks on the lower portion of the leaf's midrib and later on the secondary veins. Removing the waxy white coating on the midrib makes it easier to see the streaking. The streaks consist of dot-dash patterns, the so-called 'Morse code', the most diagnostic symptom of bunchy top. As infection progresses, streak symptoms become more evident on the leaf blade. Dark-green hook-like extensions of the veins can also be seen in the narrow, light-green zone between the midrib and the lamina. The short hooks point down along the midrib toward the petiole. These hooks are best observed from the underside of the leaf by holding the leaf to the light.

The symptoms are most severe and distinctive when the infection arises from the virus moving from the parent plant to the suckers. These plants are typically stunted (under 1 m) and rarely produce fruit. 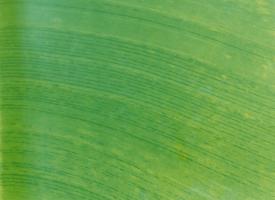 The Morse code symptom consists of dark green dots and dashes along the veins of the leaf. They also appear on the midrib and petiole.

The J-hook symptom consists in dark green streaks that terminate at the midrib. J-hooks are often associated with the 'Morse code' symptom.

Short, narrow and upright leaves give infected plants the bunchy top appearance after which the disease is named.

When aphids carrying the virus (also called viruliferous aphids) feed on a healthy plant, the symptoms are usually milder and only appear in tissues formed after the infection. The first symptoms usually appear at the earliest in the second leaf to emerge after a plant has become infected. The leaf will look normal to untrained eyes but on closer inspection it will have the dots and dashes on the midrib, petiole and blade. Each new infected leaf is narrower and shorter and also stands more upright than the previous one. The margin also curls up. If the plant flowers, the veins of the bracts of the inflorescence may show discontinuous streaks that resemble the 'Morse code' symptoms on petioles and leaves (mottled inflorescence). If a bunch is produced, its growth will be stunted and the hands and fingers are likely to be distorted and twisted. On plants infected very late in their life cycle, the only symptoms present may be a few dark green streaks on the tips of the flower bract.

The terms primary and secondary infections are used to differentiate the infections caused by aphids from those passed on by the mother plant to her suckers. Depending on authors, their ascription varies.

Although bunchy top symptoms are usually very distinctive across all banana cultivars, symptomless and mild infections have been reported in Taiwan[29] and attenuation of initially severe symptoms have been reported in a cultivar known as Veimama (also called Vi-mia-mia or Middle finger) in Fiji[3]. Leaf margin bleaching, yellowing or necrosis can also be caracterisitic of nutrient deficiencies or environmental stresses.

Symptoms of bunchy top in leaves that emerged after the plant was infected with the virus by an aphid.

Mottled inflorescence of a plant infected at a late growth stage. The mottling pattern is formed by the discontinuous streaks in the veins of the bracts.

When a plant infected with the virus at a late stage of growth produces a bunch, the latter is typically small and will not grow normally.

There is no cure for bunchy top. Regular inspections to detect and remove infected mats (the rhizome and its attached suckers), and replanting with virus-indexed tissue-culture plantlets, which have been screened in a lab and certified 'virus-free', are the basis for good management[30].

In the 1980s, infected plants in Australian commercial banana farms were doused with kerosene (paraffin) and chopped up, until it was realized that the practice contributed to the dispersal of aphids as they flee for cover (in addition to being environmentally unfriendly). It has since been replaced by a dual strategy[30]. Firstly an herbicide is injected directly into the plant to destroy it followed by a systemic insecticide in order to kill the aphids. Contact insecticides are inefficient as aphids often hide under leaf sheaths or other plant parts. An additional measure to control aphids (such as spraying oil) may be necessary in winter when plants injected with herbicide take longer to die[31]. As part of a national effort started in 2009 to eradicate the disease from commercial plantations, hobby farms and backyard gardens, Australian scientists developed a mapping approach to detect banana plants in backyard gardens to facilitate the work of inspectors charged with destroying infected plants[32].

In the case of smallholder banana farmers who do not have access to spraying oils, herbicides and insecticides, infection levels can be reduced by regular inspections and prompt removal of infected mats, detrashing (removal of dead leaves hanging down the plant), use of BBTV-free planting material and varietal mixtures, and opening new fields as far away as possible from existing plantations[33].

Farmers should also watch out for alternative hosts of the virus (such as Canna, Heliconia, Strelitzia), as well as for alternative hosts of the aphids. Another thing to remember about bunchy top is the management of the ants, which tend the banana aphids. Ant colonies may be found in nests beneath the dead leaves that cling to the pseudostem. Removal of these leaves will reduce nesting areas for the ants and subsequently aphid populations.