Fusarium wilt at a glance Fusarium wilt of banana, popularly known as Panama disease, is a lethal fungal disease caused by the soil-borne fungus Fusarium oxysporum f. sp. cubense  (Foc). It is the first disease of bananas to have spread globally in the first half of the 20th century. The epidemic strated in Central America on the susceptible 'Gros Michel' banana, which at the time dominated the global export trade. In the 1950s, 'Gros Michel' was replaced by Cavendish cultivars. At the end of the 1980s, the so-called TR4 strain, to which Cavendish cultivars are susceptible, was isolated from samples from Taiwan1 . It has since spread through Asia and reached Africa in 2013 (see Distribution of TR4).

The fungus enters the plant through the roots and colonizes the xylem vessels thereby blocking the flow of water and nutrients. Disease progression results in the collapse of leaves at the petiole, the splitting of the pseudostem base and eventually plant death. The fungus cannot be managed using chemical pesticides. The solution best adapted to the continued production of bananas in infested soils is replacing susceptible cultivars by resistant ones.

The pathogenic isolates are classified into races based on the cultivars on which they cause disease. For example, the isolates that affect cultivars in the Gros Michel, Silk and Pome subgroups, among others, are classified as race 1. When Cavendish cultivars exhibiting symptoms of Fusarium wilt were first observed, the isolates were classified as race 4. They were later subdivided into subtropical race 4 (STR4) and tropical race 4 (TR4) to distinguish the strains that need predisposing factors to cause the disease from the ones that don't (see Race 4). The race concept has been criticized for being an imperfect measure of pathogenic diversity, but it is still considered useful to describe host reaction and new disease outbreaks2 . 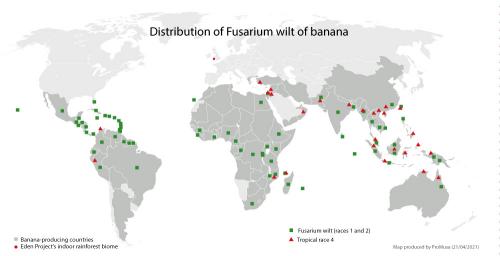 Although the disease probably originated in southeast Asia, the first recording of the disease was made in 1874 in Australia, where it was observed at Eagle Farm near Brisbane3 . It was then reported from Panama in 1890. Within a decade the disease had spread to Costa Rica and subsequent outbreaks occurred in Surinam (1906), Cuba (1908), Trinidad (1909), Jamaica (1911), Honduras (1916) and Guatemala (1919). The disease has since been reported from most banana-producing countries.

For details on the distriburion of TR4, go to the Musapedia page on TR4.

Fusarium wilt is a typical vascular wilt disease. The fungus invades the vascular tissue through the roots causing discolouration and wilting, eventually killing the plant. The progress of the internal symptoms can influence the first appearance of the external symptoms. The fruit do not exhibit any symptom.

The characteristic internal symptom of Fusarium wilt is vascular discolouration, which varies from pale yellow in the early stages to dark red or almost black in later stages. Internal symptoms first develop in the feeder roots, which are the initial infection sites. The fungus spreads to the rhizome and then the pseudostem.

Externally, the first signs of disease are usually wilting and yellowing of the older leaves around the margins. The yellow leaves may remain erect or collapse at the petiole. Sometimes, the leaves remain green, except for spots on the petiole, but still snap. The collapsed leaves hang down the pseudostem like a skirt. Eventually, all the leaves fall down and dry up.

Splitting of the base of the pseudostem is another common symptom. Other symptoms include irregular, pale margins on new leaves and the wrinkling and distortion of the leaf blade.

Infected suckers do not start showing symptoms of Fusarium wilt until they are about 4 months old, a situation that has contributed to the spread of the disease through planting material. The fruit does not show any specific disease symptoms.

Reddish to dark brown discoloration of the vascular system.

Yellowing typically begins at the margin of the older leaves.

Farmers may spread the Fusarium fungus by transplanting symptomless but infected suckers.

The leaf symptoms of Fusarium wilt can be confused with those of the bacterial disease Xanthomonas wilt. In plants affected by Fusarium, yellowing and wilting of the leaves typically progresses from the older to the younger leaves. The wilted leaves may also snap at the petiole and hang down the pseudostem. In plants affected by Xanthomonas, the wilting can begin with any leaf and the infected leaves tend to snap along the leaf blade.

In countries with Moko disease, which is caused by Ralstonia solanacearum race 2, and also causes vascular discoloration, it is possible to confuse the two diseases. Unlike Moko, Fusarium wil does not cause wilting and blackening of young suckers or a dry rot in the fruit. The first symptoms of Moko on rapidly growing plants are the chlorosis, yellowing and collapse of the three youngest leaves, not the older leaves as with Fusarium wilt. Finally, with Moko the vascular discoloration is concentrated near the centre of the pseudostem and not peripherally, which is common with Fusarium wilt.

The fungus is commonly spread through infected planting material, infested soil and water.

Symptomless but infected suckers or rhizomes can transmit the disease when planted in a new area. Infected planting material is often responsible for the local, national and international spread of the disease. Certified tissue-culture plantlets should be free of the fungus and would not contribute to the spread of the disease.

Staff and visitors to a banana plantation have the potential of moving the fungus in or out through infested soil attached to vehicles, tools and shoes. Untreated soil used as a potting medium can transmit the fungus and animals can also move around fungal spores present in soil.

Spores can be carried in surface run-off water. They can also contaminate irrigation reservoirs. It is said that in China pumping water from sources contminated with TR4 spores contributed to the spread of the Fusarium wilt in plantations of Cavendish bananas4 .

The fungus cannot be controlled using fungicides and cannot be eradicated from soil using fumigants. Drainage, environmental conditions and soil type influence host-pathogen interactions. Soils that suppress the disease have been reported in Central America, the Canary Islands, Australia and South Africa. However, the chemical, biological and physical factors responsible for this phenomenon are not well understood.

The FHIA improvement programme has produced hybrids that are resistant to races 1 and 4, while the Taiwan Banana Research Institute (TBRI) has released Giant Cavendish tissue-culture variants (GCTCV) that display varying levels of resistance to TR45 .

In field trials conducted in China, FHIA-01, FHIA-02, FHIA-18, FHIA-25, Pisang Jari Buaya, Rose (AA), and to a lesser extent GCTCV-119 and FHIA-03, have shown resistance to TR46 . Preliminary results from a field trial conducted in the Philippines in 2011-2012 suggest that EAHB and Plantain might be resistant to TR4. Most of the ITC accessions screened displayed little or no sign of Fusarium wilt7 . The one exception was Ibwi (ITC14658 ), whose ploidy (2x/3x)9 suggests that the accession might not be representative of the Ibwi cultivar. It is possible that the wrong accession was introduced to the ITC. In a separate field trial conducted in the Philippines, only 1% of the GCTCV-219 plants exhibited symptoms of Fusarium wilt in the second crop cycle, whereas none of plants of the Cardava cultivar (Saba subgroup) did10 .

Two genetic engineering strategies, one involving the introduction of a resistance gene isolated from a wild relative of the banana and the other of an anti-apoptosis gene  derived from a nematode 11 , are being tested in Australia. Two of the evaluated lines were still free of the disease after three years of a field trial conducted in the Northern Territory12 .

Fusarium wilt is responsible for the demise of the export trade based on Gros Michel. By the turn of the 20th century Gros Michel was exported from the Caribbean and Central America, where large-scale plantations were carved out of virgin rainforest. The first losses followed soon after Fusarium wilt was reported in Panama and Costa Rica in the 1890s (the strains that cause disease on Gros Michel would later become known as race 1). Only the availability of vast areas of virgin land prevented an early collapse of the industry. The opening of new land to make up for the abandoned plantations (estimated at more than 40,000 ha13 ) allowed production to keep ahead of the disease. But as uninfected and accessible land became increasingly rare in the the mid-1950s, production costs in Central America soared.

Even though resistant cultivars had been identified as early as 1910, the export industry did not begin to replace the susceptible Gros Michel banana until the late 1950s13 . The change was motivated by the entry of Ecuador as a major banana exporter in the 1950s14 . To compete with the cheap Gros Michel from Ecuador, the infested soils of Central America were planted with resistant Cavendish cultivars. Gros Michel has not completely disappeared, however. It is still grown by smallholder farmers, in backyard gardens and mixed crop systems.

Race 1 also had an impact on the cultivation of Silk, Pome and Pisang Awak cultivars, while race 2 reduced the cultivation of Bluggoe, especially in Latin America. African banana farmers have been less affected by Fusarium wilt given how African Plantains and East African highland bananas are largely resistant to race 1 strains.

Meanwhile, the emergence of TR4 started affecting commercial plantations of Cavendish cultivars. In the 1960s, Taiwan had about 50,000 hectares of banana plantations and was the major banana exporter to Japan. By the early 2000s, it had about 6,000 ha left in cultivation15 . In Indonesia and Malaysia, the arrival of TR4 in the early 1990s destroyed recently established export plantations within a few years15 . The fungus did the same to the banana industry in Australia's Northern Territory16 .

In mainland China, a survey conducted in 2006 reported that about 6,700 ha had been severely affected by TR4 in Guangdong province17 . A report from a 2012 visit to the southwestern of Guangdong, the island of Hainan and the region around Guangxi’s capital, Nanning, hints at extensive damage18 .

In the Philiipines, the Federation of Cooperatives in Mindanao (FEDCO) called on banana farmers affected by TR4 to grow oil palm in 201419 , even as new banana plantations were being established20 . Smallholder farmers growing Cavendish bananas for the export market are also impacted21 .

In 1950, United Fruit (nowadays Chiquita) hired  Robert H. Stover to devise management strategies for Fusarium wilt, which by then was threatening the very existence of the export trade based on Gros Michel. Stover added new insights into the taxonomy, variation, and physiology of the fungus, helped describe its interaction with banana, characterized resistance and susceptibility in banana, studied the influence of edaphic factors on the pathogen, and introduced flood fallowing as a means for cleansing contaminated soil (a practice that was later shown to contribute to the spread of the fungus). Stover’s research culminated in 1962 with the publication of "Fusarial Wilt (Panama Disease) of Bananas and other Musa species".

The publication of Stover’s monograph coincided with the substitution of the susceptible Gros Michel with resistant Cavendish cultivars. With this transition came a dramatic reduction in research on the disease as the banana export industry turned its attention to more pressing problems, such as black leaf streak22 .

The spread of TR4 has spurred interest in research on Fusarium wilt. See efforts to address the threat of TR4.