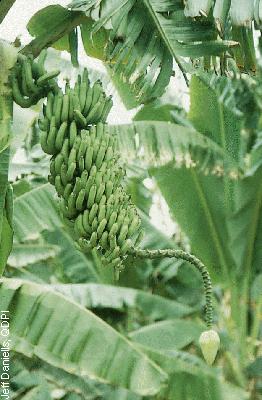 One of the differences with the other subspecies of Musa acuminata is the large number of seeds it can produce, up to 400.1

Molecular analyses of genebank accessions have found alleles specific to banksii in nearly all edible diploids8 . Several banksii alleles have also been found in important triploid subgroups such as Plantain and Cavendish2 . This suggests that some of the first forms of edible bananas may have arisen in New Guinea from wild populations, and early primitive cultivars were transported by humans to other regions where they then crossed with other subspecies of Musa acuminata. In addition to the huge diversity of edible diploids in New Guinea, parthenocarpic semi-wild forms have been documented in modern times which could represent transitional forms akin to those selected by early farmers thousands of years ago.

The Musa acuminata component of the Iholena and Maoli-Popoulu subgroups is also predominantly of banksii origin2 . Cultivars in these subgroups, along with Plantains and the edible diploids from Papua New Guinea, tend to have relatively high levels pro-vitamin A carotenoids9 . It has been noted that these bananas have in common to be derived from Musa acuminata ssp. banksii10 .

The genome of a genebank accession of Musa acuminata ssp. banksii has been sequenced11 . 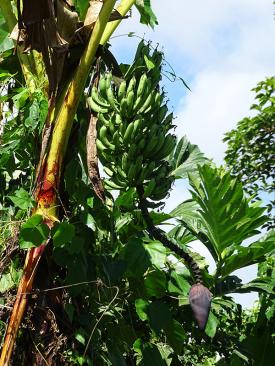 The description is from The wild bananas of Papua New Guinea by George Argent6 :

"Pseudostem up to 6 m tall, 80 cms girth at the base, usually a distinctive chocolate brown in colour but sometimes almost green. Sap watery or a dirty cream colour.  Rhizomes short but the suckers arising sufficiently far from the parent to grow more or less vertically upwards. Suckering usually prolific; the plants sometimes forming broad clumps. Shoulder brown or green, always with a broad (> 1 cm) appressed scarious margin. Petiole commonly mostly brown in colour sometimes pale green with or without a glaucous waxy bloom, the margin erect and distinctly scarious, canal large; TS ratio 1.2. Lamina green non-waxy above, paler green and variable in waxiness below, the base left-handed cuneate; PB ratio 4 - 5. 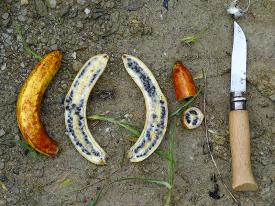 Male flower (G. Sachter-Smith)
Male peduncle very characteristically at first growing almost horizontally although becoming diagonal under the increasing weight of the developing fruit, later becoming positively geotropic and descending vertically. Male bud convolute, slender and pointed, 2 - 2.5 times as long as broad, variable in colour from pale green or yellow to deep dull red or purple often somewhat waxy. Male bract dull outside, coloured as the bud, shiny inside and pale green to pink or red, the colour always fading towards the bract insertion. Bracts lifting to a low angle and then rolling backwards and quickly falling. Male flower cream, the compound tepal c. twice as long as the free tepal. Compound tepal with bright sulphur yellow tips. Free tepal translucent white, ovate-acuminate with a distinctly wrinkled area at the base of the acumen. Chromosome number 2n = 22."

Musa banksii was first described in 1863 by Ferdinand von Mueller from plants collected in Queensland, Australia14 .

E. E. Cheesman reviewed the species in 194815 . Though he did not choose to reclassify it at that time, he did note its affinity with Musa acuminata and speculated on its relationship: "Both type and variety cross readily with forms of Musa acuminata Colla and give fertile hybrids. On this ground, as well as on consideration of the many close resemblances between the species in habit and floral characters, I am very doubtful whether Musa banksii ought to be maintained as a species at all. For the present it may be maintained for convenience, but intermediate forms may be discovered in New Guinea or the Moluccas connecting it so closely with the polymorphic Musa acuminata assemblage that it has to be reduced to varietal status. On present evidence we regard it rather as 'replacing' typical Musa acuminata at the south-eastern extremity of the range of that species, but its genotypic differentiation is evidently slight."15

It wasn’t until 1957 that Norman Simmonds reclassified it as a subspecies of Musa acuminata based on extensive field observations in New Guinea, Australia and Samoa,1 as well as crossing experiments in Trinidad. Simmonds noted that the number of ovules per ovary was on average higher than any other forms of Musa acuminata recorded at that time, correlating with large fruits and a higher number of seeds per fruit, making it an ideal candidate for breeding purposes if disease resistant specimens could be identified. The Musa of West Papua have only been scantily studied, and Simmonds hypothesized that another unique form may be present to the west of Papua New Guinea, and its introgression into eastern populations may be responsible for the greater variability observed in Papua New Guinea.

George Argent chose to treat it as a species, and was not convinced that Simmonds’ evidence was sufficient to warrant subspecific status6 . Nevertheless, he was intrigued by Simmonds’ theory of unique populations to the west, even going so far as to use that as justification to withhold the status of subspecies until further field studies could be conducted. Even farther to the west in the so called “triangle” of East Kalimantan, Maluku, and Lesser Sunda Islands of Indonesia, collecting missions in 2012 and 2013 revealed forms of Musa acuminata speculated to be close to ssp. banksii, but with unique characteristics, potentially giving weight to Simmonds’ 1957 theory16 17 .

Citing a 1991 paper18   and the results of their molecular study showing that Musa banksii clustered with subspecies of Musa acuminata, Argent and his co-authors agreed that Musa banksii  is not a distinct species and that the rank of subspecies was more appropriate19 . The authors also added that the genetic  diversity estimates also indicated that it was the least similar among the four subspecies  studied,  probably a reflection of its unique  characters and its most south-easterly distribution of all Musa acuminata subspecies.

Henry Vare and Markku Hakkinen, however, suggested preserving Musa banksii at the species status20 . This recommendation comes after citing that Simmonds & Weatherup21 and Kenneth Shepherd22 considered it a species, though that is not precisely the case. Both sources suggested it may be more distantly related to other forms of Musa acuminata, but do not go so far as to say it should be treated a distinct species.

Analyses done on the genome sequence of a genebank accession support the classification of banksii as a subspecies of Musa acuminata11 .