Musa taxonomy at a glance
Order

The genus Musa is divided into two sections: Musa and Callimusa[1]. A section is a taxonomic rank below the genus, and subgenus if present, and above the species. It is also above the series, but in the case of bananas the term series has been used interchangeably with section. In 2013, the number of sections in the genus Musa was reduced from 5 to 2[1].

In 1887, the French botanist Paul Sagot published an article in which he subdivided the genus into three unnamed sections: i) the edible bananas, ii) the ornemental bananas with upright inflorescences and brightly coloured bracts, and iii) the giant enset species, which were later given their own genus[3].

In 1947, Ernest Cheesman divided the genus into four sections based on chromosome numbers and morphological characteristics[5]. He wrote that he deliberately called the groups sections rather than subgenera "in an attempt to avoid the implication that they are of equal rank". His grouping of species proved to be useful and was widely accepted.

Cheesman divided the species with 11 pairs of chromosomes into two sections, Eumusa and Rhodochlamys. Among other characteristics, he described the species in this group as having convolute or more or less imbricated bracts that are rarely or never polished.

Cheesman split the species with 10 pairs into two sections, Australimusa and Callimusa. Among other characteristics, Cheesman described the species in this group as having strongly imbricated bracts that are polished on the outside.

Cheesman described the species in the Rhodochlamys section as being less than 3 meters high, having upright inflorescences, few flowers to a bract and brightly coloured bracts.

Although Cheesman said that Callimusa and Australimusa could also be split into dull-coloured and bright-coloured bracts, he believed that the most important distinction was the shape of the seeds, with Callimusa having a distinctive seed shape.

The shape of the seeds of Australimusa species is similar to those of species with 11 chromosome pairs. The section includes the wild species that gave rise to the Fe'i bananas.

In 1976, George Argent added the section, Ingentimusa for the lone species Musa ingens, which has 7 pairs of chromosomes[6]. 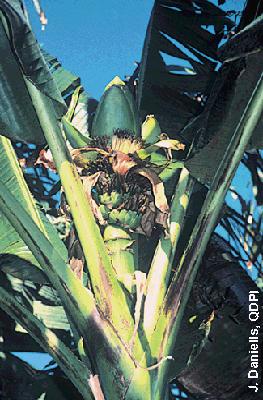 A number of molecular analyses have since forced a rethinking of the sections[7][8][9][10][11][12]. In 2013, the Finnish botanist Markku Hakkinen published a revision of the sections in which the Rhodochlamys section was merged into the Eumusa section and renamed Musa[1].

The Australimusa and Ingentimusa sections were merged into the Callimusa section. The new section kept the name Callimusa. It can be distinguished from the former by referring to it as follows:  Musa sect. Callimusa Cheesman emend. Häkkinen[13].

At the time of the revision, the Musa section included 33 species and the Callimusa one 37.

Sections, as revised by Markku Hakkinen[1]

A subsequent analysis of the maternally inherited chloroplast genome corrobated reducing the number of sections to two[14].

Musa sections revisited published 28 August 2013 in Under the peel, the blog of the ProMusa community