Vitamin A is an organic compound that plays an important role in vision, cell growth and the regulation of the immune system. Like most other vitamins, the body's daily requirement needs to be obtained from the diet to prevent the problems associated with vitamin A deficiency. Retinol, also known as preformed vitamin A, is the main form of vitamin A absorbed when eating foods of animal origin. Plants, however, do not contain preformed vitamin A. Instead they have carotenoids, some of which are converted into vitamin A by the body—the so-called provitamin A carotenoids (pVACs). Unlike retinol, plant carotenoids are not toxic at high levels1 .

Because the white-fleshed Cavendish bananas that dominate the export trade are low in precursors of vitamin A2 , it was long thought that bananas in general were a poor source of this essential vitamin. Interest in vitamin A-rich bananas took off in the early 2000s when analyses done by Lois Englberger and her collaborators revealed that some orange-fleshed cultivars indigenous to the Pacific region, the Fei bananas, have high levels of pVACs3 4 . 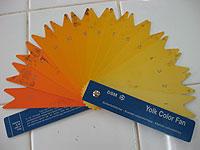 A colour fan developed for egg yolk can be used to rate banana pulp. (Photo by Gerard Ngoh Newilah, CARBAP)

Banana fruits have a relatively simple carotenoids profile. In a screening of 171 cultivars, more than 90% of the total pVACs detected in the fruits were all-trans alpha-carotene (t-?C) and all-trans beta-carotene (t-ßC)5 . The remaining proportion comprised cis-carotenoids—mainly 13-cis beta-carotene and probably also 13-cis alpha-carotene. The only other carotenoid consistently detected in banana pulp are small amounts of lutein and a few unidentified minor compounds6 . There is a positive correlation between the intensity of the pulp's colour and the levels of pVACs in the fruit, especially for the lower colour scores.7 .

The variability of carotenoid content within and between plants, as well as between cultivars, presents a substantial sampling challenge. Moreover, since carotenoids oxidize easily, exposure to light, air and physical damage during storage and transport can affect the rate of carotenoid loss once the sample is removed from the plant.

In an effort to standardize sampling time and methods, the pVACs in the fruit of several banana cultivars were measured to determine the major sources of variability in carotenoid contents at harvest. Since it was not possible to identify a position within the bunch that was most representative, the authors recommended collecting fruit from hands at the proximal end, the middle and the distal end of the bunch to obtain values that are representative for the mean carotenoid fruit content of the sampled plant8 .

The levels of individual and total pVACs also vary during ripening, although the trends seem to be cultivar specific9 10 . Banana is a climacteric crop — its ripening is associated with increased ethylene production — and phytoene synthase, which is considered to control the committed step of the carotenoid biosynthesis pathway, is strongly induced by ethylene during ripening11 . Fruit ripeness can also influence the efficiency of carotenoid extraction due to the breakdown of cellular structure in ripe fruit.

The most popular method used to quantify carotenoids is reversed phase high-performance liquid chromatography (RP-HPLC), which allows the separation and quantification of all individual carotenoids. Spectrophotometry in the visible range is also used to determine total carotenoids content. For banana fruits, whose carotenoids consist mostly of pVACs, vis-spectrophotometry can provide an estimate of the fruits' vitamin A nutritional value. However, both HPLC and spectrophotometric analyses involve lengthy and labor-intensive extraction protocols that increase costs and the chance of by-products formation, and decrease sample throughput. Modifications have been proposed to simplify RP-HPLC 6 , but the approach remains relatively expensive and requires well-equiped laboratories. In a small-scale trial, visible and near-infrared reflection spectroscopy (vis/NIRS), a non-destructive procedure widely used in the food industry, was used to measure carotenoid contents in lyophilized banana fruit and the results compared with HPLC measurements12 . Correlation coefficients were good for total carotenoids and beta-carotenes, and reasonable for alpha-carotene and cis-carotenes, but poor for lutein. Nonetheless, since about 90% of the carotenoids in banana consist of alpha- and beta-carotenes, the results suggest that the technique can be used for the high-throughput screening of total carotenoids content.

Regardless of the approach, the susceptibility of carotenoids to oxidation and degradation means that it is important to prevent loss of pVACs during extraction13 .

Levels of pVACs in bananas

In the early 2000s, analyses performed on several banana cultivars grown in Micronesia revealed levels of beta-carotene ranging from 30 to 6,360 µg/100 gram fresh weight3 4 . The highest values were measured in 'Uht en yap' ('Utin Iap'), a Fei banana from the island of Pohnpei. The values approach the highest ones found in sweet potato, about 8,000 ?g/100 gfw.

A screening of 171 cultivars representing the major Musa genome groups found total pVACs content values ranging from 0 (undetectable) to 3,500 ?g/100 gfw (113.4 ?g/gram dry weight or 211 nmol/gdw)5 . Most genome groups had at least some cultivars with high levels of pVACs (over 95 nmol/gdw). The genome group that had the most cultivars with yellow-orange pulp was the Fei group. African Plantains, Pacific Plantains and AA cultivars from Papua New Guinea also had relatively high levels, with some cultivars having pVACs levels as high as 200 nmol/gdw.  These bananas seem to have in common to be derived from Musa acuminata ssp. banksii, or a species from the Callimusa section (former Australimusa section), and all appear to have originated in the New Guinea area14 .

The screening results support the observation in other crops that carotenoids and pVACs contents are quantitative traits, determined by the activity of multiple gene products, and suggest that the combination of alleles responsible for high fruit pVACs contents is not widely distributed across the Musa genepool. This may be due to either preferential selection by farmers for traits such as disease resistance or white flesh (and thus low pVACs), or the cosegregation of high pVACs alleles with alleles contributing to undesirable characteristics, such as poor agronomic performance. It has been reported that 'Utin lap' grows very slowly15 . Most plantains also have long intervals between cycles due to a slow sucker growth related to a shortage in gibberellins16 . This suggests that flux within the isoprenoid pathway may have been diverted into carotenoid biosynthesis at the expense of gibberellins biosynthesis17 .

Processing can have mixed effects on carotenoid levels. In a study on the retention of pVACs, the levels measured in the fruit of two East African Highland Banana cultivars that had been steamed had either decreased slightly (90-96% of the pVACs in the EAHB cultivar 'Entaragaza' were retained) or increased (the levels of pVACs in the EAHB cultivar 'Mbwazirume' increased by 46-54%)10 . In both cultivars the levels of t-?C — which has only 50% of the vitamin A activity of t-ßC — were higher than those of t-ßC, regardless of whether the fruit were processed or no. Roasting, deep-frying and steaming fruits of the Plantain cultivar 'Manjaya-Gonja' resulted in substantial loss of total pVACs. The highlest loss (58%) was obtained during deep-frying. The levels of t-ßC were higher than those of t-?C in both the raw and processed fruit, but processing increased by about 10% the levels of cis-carotenoids, which have a lower vitamin A activity10 .

The pVACs levels were then converted into t-ßC equivalents (t-ßCE) — using the formula t-ßCE=0.5 t-?C + t-ßC + 0.53 c-ßC — in order to estimate the retinol acitivty equivalent (RAE) based on the assumption that 8.3% of the total t-ßCE ingested are assimilated by the body. The RAEs were then compared to the recommended dietary intakes (RDIs) for a child (6-59 months) and a woman of reproductive age. The results suggest that the consumption of 100 g of the steamed EAHB cultivars would meet more than 27% of the daily vitamin A requirements of a child below 5 years and 15% in the case of a woman of reproductive age. The steamed, roasted and fried Plantain would meet more than 24% and 14% of the daily vitamin A requirements of the respective target groups10 .

Bioaccessibility is defined as the fraction of a compound that is released from its food matrix in the gastrointestinal tract and thus becomes available to the body. An in vitro digestion model was used to assess the bioaccessibility of pVACs from boiled bananas and popular dishes made with the fruit of 'Vulumbya', an EAHB cultivar, and 'Musilongo', a Plantain one. The bioaccessibility of beta-carotene ranged from 14% in boiled 'Musilongo' and 29% in boiled 'Vulumbya'18 . The authors note that these values are high compared to other starchy foods rich in carotenoids, such as orange-fleshed sweet potato. Adding ingredients rich in pVACs, such as palm oil, would further increase the percentage of bioaccessible pVACs.

Strategies to alleviate vitamin A deficiency

Vitamin A deficiency (VAD) is a public health problem in 118 countries, and is most severe in Southeast Asia and Africa, especially among people who are dependant on plant sources for their vitamin A. An estimated 250,000-500,000 children in developing countries become blind each year due to VAD, and more than half of them die within a year of becoming blind. VAD impairs the immune system of 40% of children under 5, who fall prey to common infectious diseases. Over 20 million pregnant women in developing countries also suffer from VAD, leading to increased rates of maternal mortality and with serious health consequences for the unborn babies. The Island Food Community of Pohnpei, in the Federated States of Micronesia, has been at the forefront of efforts to promote the consumption of carotenoid-rich Karat banana and other local foods to alleviate VAD and other diseases linked to changes in diet19 20 . The highest content of ?-carotene measured in a Karat banana was 2230 µg/100 g, or 100 times the ?-carotene content of the common Cavendish banana (21 µg/100 g)21 .

HarvestPlus — which seeks to reduce micronutrient malnutrition by breeding staple food crops that are rich in micronutrients through a process called biofortification22  — has been funding efforts to use bananas to deliver higher levels of pVACs to sub-Saharan African communities that have a high prevalence of VAD. However, since banana breeding is complicated by the high levels of sterility of cultivars, it is also pursuing a strategy of ‘fast-tracking’ carotenoid-rich cultivars23 24 . 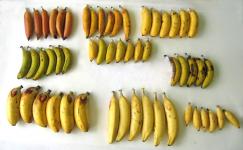 Variation in pVACs levels is a pre-requisite to breeding. (Photo by Mark Davey, KULeuven)

HarvestPlus' breeding strategy is based on combining high pVAC sources with high-yielding and disease-resistant African cultivars23 .

An Australian project to increase pVACs levels in bananas using genetic engineering started in 200725 . Cavendish cultivars 'Williams' and 'Dwarf Cavendish' and the Pome cultivar 'Lady finger' were genetically modified with the objective of transfering the technology to East African highland bananas, the main staple food in Uganda, a country where VAD levels are relatively high26 . Among the genes that have been introduced is the Apsy2a gene from the high-pVAC Fei banana 'Asupina'27 . It encodes the protein phytoene synthase which has a role in an early stage of the pathway that leads to the formation of alpha- and beta-carotene. The regulation of carotenoid biosynthesis in 'Asupina' has been examined and compared to that of a low-carotenoid-accumulating Cavendish cultivar28 .