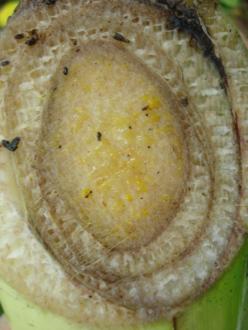 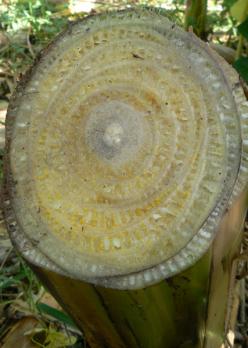 Xanthomonas vasicola pathovar musacearum (Xvm) is the causal agent of Xanthomonas wilt. It was first described as a wilt-causing pathogen on a close relative of banana (Ensente ventricosum) in Ethiopia and named Xanthomonas musacearum[1]. The same bacterium was later confirmed as causing a similar disease on cultivated banana[2] and was subsequently reclassified as X. campestris pv. musacearum[3] (see Bradbury for the full classical taxonomic description[4]). In 2008, scientists argued that it should be reclassified as a pathovar of Xanthomonas vasicola, to which molecular studies had shown that it was more closely related[5]. The new name was published in 2020[6].

The atypical movement of the bacteria inside the plant has led to the development of the single-disease stem removal technique as an alternative to removing infected mats[7]. As long as fresh infections are prevented, the practice of removing only the infected stems has been shown to reduce disease incidence as mats recover under the combined effects of incomplete systemicity and latent infections[8].

Molecular analyses revealed that Xcm was more closely related to the species Xanthomonas vasicola than to the species X. campestris, leading to the recommendation that Xcm should be reclassified as a new pathovar of X. vasicola[5]. A subsequent comparison between a number of bacterial species and 20 isolates from banana and enset in Ethiopia, Uganda, the Democratic Republic of Congo (DR Congo) and Rwanda showed that the isolates were not related to X. campestris but to X. vasicola, supporting the reclassification of Xcm to X. vasicola pv. musacearum[9].

Early molecular characterization of isolates from diseased bananas in Uganda did not uncover significant differences with reference strains collected from diseased enset plants in Ethiopia[11]. Since Xvm is also pathogenic on maize, and maybe sorghum and sugarcane, which are hosts to X. vasicola pathogens, scientists hypothesize that it jumped from one of those three host crops and only recently developed the ability to colonise enset and banana[12]. Draft genome sequences of an isolate from banana in Uganda and of an isolate from sugarcane in Zimbabwe revealed a catalogue of genetic differences, a subset of which may underly the host-jump to enset and banana[13].

A RAPD analysis of isolates collected in Uganda in 2005 revealed a high level of genetic homogeneity[14]. The isolates also behaved the same in a pathogenicity test. The study concluded that the bacterial population in Uganda is clonal and evolving very slowly. In another study, sequence analyses of the ITS loci and the protein-coding gene (gyrB) of 20 isolates collected between 1968 and 2005 from Ethiopia, Uganda, the Democratic Republic of Congo, Tanzania and Rwanda revealed little genetic variation in the pathogen over this 38-year span[9].

Since then, genome-wide sequencing of bacterial isolates from East Africa has revealed the presence of at least two major sub-lineages suggesting that the current outbreaks on bananas in East and Central Africa may have more than one introductory even. Isolates from Uganda, Kenya, Tanzania and Burundi were shown to be genetically distinct from isolates collected in Ethiopia, DR Congo and Rwanda[15].

The first studies on the systemicity of Xvm were done on flower-infected plants to determine the efficiency of cutting the diseased stem at soil level instead of uprooting the entire mat. In a study conducted in Uganda, the aerial stem and rhizome of  'Kayinja' plants were sampled for the presence of bacteria and the results correlated with the progress of the symptoms: shrivelled bracts, decaying rachis, premature ripening of fruits and bunch rotting/drying. The results showed that the bacteria were restricted to the upper part of the floral stem at the shrivelled bract stage only, suggesting that cutting off the infected plant at that stage of the disease would stop the bacterium from invading the rhizome[16]. In contrast, bacteria were detected in the rhizome of a third of the East African Highland Banana plants that were at the stage of shrivelled bracts, suggesting that in the case of an infected EAHB cultivar, removing only the infected plant would not be effective in preventing the disease from entering the rhizome[17]. A later study conducted in Kifu forest, in Central Uganda, found that none of the rhizomes of 'Kayinja' and of an unnamed EAHB cultivar had bacteria 21 days after inoculation, but that 7 seven days later the rhizome of 55% of the EAHB plants and 17% of the 'Kayinja' ones had bacteria[18]. 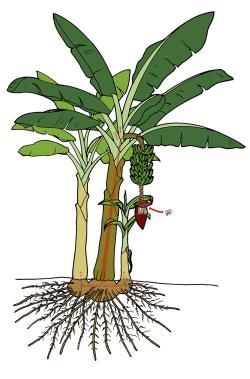 The pattern of movement that emerged from these studies is that when the disease is transmitted by insects visiting the inflorescence, the bacteria enter the rachis through fresh wounds made by recently fallen bracts or male flowers and then move on to the rachis and the floral stem (see photo). As the bacteria move down the floral stem, they first invade the youngest leaves, which are inserted on the floral stem. The older leaf sheaths are invaded last since they are inserted on the rhizome. A separate experiment has found bacteria in the cord roots[19].

The multi-year experiments conducted in Kifu forest were instrumental in showing that the Xvm bacteria do not systematically invade all the suckers on an infected mat. In one of the experiments, four entry points on the inflorescence of  banana plants ('Kayinja' and an EAHB cultivar) were inoculated one week after the formation of the last hand and the mats monitored over time[18]. Only between 6 to 37% of the suckers developed the disease (the highest incidence was observed in the EAHB plants). The scientists tested for latent infections (asymptomatic but infected suckers that may go on to develop the disease). The suckers that were asymptomatic 40 months after the establishment of the trial were assessed for the presence of bacteria by using a PCR test. Trace amounts of bacteria were detected in up to 53% of the sampled 'Kayinja' plants and up to 33% of the EAHB plants. In another treatment in which the bunch was harvested using a contaminated cutting tool, latent infections were detected 24 months after inoculation in up to 45% of the 'Kayinja' suckers and up to 25% of the EAHB suckers[18].

In a separate experiment conducted in Kifu forest, plants of 'Kayinja' and 'Mbwazirume' (an EAHB cultivar) whose inflorescence had been artificially or naturally infected were followed over time[20]. The mother plants rotted away, but nearly all the first, second and third generations of suckers went on to produce edible bunches (each new bunch was covered to prevent contamination by insects visiting the male bud). Latent infections were detected in up to 20% of the third-generation suckers, but when some of them were replanted, only 3.3% of the 'Mbwazirume' and 5.5% of the 'Kayinja' suckers had developed the disease 12 months later[20]. These results confirmed the incomplete systemic movement of the bacteria in banana mats.

The rhizome’s cortex layer seems to act as a barrier to the movement of bacteria. When bacteria were injected directly into the rhizome’s cortex, none of the Mbwazirume plants developed disease symptoms and only 21% of the Kayinja plants did[21]. According to the authors of the study, the movement of the bacteria could be impeded by the low number of xylem vessels in the cortex layer.

These studies showed that, over time, mats will recover from the disease under the combined effects of incomplete systemicity and latent infections, as long as fresh infections are prevented, thereby providing the justification for testing the single diseased stem removal technique in farmers' fields[22].

The first molecular diagnostic tool used pathovar-specific PCR primers designed to amplify a 265-bp region of the gene encoding the general secretion pathway protein D (gspD)[24]. The targeted sequence was later shown not to be unique to the causal agent, and replaced by PCR primers based on five specific coding sequences[10].