Loading...
News and analysis » Banana pathogens: how to leave them behind when travelling

Banana scientists are warned about the risk of spreading pests and diseases.

Nowadays, bananas are cultivated in regions far beyond their centre of origin in Asia. Over time, many of the pests and pathogens that prey on them have also followed. Some, like the fungus that causes black leaf streak, have done so on their own, albeit over relatively short distances thanks to their wind-carried spores. Most, however, have hitched a ride on the bananas themselves. Infected suckers, for example, played a key role in the wide dissemination of the Fusarium wilt pathogen Fusarium oxysporum f. sp. cubense (Foc) and, eventually, the collapse more than fifty years ago of the export trade based on Gros Michel, explains Randy Ploetz, a researcher at the University of Florida in the United States.

Commercial growers in Latin America and the Caribbean survived by switching to resistant Cavendish cultivars. This time around, however, no such candidate is waiting in the wings to take their place should the Fusarium strain that is taking down Cavendish plantations in southeast Asia, the notorious tropical race 4 (TR4), enter the American continent. “It could be tomorrow”, adds Ploetz. “It could be in 20 years. But history suggests that it’s going to happen eventually. Somebody is going to bring it in their luggage, and once it establishes it will be nearly impossible to eradicate and difficult to manage.” 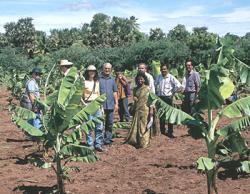 Field visits may spread pathogens.
One possible scenario involves people unwittingly bringing back the soil-borne fungus to their home country on the sole of their shoes after visiting an infected field. To help prevent the introduction of TR4 on the American continent, Dole Fresh Fruit International set down internal rules for its employees travelling between Asia and Latin America, explains Frans Wielemaker, Senior Director of Agriculture Research and Innovation at Dole. Last February, the guidelines were shared with Chiquita and Del Monte representatives and regional scientists attending a meeting in Costa Rica, and improved based on their feedback. The guidelines are now being disseminated with the help of Bioversity International’s regional banana research-for-development networks.

The advice is not just for TR4. It also holds for any pathogen that has not yet reached global status, such as the fungus Mycosphaerella eumusae, which causes Eumusae leaf spot (previously called Septoria leaf spot), Haplobasidion musae, the causal agent of Diamond (or Malayan) leaf spot and the Banana bunchy top virus, which has already made the jump to Africa. The awareness campaign also targets the movement of plants and people to and from Africa, which in addition to being free of some diseases, has at least one that is unique to the continent, namely Xanthomonas wilt.

The first recommendation is to avoid visiting infected farms in the first place but since this is not always practical, travellers are advised to leave behind the clothes and shoes worn during their visit and to wash the other items (hat, backpack, camera bag and the likes). Field tools should be left behind or, at the very least, disinfected according to precise instructions. That goes even if the plantation is reportedly free of the diseases in question and if the traveller only visited the plantation’s office or a packing facility.

Travellers are also instructed not to collect plant and soil samples but if for some reason they have to, they should do so under the supervision of a specialist and observe strict quarantine regulations. No soil, plants or parts of plants should be exported to Latin American, Caribbean and African countries where bananas are grown, unless the planting material has been tissue-cultured and is accompanied with a phytosanitary certificate.

Alas, travellers are also warned to stay away from souvenirs made with any part of a banana plant. However, they still can enjoy the diversity of banana fruits and plants they encounter in their travels and cherish the memories.

The recommendations are available in English, Spanish and French.