Loading...
News and analysis » The spread of Xanthomonas wilt in Burundi

Recent observations of Xanthomonas wilt in Burundi show that the disease is spreading in the border provinces.

The first report1 of Xanthomonas wilt being present in three East African countries, where it is better know under the acronym BXW, cautioned that “the current status of BXW in Burundi is unclear with no recent substantiated reports”. Earlier this year, Burundian scientists confirmed the presence of the disease, but more worrying are recent observations showing that the disease is spreading rapidly, threatening livelihoods unless action is taken.

In November 2010, extension staff in the Cankuzo and Bubanza provinces reported to the National Plant Protection Office (NPPO) in Gitega an outbreak of what looked like Xanthomonas wilt. The NPPO contacted the Institut des Sciences Agronomiques du Burundi (ISABU), and the affected areas were visited by a team of scientists from ISABU, NPPO and CIALCA (the Consortium for Improving Agriculture-based Livelihoods in Central Africa) to identify the disease and isolate its causal agent. The bacterium was isolated at the ISABU plant pathology lab and DNA samples were extracted. The molecular analyses were done by IITA scientists at the National Agricultural Research Laboratories in Kwanda, Uganda, using the recently developed Xcm38R and Xcm38F primers to amplify BXW-specific DNA sequences as markers for pathogen detection. 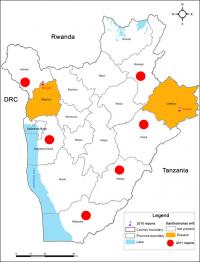 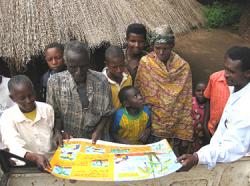 P. Lepoint, Bioversity
The origin of the disease is unclear although insect-driven transmission is suspected in the Kayinja farming systems and contaminated tools and planting materials seem to have played a role in several sites. In the Cankuzo province, the first infection pocket was located some 20 km from the Tanzanian border. Nearly all the bananas on the farm were infected. In the Bubanza province, the infected site was about 20 km from the Congolese and Rwandan borders and the prevalence of the disease lower. Less than a third of the bananas were infected. Since the survey, however, the disease has been reported in 6 more provinces: Muyinga, Ruyigi, Rutana, Makamba, Bujumbura rural and Cibitoke, which literally means the land of bananas (ibitoke being the word for bananas in Kirundi) as befits the main banana-producing region of the country.


Fortunately, it’s not too late to limit the spread of the disease and its impact on livelihoods, as long as new cases are promptly reported and actions are taken to eliminate the disease from infected fields.