A study analyses the factors that favoured the adoption of FHIA-21 in the Dominican Republic.

When speaking of somebody who has integrated in the local culture, the people of the Dominican Republic often say that he or she se aplatanó, from platanó, the Spanish word for plantain. Such is the importance of plantain that when the newly-arrived black leaf streak (BLS) disease (better known as black Sigatoka) reduced yields by as much as 40%, farmers started growing the plantain-like improved hybrid FHIA-21, which in their eyes is a lesser version of their traditional plantain cultivars, except for its resistance to the BLS fungal disease and its high yield.

Fifteen years after the arrival of BLS in 1996, FHIA-21 is estimated to be cultivated on a quarter of the land dedicated to growing plantains. In the region that produces more than half of the country’s plantains, the Cibao valley, 64% of the farmers are now growing FHIA-21, either alone or along with traditional plantain cultivars. According to a study led by Hildegard Garming of Bioversity International’s Commodities programme, the strong attachment to plantain as a staple food is only one of the elements that made it possible for FHIA-21 to gain favour with growers and consumers. The author notes that efforts to introduce improved hybrids elsewhere have not met with similar success, except in Cuba where adoption was imposed by the State. She goes on to analyse the political, legal and market context that contributed to the widespread adoption of FHIA-21.

Garming divides the process into two phases: the technological development phase and the value chain approach that led to the large-scale adoption of the hybrid. After a reform of the land tenure system and investments in the rural infrastructure, the government established an agricultural development agency and, starting in 1992, supported a programme to identify cultivars resistant to BLS. The fungal disease had entered the Caribbean in 1992 and was closing in on the island. FHIA-21, a plantain-type hybrid named after the Honduran research institute that bred it, was identified as a promising alternative to the local cultivars.

The improved hybrid, however, produces fruit that taste different from the local cultivars. Its water content is also higher, requiring specific processing methods. Even when the fruit is still green, which is the stage at which most people use it in cooking, the pulp is softer than that of traditional cultivars. As a result, adjustments had to be made to the way the fruit was handled and processed. 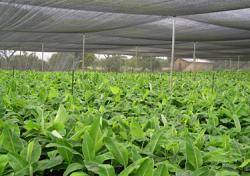 FHIA-21 also requires different production methods. Traditional plantain cultivars are typically grown as monocultures at densities of 1,600 plants/ha. The planting material consists of suckers from farmers’ fields and the average yield is about 10 tons/ha. The creation in 2000 of the Instituto Dominicano de Investigacion Agricola y Forestal (IDIAF) was instrumental in testing and adapting to local conditions modern production technologies, such as increasing planting densities to 2,000 plants/ha, using tissue culture and macro-propagation techniques for rapidly producing uniform planting material, frequent replanting, irrigation for off-season production and the use of cover crops and fertilizer.

Public investment in agriculture and research contributed to the adoption of FHIA-21, notes the main author of the study, but she also points to the policy of provisioning farmers with planting material after the 1998 and 2004 hurricanes. “Some farmers”, she says “are reluctant to invest their own funds in regularly renovating their plantations and tend to wait for government help.” 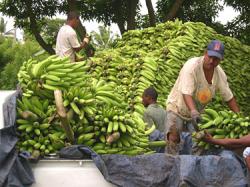 From a market perspective, Garming mentions the establishment in 1996 of the Frito Lay processing plant in Santo Domingo as a critical factor. At first, the company was buying local plantain cultivars to make chips, but soon ran into supply problems because of the seasonality of production. In 2002, Frito Lay agreed with IDIAF to test FHIA-21 and to buy the production from a 25-hectare IDIAF commercial test plot in Montecristi. Following the success of these tests, Frito Lay switched to using FHIA-21 and started contracting farmers and providing them with planting material. Frito Lay also helped validate the methods for multiplying planting material and establishing nurseries.

FHIA-21 is now traded and accepted as fresh fruit on the market. Nevertheless, Dominicans still prefer their local plantain cultivars and are willing to pay more for them. Being 30-40% cheaper, FHIA-21 is primarily bought by poorer consumers and those who have learned to appreciate its softness and shorter cooking time for preparing mashed green plantain.

What the supporters of FHIA-21 have done is turn the threat posed by BLS into an opportunity and, in the process of opening up a new market for agro-industrial processing, also facilitated the introduction of the new variety to fresh markets. Currently, only four FHIA-21 farmers satisfy the major part of the demand for raw material for processing. Meanwhile, however, the other farmers, regardless of whether they grow FHIA-21 or traditional plantains, continue to have limited access to markets – local rules dictate that farmers sell their crop to intermediaries – and are still at the mercy of fluctuating prices. Beyond the impact of switching to a disease-resistant hybrid, what the study shows is how improving productivity and marketing can benefit Dominican farmers.