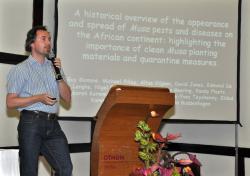 Photo by Hitanêz Freitas
In Burundi, when it comes to controlling bunchy top, knowledge does not automatically translate into action.


As a non-native to Africa, the banana has not had to do battle with pests and diseases for a long time after its arrival on the continent, estimated at more than 2,000 years ago for Plantains and East African Highland bananas. Other types of dessert and cooking bananas are also believed to have been introduced as long as 1,400 years ago, most likely by Arabian traders. By comparison, the pests and diseases responsible for the most conspicuous damage done to the crop are recent arrivals, as Guy Blomme of Bioversity International showed in the historical review he presented at the fourth ISHS-ProMusa symposium in Brazil. The first records date back to the early 1900s, but the number of new reports increased dramatically after 1950. The scientist’s detective work suggests that many pathogens were introduced and disseminated by botanical gardens and research stations through infected planting material.

This long interval without major pests and diseases no doubt bolstered the banana’s reputation as an easy crop to grow, as Winston Churchill noted in his book My African Journey, published in 1909. After describing Kampala, the capital of Uganda, as "invisible" for being concealed by the "leaves of innumerable banana plantations”, the British statesman remarked how the country’s staple crop "once planted, grows and propagates of its own accord" sustaining the population "year after year in leisured abundance".

Photo by Hitanêz Freitas
Bananas used to be a blessing for African resource-poor farmers, until pests and diseases started taking their toll. In Burundi, for example, Kayinja, the preferred cultivar for brewing beer, has become increasingly rare because of Fusarium wilt. It has been replaced by Yangambi km 5, only to be threatened by bunchy top. A project to manage bunchy top with cultural practices has met with some success, but the disease bounced back soon after it ended, as shown by the results presented by Pascale Lepoint of Bioversity. The project, conducted in collaboration with the University of Burundi and ISABU (Institut des Sciences Agronomiques du Burundi), followed 19 farmers from Munyika in the Cibitoke province, whose name means "land of bananas".


The first thing the scientists did was survey the participants to assess their knowledge of the disease. Bunchy top is caused by the virus of the same name, which is transmitted from plant to plant by the banana aphid Pentalonia nigronervosa. Farmers can also unwittingly spread the virus by exchanging infected suckers as planting material. Tissue-culture plantlets which have not been certified virus-free can also spread the virus. If the infected plant is in a mat, the virus will eventually spread to the other plants. Infected plants usually do not produce fruits.

Even though there is no cure, and truly resistant cultivars have yet to be found, the disease can be contained by uprooting infected plants, controlling the aphids and replanting with clean planting material. Strict quarantine measures on the movement of planting material can also be put in place to prevent the introduction of the virus in unaffected areas.

Celestin Niyongere, the head of the fruit and legume programme at ISABU, examining banana plants showing symptoms of banana bunchy top disease.
The stunted growth and rosette appearance of infected plants are very characteristic. Not surprisingly, most farmers were familiar with the advanced stages of the disease, although not with the initial ones. The surveyed farmers also did not know how the disease spread, much less that control measures existed.


The Munyika farmers received training in the identification, transmission and control of bunchy top, and were followed for a year during which group and individual meetings were regularly scheduled to assess progress and identify problems. At the end of the year the average proportion of infected plants in farmers’ plots had gone down from 26% to 8%, and 63% of the participants were scouting their fields every two weeks for signs of infected plants. But while nearly all of them would cut down symptomatic plants during inspection rounds, only 22% also removed the rhizome. None of the farmers acted on the recommendation to uproot the entire mat when only one of the plants showed symptoms. It’s possible, points out Pascale Lepoint, that the farmers were hoping that the mat would still produce bunches, having seen it happen in large infected mats, probably because the rhizomes were not connected.

The Bioversity scientist also notes that “traditionally, Burundian farmers devote little time and labour to maintaining banana mats”. Indeed, when the visits ceased and farmers were left to themselves, most of them stopped scouting for sick plants and only a handful continued to manage their fields. Six months after the end of the project, the prevalence of the disease had crept back up to 15%.

Even though arming farmers with knowledge had an impact, it did not necessarily have a permanent effect on their behaviour. The supporting environment of the project also turned out to be a factor. Given that the virus cannot be effectively contained unless everyone chips in, the message the study sends to government extension services is that putting in place regular follow-ups would help farmers stick to a regimen of control measures.