Loading...
News and analysis » A global effort to contain a global threat

Recent advances have paved the way for a global effort to address the dreaded TR4 fungus.
The spread of Fusarium wilt, which became better known as Panama disease after reaching Latin America, tipped the balance in favour of cultivars that are resistant to the race 1 and 2 strains of the pathogen that cause the disease. One of the reasons the possible spread of tropical race 4 (TR4) to Latin America and Africa raises so much concern, is that so far it attacks the cultivars on which most of the world’s production has come to depend. 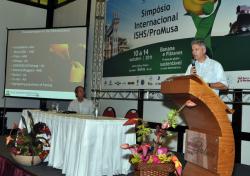 In a rare piece of good news, presented at the fourth ISHS-ProMusa symposium in Brazil, a team of scientists, led by Gert Kema of Wageningen University in the Netherlands, confirmed the little-known finding that Musa acuminata ssp. malaccensis has genes of resistance to TR4[1]. The subspecies is one of four acuminata subspecies whose molecular signature has been found in banana cultivars, (in genebanks, the accession of the subspecies is sometimes known as Pahang, after the province in Malaysia where it was collected). What makes this announcement particularly topical is that, in the meantime, a doubled haploid version of the subspecies, DH Pahang, has had its genome sequenced.

Kema and his colleagues noted the resistance while testing the greenhouse bioassay they had developed. Six of the eight genotypes that were screened (four triploid cultivars, one diploid cultivar and Musa acuminata ssp. banksii) succumbed to the disease after being inoculated with the TR4 strain of Fusarium oxysporum f. sp. cubense. Only Pahang and DH Pahang showed some level of resistance.

Looking for more variability, the scientists then tested a segregating population of 80 plants generated by colleagues at the French agricultural research centre CIRAD. The results did not disappoint. The progeny of a cross between two malaccensis could be divided into three groups (susceptible, moderately resistant and resistant), indicating that both parents were heterozygous and hence segregated for TR4 resistance.

"We have started to explore the genetic basis of resistance using this segregating population", says Kema, who adds that part of the work will continue through a recently approved 3 million euro project funded by Wageningen University’s Interdisciplinary Research and Education Fund (INREF). The five-year project, Panama Disease: Multi-level solutions for a global problem, will bring together 30 partners to address the management and containment of Fusarium wilt under different production systems, agro-ecological conditions and governance structures.

In addition to having a rapid diagnostic test for TR4 and a reliable method for screening cultivars under greenhouse conditions, which will be used to screen more accessions from the international Musa collection held at the ITC in Belgium, the partners of the project are looking forward to the upcoming release of the sequence of DH Pahang. "It’s a happy coincidence that the accession chosen for the sequencing of the first banana genome can help us understand the mechanisms of resistance to TR4", notes Kema. "I am confident that concerted action of relevant stakeholders along the banana chain can prevent TR4 from having the same dramatic consequences as race 1."

1. Some of the malaccensis accessions field evaluated in Australia’s Northern Territory by scientists at the Department of Primary Industry were resistant.