Can the origin of a banana indicate whether its production is sustainable?

In Australia, the bananas from New South Wales have started advertising their origin. The move was prompted by market studies confirming that the subtropical bananas have a more intense flavour than their tropical counterpart from Queensland and, more importantly, that consumers can tell the difference. The distinct flavour is thought to come from the slower growth and longer filling time. 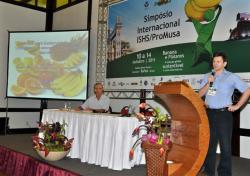 Photo by Hitanêz Freitas
Unfortunately for consumers in banana-importing countries, traits imparted by the environment do not travel well. Agrofair, a European importer and distributor of Fairtrade and organic tropical fresh fruit, experimented with importing bunches of Gros Michel produced in southern Ecuador’s hillside agroforestry systems. However, once arrived in the Netherlands, the ‘mountain grown’ bananas were not notably different from the Cavendish sold in supermarkets, as Ben Huyghe from Agrofair explained to the audience attending the fourth ISHS-ProMusa symposium in Brazil. The Gros Michel bananas did not have the same aroma and taste as in Ecuador, most likely because they had been harvested green, whereas the bananas eaten locally ripen on the plant.


The trial was part of a search for a business model for sustainable export bananas. As Huyghe pointed out, even organic certifications do not cover the breath of issues that determine sustainability of a production system, such as land and water use, biodiversity, mitigation and adaptation to climate change, and waste and pest management. Moreover, the existing standards and certifications focus on the farm, product or organization, leaving out interactions with other dimensions such as the territory, watershed or agroecosystem. 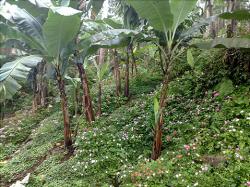 Photo by Ben Huyghe
To test the feasibility of developing a territorial approach capable of taking into account these considerations, Agrofair and the foundation TASTE initiated in-depth case studies of two organic banana production systems in their territorial context: the savannah of northern Peru, where a thriving export industry based on monocultures has developed around the Chira and Piura rivers, and the mountains of southern Ecuador, where bananas are produced in agroforestry systems by farmers belonging to the ASOGUABO association.


The studies showed that the Ecuadorian agroforestry farms contribute to the conservation of biodiversity, and so do the banana plantations of northern Peru. Many of the species from the region’s rapidly shrinking dry tropical forest have found refuge in the banana plantations. Both production systems also appear to have a relatively low carbon footprint, at least compared to other Agrofair producers in Panama and Costa Rica, according to preliminary assessments carried out by Fairtrade International. 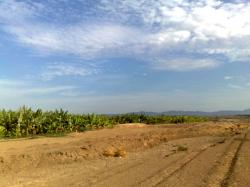 Photo by Ben Huyghe
On the other hand, the melting glaciers in the Andean mountains are threatening the supply of water to the lowlands of northern Peru and southern Ecuador. Irrigation water is already a limiting factor for the Ecuadorian agroforestry farmers, who are operating at the edge of profitability due to low productivity and high transport costs. The Peruvian banana growers are better off, but even without the menace of climate change, they are facing water problems. Sedimentation is reducing the capacity of the reservoirs and the presence of a growing agro-industry is exacerbating competition for water.


To the question as to whether these production systems are sustainable, Huyghe recognizes that they are not, at least not yet. But had they been, Agrofair wanted to know whether supermarkets would have been interested in promoting sustainability themes through bananas carrying a denomination of origin such as ‘mountain grown’ or ‘savannah grown’. The general response from the supermarkets they surveyed was not encouraging. For one thing, as the experience with the Ecuadorian bananas showed, the internationally traded bananas are fairly uniform, one reason why branding them has rarely been successful. Supermarkets are also reluctant to promote complex messages to consumers, says Huyghe. And for a good reason, it seems. According to research conducted in the Netherlands, the three most important factors entering in the decision to buy a product are taste, quality and price. Sustainable issues like animal welfare, environment and developing countries play a part, but only for less than 20% of consumers.

Huyghe is not deterred. “This does not mean that supermarkets are written off as allies in a territorial approach for a more sustainable export banana. Supermarkets who want to show that they take corporate social responsibility seriously could do it by entering into long-term relationships with certain sourcing regions.”

If and when it is achieved, sustainability may not translate into better tasting banana for consumers in importing countries, but it should make them feel better about buying them.