Nematode-induced toppling
Plant-parasitic nematodes often go undiagnosed until a banana plant topples over, its roots eaten away by the minute roundworms, or until an expert in nematodes comes around, as nematologists sometimes say in jest. This is because most people don’t immediately think of nematodes when they see a plant growing more slowly, taking longer to fruit and producing a smaller bunch – typical symptoms of a moderate infection. The fact that nematodes are all but invisible also makes it difficult for farmers to notice them.


Adding to the problem is the practice of growing bananas in monocultures, which allows nematodes to proliferate. In commercial plantations nematodes are often controlled with nematicides. These products, however, are increasingly condemned because of their toxicity. Participants at the recent World Banana Forum Conference identified nematicides as one of the top three products impacting environmental and human health and called for a reduction in their use.

In the French West Indies, where carbamate and organophosphate nematicides have been gradually banned, the search for alternatives is well under way. One of the innovations developed by scientists from the French agricultural research centre CIRAD consists in replacing bananas with a non-host crop, or leaving the land fallow for a year or so, in order to eliminate the nematodes in the soil. To avoid reintroducing nematodes when bananas are replanted, farmers are advised to use pest- and disease-free plantlets produced through tissue culture (TC plantlets for short).

When the approach was first applied on the island of Martinique, the number of nematodes quickly built up after only one production cycle. The unexpected result was attributed to the mechanical method used to destroy the banana plants which, by leaving behind viable bits of rhizome, provided a safe haven for nematodes. Experiments led to the recommendation of injecting plants with glyphosate, a broad-spectrum systemic herbicide, and coming back to remove escapees and regenerated shoots. Even if the practice translates into more herbicide being used, the net result is still positive for the environment since glyphosate is far less toxic than nematicides and the doses used much smaller. Increases can also be offset by other practices that reduce herbicide use, such as planting a cover crop which, depending on the species, has also been shown to help keep nematodes in check.

“The crop rotation and TC plantlets system has made it possible for farmers to grow bananas for 3 to 5 years without having to use nematicides”, says Sébastien Zanoletti, Director of sustainable development at the Guadeloupe and Martinique banana producers union UGPBAN. Fourteen years after it was first introduced, the combination of a fallow, or crop rotation, and TC plantlets has led to a 90% reduction in the quantity of nematicides being used. Not all farmers, however, have adopted the cropping system.

A survey of 607 banana farmers indicates that in Guadeloupe 67% of farmers rotate bananas with another crop or a fallow period, and 59% use TC plantlets, compared to respectively 28% and 24% in Martinique. “The adoption rate tends to be lower in small farms”, says Jean-Marc Blazy of the French national institute for agricultural research INRA, “especially in Martinique. Lack of land is an obstacle, but the initial high investment is also an issue. Our simulations for a 4.2-hectare farm show a decline in revenues for the first two years and a half. After that transition period, however, revenues increase considerably compared to the pre-conversion level.” Moreover, the fact that in Guadeloupe farms are more diversified are farmers better informed than in Martinique may explain the larger proportion of farmers having adopted the practices, adds Blazy.

Planting resistant varieties, either singly or in mixtures, is also an option, especially for smallholder farmers who cannot afford crop rotations or fallows. Experiments in Martinique have shown a reduction in the densities of nematodes following the introduction of the relatively resistant FB924 variety, an improved hybrid produced by CIRAD breeders, in a field of more susceptible Cavendish or plantain cultivars.

GM bananas are not among the options proposed to the growers in the French West Indies, but in GM-friendly Uganda farmers may one day have access to cooking bananas genetically modified to be resistant to nematodes. Scientists at Uganda’s National Agricultural Research Organization and the International Institute of Tropical Agriculture are respectively transforming cultivars of East African highland banana and plantain, in collaboration with scientists at the University of Leeds, who supplied the gene constructs.

The strategy consists in introducing two genes with different modes of action to make it harder for nematodes to overcome the plant’s defence mechanisms. One of the genes codes for cystatin, a protein that by disrupting digestion essentially starves the nematodes, but only after the nematodes have started attacking the roots, since the cystatin needs to be ingested. The cystatin introduced in the plantain cultivar comes from maize, while the one in East African highland banana cultivar is derived from rice. 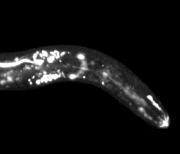 Uptake of fluorescent peptide by Radopholus similis
The other introduced gene codes for the production of a peptide, a short protein, that when secreted by the plant’s roots disorients nearby nematodes, preventing them from entering the roots. A fluorescent form of the peptide was used to reveal how it is taken up and transported to the nematode’s chemoreception cells, where it binds to nicotinic receptors.


In a greenhouse trial of 18 lines of the plantain cultivar Gonja manjaya, the GM plants that had the largest effect on nematode numbers, compared to their non-transgenic counterparts, were the ones that had the cystatin gene only. They reduced nematode numbers by 84%, compared to 66% for the plants that had the peptide gene only and 70% for the plants with both genes. The four best performing lines will be further evaluated in a confined field trial in Uganda later in the year, along with other transgenic lines of plantain and East African highland banana. Their performance will be compared to plants of the same cultivar that have been submitted to the same transformation process, but into which no new genetic material has been introduced.

The University of Leeds has donated its patents so farmers in developing countries would not have to pay extra for GM bananas. The question is more how will farmers access them. The delivery system will most likely rely heavily on TC plantlets, a system that is currently underdeveloped in East Africa, but should be in better shape by the time these nematode-resistant transgenic bananas become available.