Loading...
In pictures » The puzzling bananas of Solomon Islands 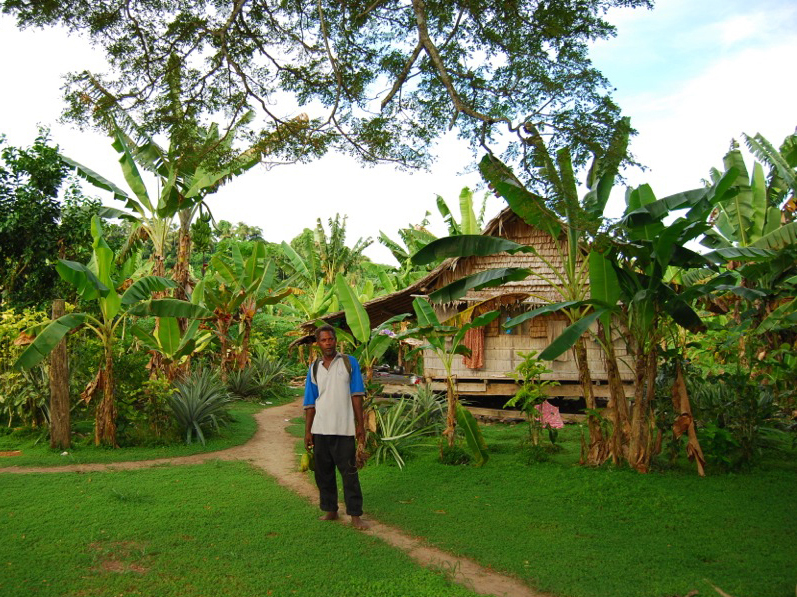 The main activity of people living in the Solomons is subsistence agriculture. Although bananas are common, their diversity is threatened by the consumption of imported foods at the expense of locally grown crops. This shift in diet has been linked to an increase in non-communicable diseases such as diabetes, cardiovascular diseases and certain types of cancers. (Photo Gabriel Sachter-Smith)

The islands lie close to the eastern limit of wild bananas. The bananas in the left corner of the photo are an unknown wild species, possibly new, that belongs to the Australimusa section. The species in this section have distinctly shiny bracts and 10 pairs of chromosomes, compared to 11 for the species in the Musa section, which are at the origin of most edible bananas. (Photo Gabriel Sachter-Smith) 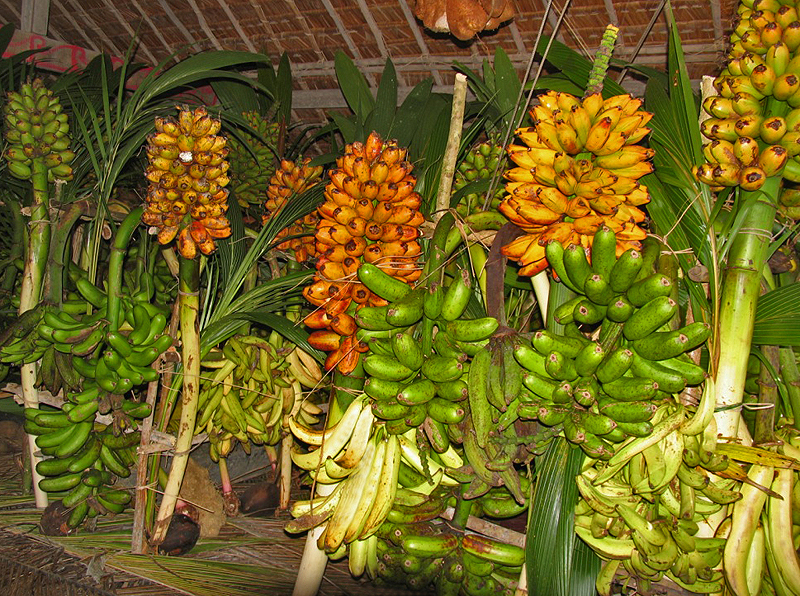 At first glance the diversity of bananas reflects the proximity to PNG, but too little is known about the diversity in either country to fully understand their interrelationships. Efforts to conserve bananas are similarly under-resourced, making it easier for nature to regain her place. (Photo Jeff Daniells) 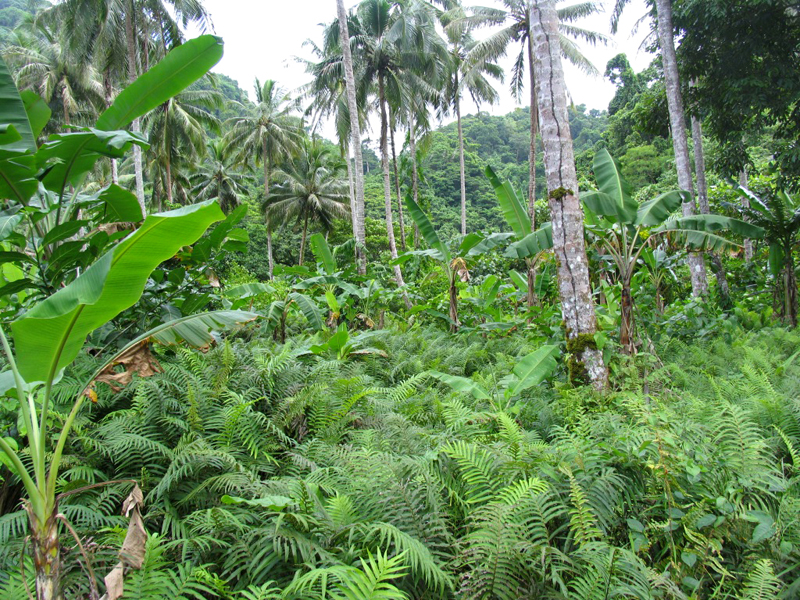 In 2002, a collecting mission on Makira, known among islanders as “banana island”, led to the establishment of a field collection at the Manivovo rural training centre on the island’s weather coast. However, when Jeff Daniells from Australia visited it in 2007, the original plantings had either been lost, overtaken by weeds or moved to another location. (Photo Jeff Daniells) 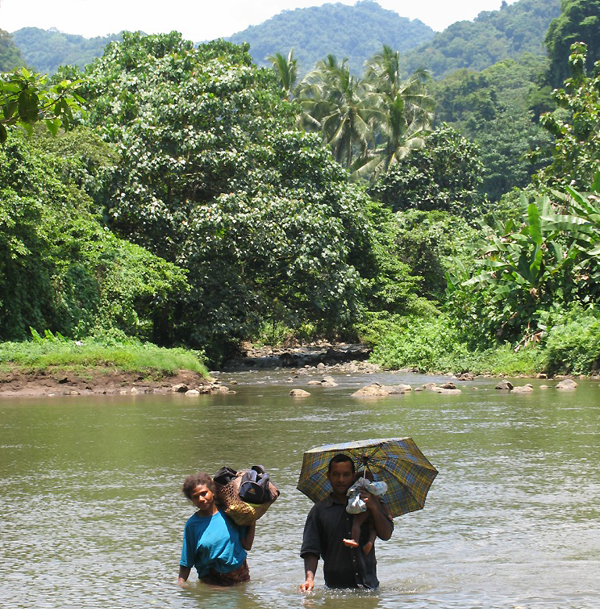 The horticultural scientist and veteran of collecting missions in PNG had traveled to Makira to survey the diversity of bananas. He also visited the collection set up by Dorothy Tamasia near her village, a 4-5 hour walk and several river crossings from the small town of Kirakira. Dorothy, pictured with her husband and one of her children, possesses a remarkable knowledge of the cultivars in her care. (Photo Jeff Daniells) 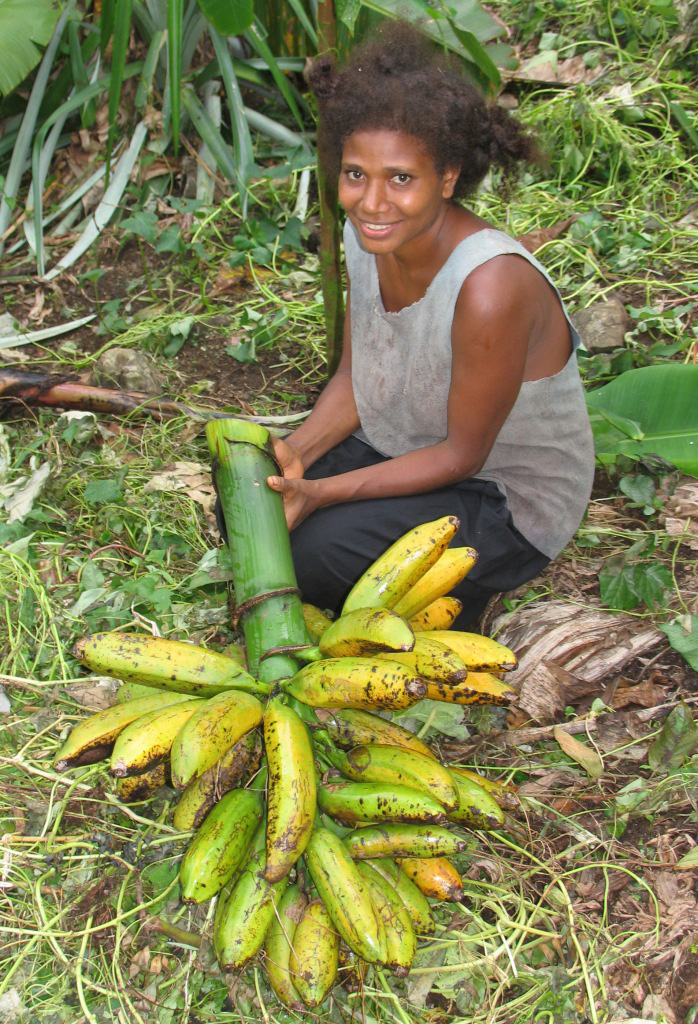 Dorothy categorizes the accessions in her collection into 2 groups: the short-term cultivars that need to be replanted every year (most likely diploids) and the long-term ones that can survive at least 5 to 6 years without replanting (hardier triploids). She has since moved her collection to a new site, where ditches are being dug to improve drainage. (Photo Jeff Daniells) 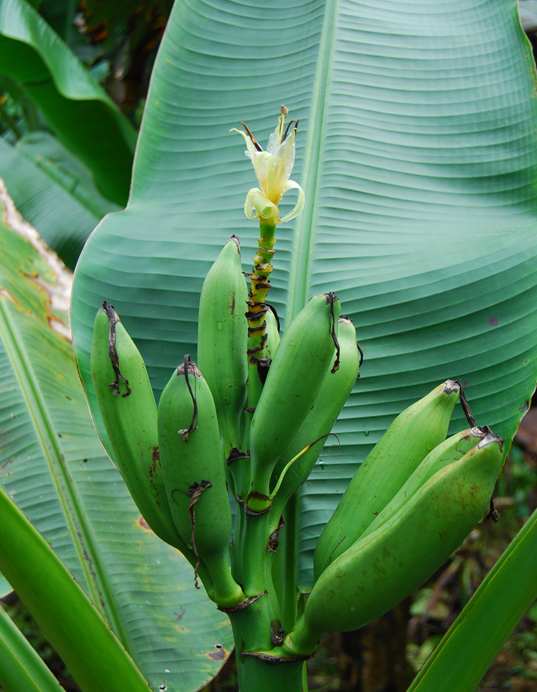 Makira is one of the few places where Fei bananas, which are derived from Australimusa species, are still cultivated. Recognized by their erect bunch, they are also known for having high levels of carotenoids, which the body transforms into vitamin A. In 2007, the carotenoid levels of 7 Fei cultivars, including this Toraka Gatagata, were found to meet the estimated daily vitamin A requirements for children and non-lactating, non-pregnant women. The results were disseminated to dispel the widespread belief that imported foods are superior to traditional ones. (Photo Gabriel Sachter-Smith) 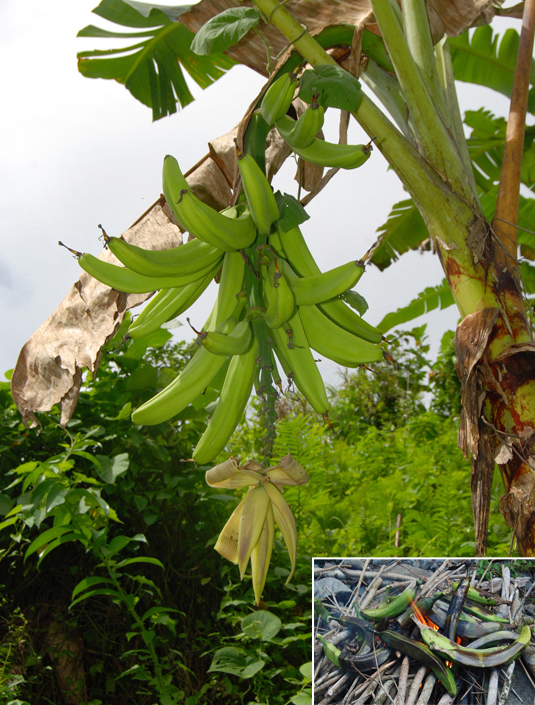 As part of a "Go Local" campaign, 4 banana collections were set up by the Kastom Gaden Association with the help of the Christensen Fund. In 2011, Gabriel Sachter-Smith, a graduate student at the University of Hawaii, was funded by the Global Crop Diversity Trust to train the curators. One of the cultivars he observed at the Atoifi collection on Malaita Island is Baba Ka’a, which means 5 minutes, in reference to its quick cooking time. (Photos Gabriel Sachter-Smith) 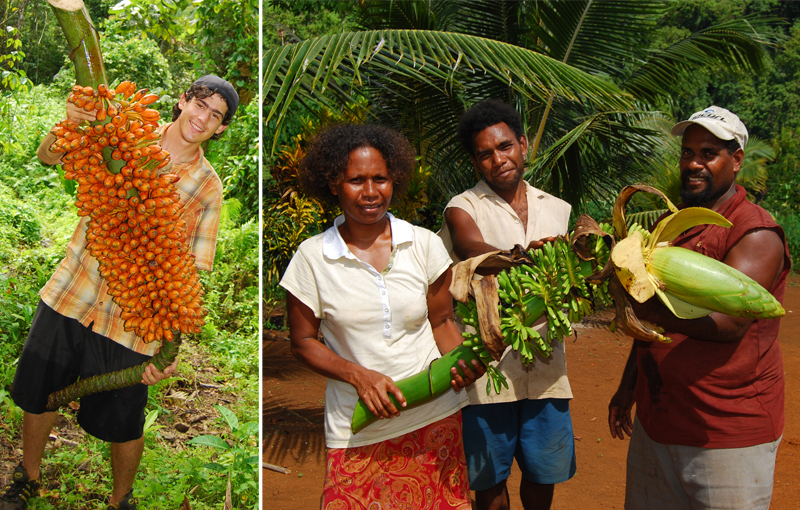 A second collection is located at Jordan village, a short motorboat ride from Atoifi to the mouth of the Kwaibaita River followed by a 4-5 hour walk upriver. The Kwaibata valley is full of wild Australimusa, which seem to be different forms of the same species (held by William Suufa and Mary Timothy). A literature search suggested to Gabriel (left photo) that it is either related to Musa bukensis from PNG or is a new species. (Photos Gabriel Sachter-Smith and Mary Timothy) 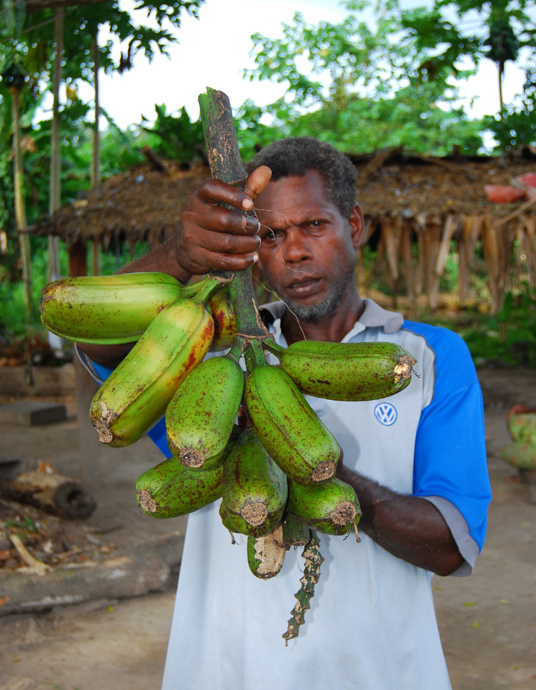 The other two collections are on the main island of Guadalcanal, near the capital Honiara. One is close to the airport and the other is 25 km away at Sasa. It is maintained by Regional Boni, seen in the photo holding a Popoulu banana called Chuchu Chichi. Its fruits usually have more red, hence the word chichi in its name, which means red. Chuchu is a generic name for Popoulu bananas which, along with Maolis and Iholenas, form the loosely called Pacific plantains. (Photo Gabriel Sachter-Smith) 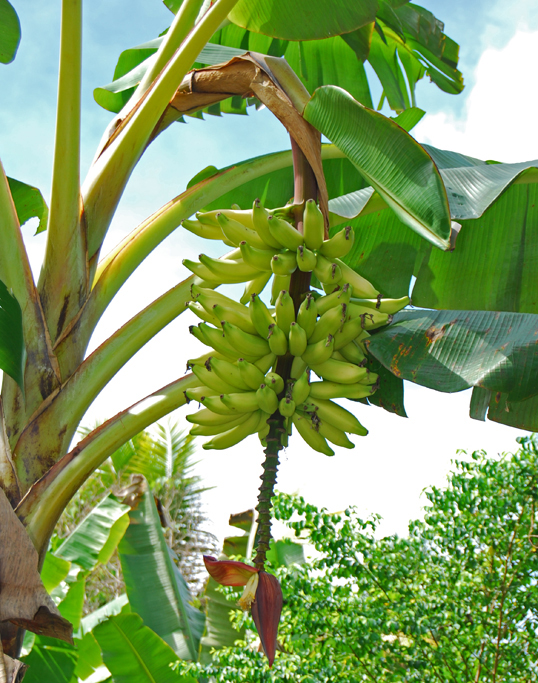 One of the Solomon Islands’ few Iholenas is Gerei Langi, also locally known as Kolale. Like the other Pacific plantains, they are relatively uncommon in the western Pacific, where they have been domesticated. They are more common further east, where they have been introduced by Polynesian settlers. (Photo Gabriel Sachter-Smith) 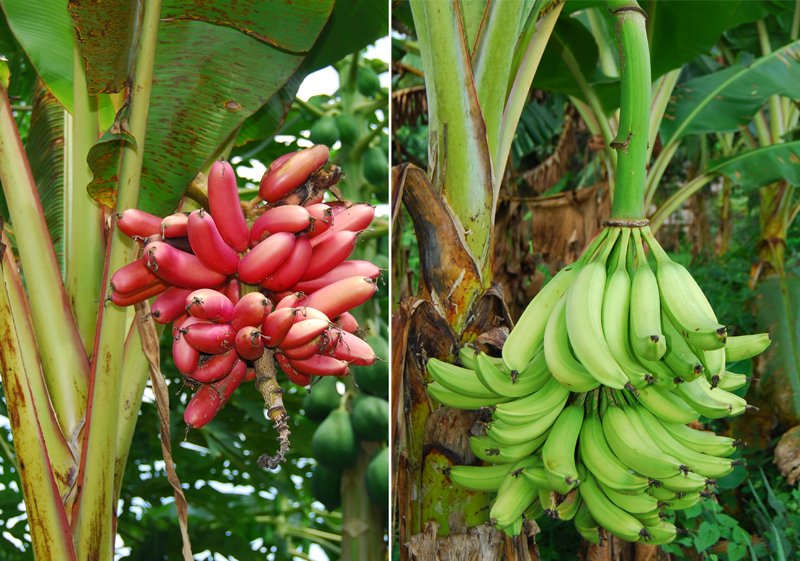 With PNG, the Solomon Islands is the only place where diploid bananas are still relatively common. The photo on the right is the popular cultivar Broken Heart. To islanders, having a broken heart over something means that it is loved very much. Judging from the ubiquity of this cultivar, it must indeed be the case. The left photo is the bright red Ruhuvia Chichi. (Photo Gabriel Sachter-Smith)

Edible diploids are usually derived from Musa acuminata. Musa balbisiana is generally not believed to produce parthenocarpic fruits. If it is shown that Mota, an edible banana very reminiscent of Musa balbisiana, has not hybridized with acuminata, it will upset current views on the domestication of bananas. (Photo Gabriel Sachter-Smith) 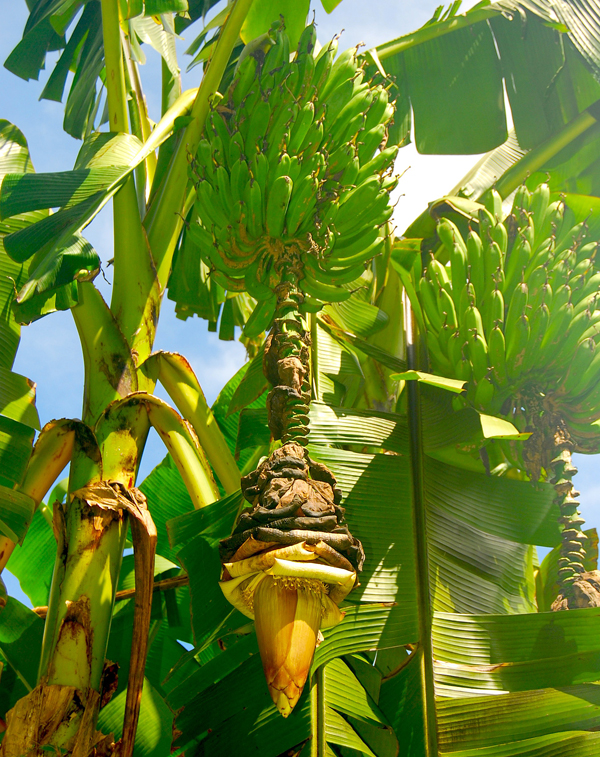 Gabriel also visited Dorothy on Makira. Near the airport he saw an edible banana that looked like a hybrid between an Australimusa and a Musa species. Yet another mystery about bananas that could help solve nutritional and scientific problems, but have so far received little attention outside their equally mysterious islands. (Photo Gabriel Sachter-Smith)