Loading...
News and analysis » Will growing bananas in the subtropics become easier with climate change? 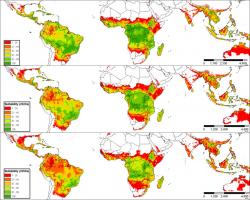 Click on image to enlarge
Bananas in the subtropics tend to be less exposed to pests and diseases, but other aspects of their cultivation require mitigation measures to offset the generally colder and drier climate. But even if temperatures increase, as they are expected to under climate change, it will not necessarily translate into a noticeable increase in rainfed cultivation of bananas in the subtropics, according to a study by scientists from Bioversity International, the International Centre for Tropical Agriculture and The University of Western Australia.


The authors of the study looked at nine subtropical regions in Africa, South America and Asia, four of which are at present reasonably well suited to banana cultivation: Paraguay, Formosa province in Argentina, the Mozambique-South Africa border region, and the southern coast of China, including the island of Hainan. They mapped the areas currently suitable for growing bananas and made projections for 2020 and 2050 using the Eco-crop model and a set of 19 global climate models. The emission levels of greenhouse gases in the model are those of scenario A2, in which technologies that reduce emissions spread slowly between countries. A location is considered as optimal when the temperature oscillates between 17.5 and 26.3°C and rainfall is between 900 and 1,760 mm/year. An area where the temperature falls below 12°C or exceeds 33°C and rainfall is less than 200 mm/year or more than 4,000 mm/year is considered as unsuitable. Everything in between is deemed more or less suitable.

The results presented during the 28th International Horticultural Congress in Lisbon, Portugal, suggest that Paraguay, Formosa and southern coastal China will become less suitable, whereas the Mozambique-South Africa border region should remain more or less the same. While suitability is expected to increase in some of the other regions, none of the locations is predicted to become highly suitable for banana production. Even though temperature is expected to increase in places where winter chills are currently a constraint, rainfall should continue to be a limiting factor. High summer temperatures may also become increasingly problematic.

The authors also highlighted certain limitations with the current version of the Eco-crop suitability model for banana which, among others, does not take into account the distribution of rainfall. Similarly, current versions of climate change models do not predict extreme events such as frequency of frosts or heat waves, which are important for a semi-perennial crop such as banana.

Abstract of the paper in the proceedings of the symposium: Citrus, bananas and other tropical fruits under subtropical conditions