Loading...
News and analysis » The effect of tillage on soil and yield

Tillage is usually not an issue in perennial banana cropping systems, but scientists in the West French Indies looked into the matter to determine whether periodical tillage is necessary to maintain high yield. 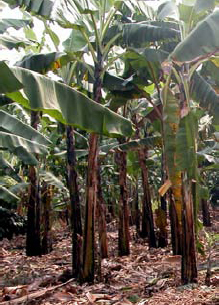 CIALCA
In the West French Indies, soil is tilled on average every five years when plots are replanted. Even though tillage is said to increase erosion and reduce the soil’s capacity to stock organic carbon, in this case banana farmers consider that periodical tillage and replanting are necessary to increase soil porosity and maintain high yields.


Scientists at the CIRAD experimental station of Neufchateau in Guadeloupe tested this assumption on a one-hectare banana field that had been under fallow for a year and during which time the cover crop Brachiaria decumbens had been planted. In the no-till treatment, seedlings derived from tissue culture were planted in holes and the cover crop was left on the soil. The conventional tillage treatment consisted in two successive passes of a heavy spading machine before planting the seedlings, causing the cover crop to be buried.

Even though the study lasted less than a year, the plants in the no-till plots had a larger girth at flowering than the ones in the conventional tillage plots. The plants flowered earlier and the average number of fruit per bunch was also higher, but the differences were not significant. The authors of the study attribute the better growth to the protective effect of the mulch in reducing evaporation.

The authors also observed that the no-till treatment was better at preserving the soil’s biological and physical properties. Tillage initially improved soil porosity, but the effect did not translate into a deeper extension of the root system and had dissipated eight months after planting.

Given that tillage did not improve plant growth in the short-term and that the differences between the no-till and tilled plots can only decrease over a longer period, the authors conclude that farmers are better off using mulch and foregoing tilling when replanting bananas.