A study shows that Ugandan farmers growing coffee and bananas together are better off than those who grow each crop in monocultures. 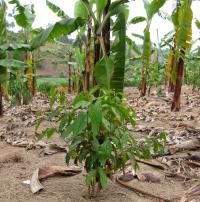 Pascale Lepoint, Bioversity
Uganda is the largest producer of bananas after India and the second largest producer of coffee in Africa. To feed the demand for these crops, most Ugandan farmers grow them in monocultures, but sometimes the crops are also mixed, especially in highly populated areas. According to the information provided by farmers as part of a USAID-funded study done by the International Institute of Tropical Agriculture (IITA), intercropping banana with coffee is more profitable than growing either crop as a monoculture.

In the Arabica-growing region of Mt Elgon, annual returns per hectare on mixed farms averaged 4,356 USD compared to 1,533 USD and 2,364 USD for banana and coffee monocultures respectively. In western Uganda, the returns to farmers tending Robusta coffee fields were lower, but still higher when bananas were intercropped with coffee (1,827 USD) than when bananas or coffee were grown alone (1,177 and 1,286 USD respectively). Since coffee yields were essentially the same in both systems, the extra revenues came from adding banana plants. IITA scientists recommend planting two coffee trees for each banana plant.

Farmers reported that bananas provide shade, mulch, nutrients and moisture to young coffee trees. These beneficial effects may particularly be relevant to increase the resilience of the coffee production systems when temperature increases and rainfall becomes more erratic due to climate change, says Piet Van Asten from IITA.

The permanent nature of the banana and coffee canopy and root systems also strongly reduces erosion in hilly regions, one of the reasons the practice is being tested in Burundi as part of the CIALCA project. On-farm evaluations of the agronomic performance of each crop in monocultures and at the borders of coffee and banana fields have started in 2008 along with on-station trials to determine the optimal densities of bananas and coffee.

For more information or to obtain a copy of the report, contact Piet Van Asten