How Linnaeus inadvertently muddled the taxonomy of bananas when he gave Latin binomials to two edible bananas. This is the first of a two-part series on the classification of edible bananas. Part two is on modernizing the nomenclature system specific to edible bananas.

"Surely there is no other science in which the errors of the past are preserved by law to confuse the present", said Normand Simmonds in his 1991 address to the Society for Economic Botany. The author of two influential books—Bananas, and The evolution of the bananas—was referring to the nomenclature system formalized by Carl Linnaeus. It consists in giving to species Latin binomials (Latinized two-part names: the first one indicating the genus, and the second one the species). It has also been applied to crops even though the latter are not the product of natural selection and therefore not species. In his talk, Simmonds singled out three crops to which the nomenclature system has been unkind: bananas, potatoes and sugarcane. He argued that the problems created by applying Latin binomials to these crops disappear when "Latin tags and formal rules are abandoned and informal genetically-based groups and cultivar names are adopted instead".

If Simmonds sounded confident, it’s because he had made the problems disappear for bananas. In 1955, he and his colleague Kenneth Shepherd had published a scoring method to classify edible bananas that had become an informal nomenclature system. But even though it proved more useful to scientists than Latin binomials, it did not eclipse the latter. 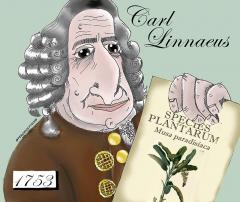 A handful of Latin binomials still regularly crop up in scientific papers on edible bananas. The best-known ones are Musa paradisiaca and Musa sapientum, coined by Linnaeus himself. Unlike the Latin binomials assigned to wild plants, which refer to individual species, these names do not hark back to any cultivar in particular. That was not originally the case. To their credit, Linnaeus and the botanists who came up with the hundreds of Latin binomials that were assigned to edible bananas over the years were trying to give unique names to different cultivars, except that they could not agree amongst themselves which characters to use to classify bananas. The reason only became apparent later, when edible bananas were shown to be the products of a complex history of domestication (see The domestication of bananas).

The muddied waters of Linnean names

Because it is the first Linnean name given to a banana, Musa paradisiaca is, according to the rules of the botanical code, the type species[4] for the genus Musa[5]. Linnaeus included it in the first edition of Species Plantarum, the 1753 publication that marks the boundary between Linnean and pre-Linnean names. His model was an edible banana growing in the glasshouse of a Dutch banker. It was famous for being the first banana to flower in Europe.

For the 10th edition of Systema Naturae, which came out in 1758, Linnaeus distinguished a second edible banana, which he knew only from drawings by George Ehret in Christoph Jacob Trew’s Planta selectea (plates 21, 22 and 23). He called it Musa sapientum.

The paradox is that Linnaeus did not consider cultivated plants to be species since they are the product of a process mediated by people. That’s why he usually described them as varieties of wild species, a practice for which he was later criticized because it dragged cultivated plants into the classification system for wild plants[6].

Evidently Linnaeus could not classify his banana models as varieties since he didn’t know from which species they derived. Whatever his reasons for describing these two cultivars, thereby elevating them to the rank of species, the problem is that it led to a disproportionate emphasis being put on cultivated bananas by the botanists who followed in his footsteps. One consequence is that for a long time the taxonomy of the genus was a confusing mess, especially since the application of Latin binomials to cultivars varied widely among botanists.

It didn't help that the European botanists handing out Latin names left and right were usually just passing through. As Frank Howes, a botanist at the Royal Botanic Gardens, Kew, commented after collecting wild and cultivated bananas in southeast Asia in the 1920s: "a botanical classification…can only be attempted by one who is resident for some time in one of these countries and is able carefully to observe the different varieties in their different stages of development".

That’s exactly what K. Cherian Jacob did for 15 years in the province of Madras in India. His conclusion, which he published in 1952, in Madras bananas, was that the traits supposedly characteristic of Musa paradisiaca were also found in typical Musa sapientum varieties. Hence his solution, which was to rename 64 cultivars as varieties of Musa sapidisiaca. Not that it matters anymore, but for reasons of priority the mash-up name should have been Musa paradientum.

Attempts were also made to squeeze wild species in a framework based on Musa paradisiaca and Musa sapientum. Because the latter produced seedless fruits, Musa sapientum subsp. seminifera and Musa paradisiaca subsp. seminifera were created for seedy bananas, to which varietal names were sometimes added to precisely identify a plant. As David Constantine, the compiler of an annotated list of Musa names, remarked about Musa paradisiaca subsp. seminifera var. hookeri: "A nomenclature system that gives to a seed-bearing diploid species (Musa sikkimensis Kurz) the status of a variety of a subspecies of a seedless triploid is obviously in trouble although, of course, this could be recognised only in hindsight."

Cutting through the fog

As far back as 1865, Wilhem S. Kurz—a German botanist who worked in India, Indonesia, Burma (now Myanmar) and Malaysia—had come to the conclusion that Linnaeus’s bananas were hybrids, and even suspected the identity of the two species involved. However, his work, cut short by his untimely death, was mostly ignored. It was not until the 1940s that Ernest E. Cheesman, a British botanist who had spent decades studying bananas—at the Imperial College of Tropical Agriculture in Trinidad and Tobago, and at the Royal Botanic Gardens, Kew, in England—made progress in sorting out the confusion. By ignoring the cultivars, he was able to tease out from the scientific literature some of the most important species in the genus Musa and give them modern definitions. Among his achievements are proper definitions of Musa acuminata and Musa balbisiana, which by then had been recognized to be involved, albeit not always together, in the domestication of most edible bananas.

Cheesman also criticized the practice of applying Musa paradisiaca to "plantains" and Musa sapientum to "bananas", based on the resemblance of Linnaeus’s bananas with, respectively, a Plantain cultivar and a dessert banana, most likely a Silk cultivar. He even researched the origin of opposing the words bananas and plantains because he wanted to break down the association with the Linnean names. The association, he wrote, "must be broken down before we can arrive at any approximately correct nomenclature for the cultivated bananas, and, as old and familiar usage should not be set aside without reasoned justification, the position may be made clearer by showing that the association arose quite accidentally in the first place and never had good authority behind it" (see The origin of the expression "bananas and plantains").

By 1947, the British botanist had become convinced that it was impossible to reconcile the wild and cultivated bananas within the Linnean nomenclature system. "The classification of the cultivated varieties", he wrote "is almost a separate problem from the taxonomy of the genus, needing a different technique for its solution, and confusion of the two makes both almost impossible".

Cheesman did not propose a strategy for attacking the problem of how to classify edible bananas. The solution came from his younger peers, Norman Simmonds and Kenneth Shepherd, who both worked on bananas at the Imperial College of Tropical Agriculture in Trinidad and Tobago in the 1950s. (Continued in part two)

1. When they are not pollinated, the flowers of non-parthenocarpic banana plants produce non-fleshy fruits containing non-viable seeds.
2. In many instances, it looks as if farmers played a role in bringing together bananas that under natural circumstances would probably not have crossed path and mated.
3. GWAS and the parthenocarpic banana, published 31 May 2016 in News & analysis
4. The species on which a genus is based and with which the genus name remains associated during any taxonomic revision.
5. Linnaeus did not come up with the name Musa. He simply accepted the name Georg Eberhard Rumphius had used in Herbarium Amboinense, a catalogue of the plants of Ambon Island in modern-day Indonesia, published posthumously in 1741.
6. It also encouraged the use of the word variety in relation to cultivated plants. Variety is a taxonomic rank below that of species and subspecies. The recommended word for crops is cultivar, short for cultivated variety.
7. The confusion is compounded by the fact that the word Plantain is the name of a specific type of cooking banana.
8. The word banana is believed to be of West African origin and introduced into European languages by Portuguese taking bananas from West Africa to the Caribbean. Another hypothesis is that the Portuguese picked up the word in India and brought it to West Africa.