With the field-testing of genetically modified (GM) bananas, Uganda takes another step towards developing its own transgenic crops. 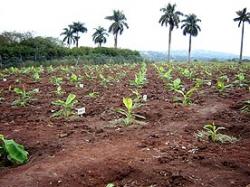 In Uganda, over 200 genetically modified Gros Michel banana plants are being field-tested for their resistance to Black leaf streak, a fungal disease that attacks the leaves and lowers yields by interfering with photosynthesis.


Although the plants were successfully transformed some time ago by Belgian and Ugandan scientists working at the Catholic University of Leuven (KULeuven) in Belgium, scientists had to wait patiently while appropriate biosafety procedures were developed by the Ugandan authorities and the regulatory infrastructure put in place. The trials were planted at the Kawanda Agricultural Research Institute (KARI) field station of the National Agricultural Research Organization (NARO) in Kampala in November 2007. They will end in about two years after the second generation of plants has been evaluated.

It is too early to say whether the chitinase genes from rice that have been introduced in the Gros Michel plants, known locally as Bogoya, have made them resistant to Black leaf streak. The results of the trials are important to show that the technology works, but the project has already achieved what it had set out to do, that is "transfer the technology to Ugandan scientists so that they can do the work themselves” says Rony Swennen, the head of KULeuven's Laboratory of Tropical Crop Improvement where the plants were modified.

The Ugandan Government had already gained a stake in developing this powerful technology, and adapting it to meet local and regional needs, with the inauguration in 2003 of the molecular biology laboratory where NARO scientists are working on a group of bananas critical to food security in the region, the East African highland bananas. Work is ongoing to make the most popular varieties resistant to the main pests and diseases driving down their yields through two complementary projects. The Ugandan government is funding a project coordinated by Bioversity International while USAID is financing the Agricultural Biotechnology Support Project II managed by Cornell University.

As the authors of a report by the International Food Policy Research Institute point out, genetic transformation is a promising strategy for Ugandan smallholder farmers, not only because biotic constraints are severe and not easily addressed through conventional breeding, but also because the local varieties are not exported on the world market, so that the risks of reduced exports due to policies against genetically modified foods are low.