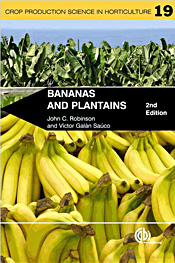 As a banana researcher, I have used John Robinson’s Bananas and Plantains book regularly since its publication in 1996. This second edition, co-authored with Victor Galán Saúco, is most welcome. It looks like I will be using it well into the future. This book should be on the shelves of everyone interested or working in banana and plantain production and marketing. It distills the main new knowledge gained in the last 15 years and integrates it with our previous knowledge of bananas (the second edition has 380 references, compared with 198 in the first one). A clear and concise writing style is maintained throughout the book, and I expect the new edition will have a much broader readership than the researchers and students mentioned on the back cover.


A difficulty in writing this type of book is what to include and what to leave out. This balance has been achieved to a high level and, for those interested in a deeper analysis, there are references to which the reader is directed. An exception is the work done in the last decade on the use of simulation models to evaluate environmental issues and production systems in bananas. Models are used in many farming systems and it seems bananas and plantains have yet to benefit from a wider use of this approach.

A major strength of this book is the use of experimental evidence and argument to support varied horticultural practices developed and used across many countries and environments. Concrete examples, including lists of advantages and disadvantages, are also provided to help readers evaluate the suitability of the practices for their own situation.

The structure is the same as in the first edition, except for the inclusion of a new chapter: Systems of cultivating bananas and product certifications. The new chapter provides insights into how the export industry (which represents about 15% of world production) has responded over the last two decades to production problems and the demands of its main markets: Europe and North America. The authors have done a good job of showing how the industry has adapted to the wishes and needs of consumers and how product certification has made the production process more transparent. With the world population expected to reach 9 billion by 2050, changes in production systems of banana and plantain will have to occur over the coming decades. The new chapter is a very useful addition in that respect.

A note to the publisher. On the inner cover of the book, the Library of Congress Cataloguing-in-Publication Data, which are meant to help those who catalogue books, describe the book as being about Bananas and… Plantago. Plantago is a genus of some 200 species of mainly small herbs whose common name is plantain. Not to be confused with the plantains in this book, which belong to the genus Musa.

David W. Turner is an Honorary Research Fellow at the School of Plant Biology at the University of Western Australia, Crawley, Australia.

Preview of the book is available from Google books.

The Spanish version is available here.