Loading...
Under the peel » A crash course in banana bioinformatics

The Global Musa Genomics Consortium was created in 2001 to bring together the expertise of specialists applying genomics tools to the banana. For the first ten years, members of the Consortium steadily built genomic resources and worked to get the banana genome sequenced. The long-awaited sequence was about to be released when Dr Yasmina Jaufeerally-Fakim, now the dean of Mauritius University’s Faculty of Agriculture, sent a message to the mailing list. As a member, she thought that the Consortium was “a great initiative for getting all researchers on board and for stimulating exchange of information”. She felt, however, that many of the researchers in the South were not actively participating in or benefiting from what was going on and that the Consortium could do more “to get scientists in the South more involved in Musa genomics and the potential applications for improvement”.

At the time, CIRAD and Bioversity International scientists were adapting open-source bioinformatics tools and developing new ones to cope with the growing volume of data generated by publicly-funded genomics projects. Some of these were eventually integrated into the Banana Genome Hub, specifically set up for the banana genome sequence, as described in a recent article. Training molecular biologists on how to use these tools seemed the natural next step and the best way to involve members from far afield.

That’s how Stephanie Bocs from CIRAD and I were tasked by the Consortium management committee to organize a training course on Musa bioinformatics under the guidance of Nicolas Roux, Chris Town and Angélique D’Hont. For this first initiative we opted for Montpellier in France. For one, it has an active community of bioinformaticians developing applications and providing training through the South Green Bioinformatics platform, from where many Musa bioinformatics tools are accessible along with the ones developed for some 30 other crops. Montpellier, which is where the Musa acuminata sequencing project started, also has several scientists working on Musa genomics. 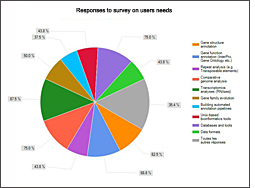 The first thing we did is a needs assessment by asking Consortium members interested in the training course to fill in an online survey. Turns out there were almost as many needs as there were potential trainees. Since we couldn’t cover everything in a week, we built the programme around 6 elements:

The training itself, which took place at the end of November, consisted of a mix of lectures (10 hours) and practical exercises (18 hours) over four days with a fifth day for discussions and wrap-up. Each day’s power point presentations and practical exercises were made available online. For the practical sessions there was one trainer for three trainees on average, a good ratio, especially considering that not all the participants came to the course with the same level of knowledge and experience. Nearly 80% of the 14 participants came from Asia, Africa and the Americas while the others were from Europe. A happy coincidence, since we were able to accept all the applicants, is that as many women as men attended the training course. 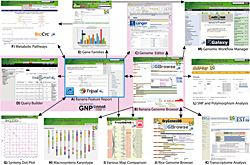 On the first day the participants were shown a diagram of the links between the different tools on the week’s programme. I could see faces starting to fall, so I immediately reassured them that it was normal to feel overwhelmed at this stage, but that by the end of the week they will be able to look at it without feeling intimidated. Sure enough they could.

The satisfaction survey helped confirm that the training had been beneficial. Some of the comments pointed to things that could be improved, such as more detailed handouts to be able to practice at home. Otherwise the participants gave high marks to the organization and quality of the course and commended the trainers for their knowledge and professionalism.  Even though the workshop is over, we continue to hear from the participants. Some have said they will share what they learned with their colleagues. Another offered to share data to the Banana Genome Hub, while others would like to start collaborations on topics of common interest. We also received invitations to give the training  in various locations.

The workshop would not have been possible without the financial support of the CGIAR Research Programme on Roots, Tubers and Bananas and the Agropolis Fondation's Flagship Programme, ARCAD. I would also like to thank the trainers who generously gave of their time and the Bioversity colleagues who greatly helped with logistical aspects. Finally, a special thank you to all the participants for making the training such a congenial and stimulating experience.