A taxonomic committee weighs in on the names Musa balbisiana and Musa velutina. 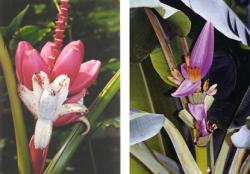 The rules of botanical nomenclature dictate that the first name used to describe a plant has priority over all later names. In two instances, however, Henry Väre and Markku Häkkinen from the Finnish Museum of Natural History proposed deferring to usage.

In the first of two notes published in Taxon, the journal of the International Association for Plant Taxonomy, the authors noted that even though Musa dasycarpa was described before Musa velutina, (left photo) the name dropped out of favour after the Kew botanist John Gilbert Baker treated it as a synonym in a 1893 paper, rather than as the legitimate name. To support their case for conserving the name M. velutina, the authors performed a Google search in which M. velutina racked up 16,500 hits, compared to 143 for M. dasycarpa.

In the second note, the authors proposed conserving the name Musa balbisiana after establishing that it is the same species as the previously described Musa rosacea. They argued that changing the name of this well-known species to M. rosacea would only create confusion given the checkered history of that name. They also pointed out that the name M. rosacea had often been erroneously given to plants that belong to a different species, Musa ornata (right photo).

The taxonomic committee reviewing the proposals voted unanimously to conserve Musa velutina. The Report of the Nomenclature Committee for Vascular Plants: 63 says: "Hairy bananas are rare, but one such species is well known from continental Asia under the appropriate name of Musa velutina. Musa dasycarpa was described from Assam in 1865, but no original specimens are known. The original description by Kurz was brief—merely “fruits hairy”—and probably the brevity has been responsible for the name having virtually never been taken up. It does, however, seem to qualify as a validating diagnosis. There is one other hairy banana species, but that is from Borneo. There seems to be no doubt that M. velutina and M. dasycarpa apply to the same species, and without conservation the latter should be taken up. Musa velutina is said to be very common in cultivation, and conservation as proposed seems desirable."

Regarding the second proposal, the committee voted to reject Musa rosacea instead of conserving Musa balbisiana. "Musa balbisiana is the name applied to a species of banana widespread from NE India and Sri Lanka to New Guinea. Musa rosacea can be identified from the illustration in the protologue, which has recently been chosen as its lectotype. The two names are considered by the proposers to refer to the same species, although M. rosacea is seedless and could be regarded as a polyploid or a hybrid as suggested by the monographer Cheesman in 1948. It is not clear how this can be determined from the 1804 illustration. If it were treated as a hybrid, it would apparently be M. ×rosacea and would not compete against M. balbisiana, so conservation would be unnecessary. Furthermore, we are told that the name M. rosacea has been almost universally misapplied since 1822 to what is correctly known as M. ornata Roxb., or has been ignored. But conservation as proposed would seem to allow it to be resurrected as an interspecific hybrid name in a sense in which it has never been used. Discussion in the Committee indicated that rejection of M. rosacea “utique” would be a better solution. This was suggested to the proposers, who agreed to this change in their proposal being made. It is now not recommended that M. balbisiana Colla be conserved, but that M. rosacea Jacq. be rejected under Art. 56 and included in Appendix V."