Once the mainstay of the export trade until Fusarium wilt made its cultivation in large-scale plantations impossible, Gros Michel has found a niche in Congolese man-made forests near the border with Angola. 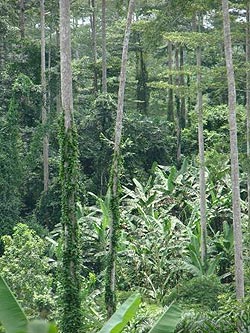 As far as consumers in banana-importing countries are concerned, Gros Michel may as well be extinct. Not only is it not, in the Luki Biosphere Reserve in south-west Democratic Republic of Congo it is grown in a low-input agro-forestry system that has been sustaining the rural and urban populations of Lower Congo for more than 50 years, according to a study conducted by the World Wide Fund for Nature (WWF) and the Central Africa Royal Museum in Belgium, in collaboration with researchers from the Institut national pour l'Etude et la Recherche Agronomiques (INERA).

In the 1940s and 50s, INERA’s predecessor, the Institut National pour l’Etude Agronomique du Congo belge (INEAC), and the Forest Service initiated the planting of Limba (Terminalia superba) in the area’s secondary forests. INEAC also signed contracts with commercial banana producers allowing them to plant bananas as long as these were interspaced with Limba trees. After clear-cutting the forest, the Belgian settlers planted Gros Michel bananas at intervals of 4 m by 4 m. When the banana plants reached two years of age, 1.5-meter-high Limba seedlings were introduced at intervals of 12 m by 8 m, or a density of 104 trees per hectare.

At the time, both the Limba, a timber species used in furniture making, and the Gros Michel bananas were exported to Europe. After Congo gained its independence, most banana plantations were abandoned, but because Gros Michel plants keep on producing even when they are neglected, local people were able to continue harvesting them. In time, however, Congolese sharecroppers picked up where the Belgian settlers left off, even introducing varieties of plantain in the mix. Because plantains are an important staple food, farmers can easily find buyers for them in the local markets and as far away as Kinshasa, where plantain consumption doubled since 1975.

In 2007, INERA staff surveyed 91 farmers and 51 banana sellers in villages located near the Luki Reserve. The majority of surveyed banana farmers cultivate less than 5 ha of land, for a total of 405 ha, over 60% of which are under tree cover. According to some farmers, banana plants cultivated under forest cover remain productive for 30 years or more (Gros Michel plants introduced by Belgian settlers more than 50 years ago are still being harvested) whereas the productivity of banana plants in open areas decreases markedly after 20 years.

Based on interviews conducted during the rainy season – which lasts 7 months – and the mean weight of Gros Michel and plantain bunches sampled in local markets, the annual production was estimated to be 4.8 to 6.3 t/ha for Gros Michel and 3.6 to 5.7 t/ha for plantains (yields during the dry season were estimated to be half of those of the rainy season). The results are comparable with numbers reported for Lower Congo in the 1980s, a time when banana farmers were using fertilisers. 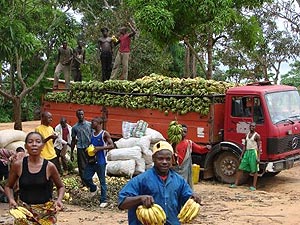 Plantains may be less productive than Gros Michel (their bunches are smaller and they produce less suckers) and they also need more care (the plants have a tendency to grow above soil level and topple over, a phenomenon known as high-mat), they are worth the extra effort since they fetch a better price. The researchers estimated annual gross revenues of 289 to 775 USD per hectare for Gros Michel and 565 to 1692 USD for plantains (prices increase by 30 to 40% during the dry season).

The success obtained in growing bananas and plantains under forest cover in and around the Luki Reserve confirms studies suggesting that bananas give their best yields under 50 percent cover. The narrow crown of the Limba trees and the spacing at which they are planted seem to provide this kind of favourable condition. Moreover, Limba trees lose their leaves during the dry season, a factor that likely contributes to the fertility of the soil and health of the microbial fauna.

Another plus is the relatively low pest pressure. The farmers reported the presence of weevils and the banana bunchy top virus, but in view of the susceptibility of Gros Michel to Fusarium wilt, the most striking result is that the banana plants appear free of the disease. At this point, it's not possible to say whether the absence of symptoms is due to the absence of the fungus in the soil or to the soil suppressing the pathogen Fusarium oxysporum f. sp. cubense. Suppressive soils, as these types of soils are called, are rare, but Rony Swennen, a banana specialist at the Katholieke Universiteit Leuven in Belgium thinks that the soil micro-fauna should be investigated.

The people who came up with the idea of planting Limba trees in the shade of banana plants did not imagine that 50 years later bananas would still be harvested. They believed that the banana plants would outlive their usefulness once the Limba trees were established, but their importance as a source of food and income has provided an incentive for farmers to keep bananas in the system. For how much longer, however, is another matter.

With much of the local forest gone, the authors argue that future reforestation schemes should consider planting bananas with Limba trees, but the demand for timber and charcoal might tip the balance in favour of trees. It would be unfortunate if, having just documented the benefits of this unique experiment, the pressure to grow trees in monocultures were to bring about its passing.

For more information or to obtain a copy of the WWF report, available only in French, contact Geert Lejeune