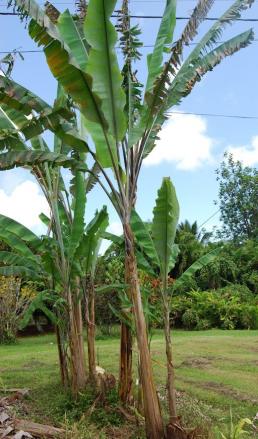 DH Pahang is short for 'doubled haploid Pahang'. The doubled haploid part refers to the doubling of the haploid genome of pollen to obtain an homozygous diploid, i.e. a plant in which both copies of each chromosome are identical. Pahang is the name given to an accession of Musa acuminata ssp. malaccensis collected in Malaysia's Pahang province when it was introduced to the Banana Board Jamaica genebank in the late 1940s. The name stuck as the accession was shared between genebanks.

Doubled haploid bananas were originally developed by CIRAD breeders1 .  They used anther culture to produce haploid plants whose chromosomes doubled spontaneously2 3 4 .  When scientists had to decide which banana genome to sequence first, they opted for DH Pahang5 . One of the reasons is that a homozygous genome is easier to sequence and assemble that a heterozygous one. Moreover, this particular subspecies of Musa acuminata had been shown to be at the origin of many banana cultivars, including the ones that are most important for food and economic security.

In the ITC collection, DH Pahang is known as CIRAD 930.

News on the sequencing of the Musa genome in InfoMus@