The banana may be the world’s favourite fruit, but the plant itself is also popular with hobbyists and landscapers. A banana plant will ‘add a lush tropical feel to any garden’, as nurseries like to say on their websites. Currently dominated by wild species and hybrids created for that purpose, the market for ornamental bananas will soon have a new player when Embrapa, the Brazilian agricultural research corporation, starts releasing its creations for use as landscape plants, potted plants, cut flowers and ornamental minifruits. 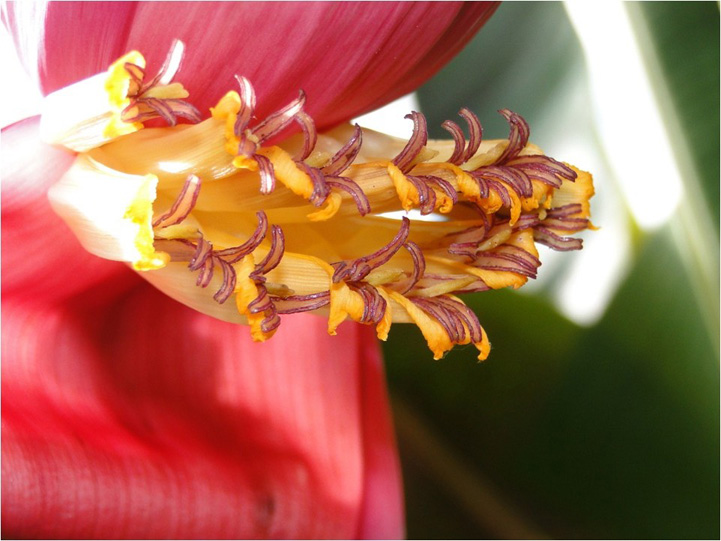 The male inflorescence is one of the banana plant’s most attractive features. Not surprisingly, the plants used for ornamental purposes share that characteristic. Species that belong to the section Rhodochlamys, such as Musa laterita, Musa velutina and Musa ornata, are especially appreciated because of their erect inflorescence and colourful fruit and bracts. (Photo Janay Santos-Serejo) 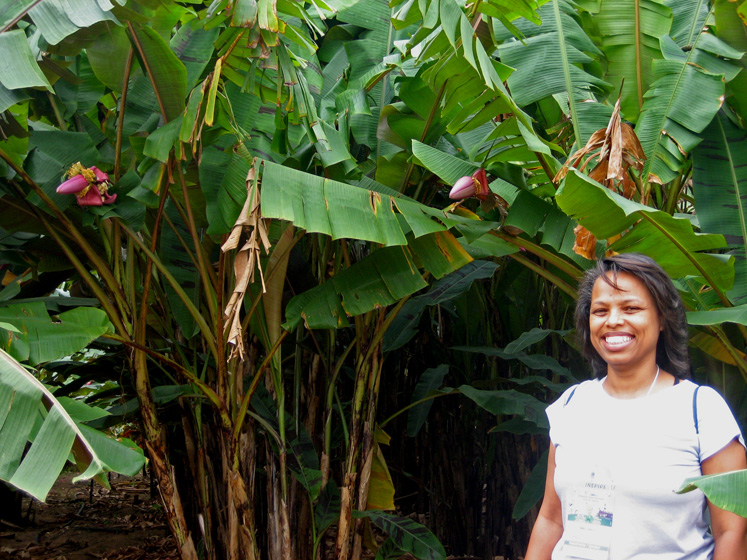 The popularity of bananas as ornamental plants did not go unnoticed by Embrapa, which already maintains for its breeders a collection of more than 250 accessions in Cruz das Almas, in the northeastern part of Brazil. Looking for new and innovative ways to expand the use of its collection, Embrapa started an ornamental breeding programme in 2003. The first task of Janay Santos-Serejo and her team was to select accessions that seemed promising based on traits such as the shape, size or colour of the male bud, hand, fruit, stalk, peduncle or leaf. (Photo Inge Van den Bergh) 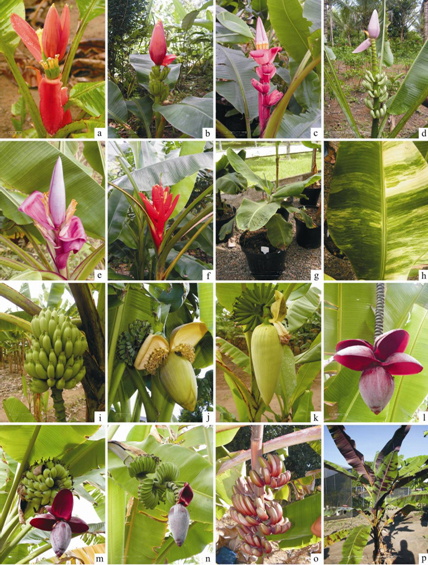 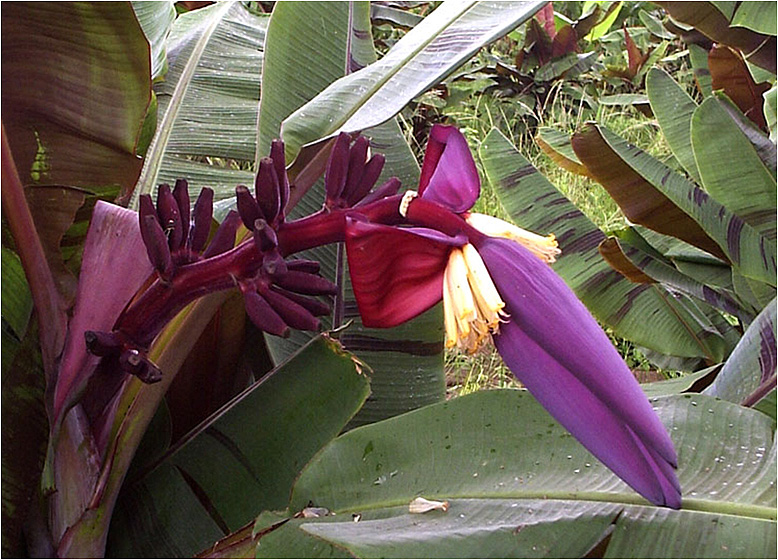 The promising accessions were characterized to help identify their potential for producing hybrids with the desired features, such as short stature, small fruits or colourful male inflorescence. For example, Monyet (M. acuminata ssp. zebrina) is valued for its capacity to produce hybrids with purple inflorescences and eye-catching variegated leaves. (Photo Janay Santos-Serejo) 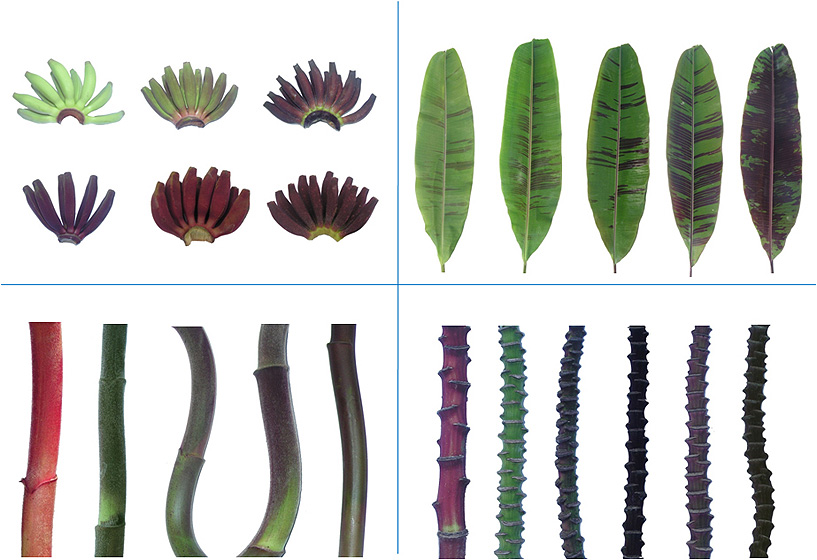 Some characters are more variable than others, as shown by the diversity observed in the progeny of a cross between Monyet and Royal with regards to the shape and colour of the fruit, leaves, peduncle and rachis. (Photos Everton Hilo Souza) 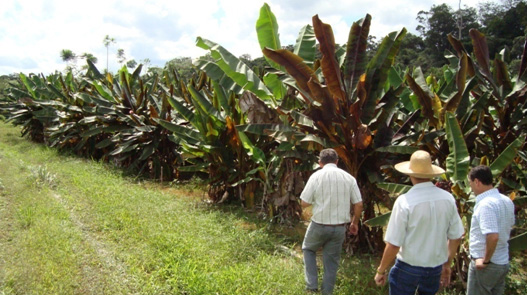 The hybrids were also bred to be resistant to diseases that attack the leaves. To verify their resistance, the hybrids were screened under field conditions. The evaluation against Sigatoka leaf spot (Yellow Sigatoka) was done at the Cruz das Almas station, but since the area is free of black leaf streak (black Sigatoka), the accessions were also screened in Manaus, in the Brazilian state of Amazonas. (Photo Janay Santos-Serejo) 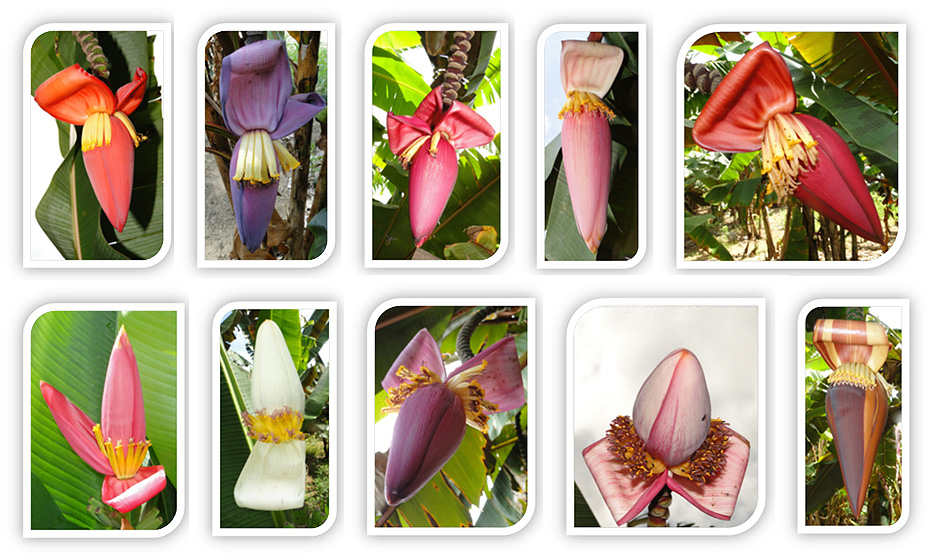 The hybrids were also evaluated for their appeal. In one series of tests, flower stalks were displayed individually in vases and people were asked to rate them. When the white inflorescence was among the contenders, it usually came out as the favourite. (Photos Janay Santos-Serejo) 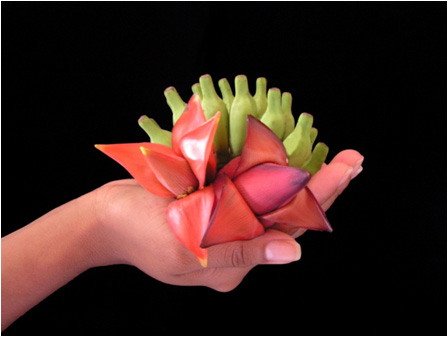 The market for ornamental plants is always on the lookout for novelties. The Embrapa team hopes that the minifruit they developed will strike a chord with the public. The selected minifruit had to meet several criteria regarding the colour, shape and size of the fruit (between 5 to 8 cm in length), as well as the spacing between the fruit and between the hands in the bunch. (Photo Fernanda Vidigal Souza) 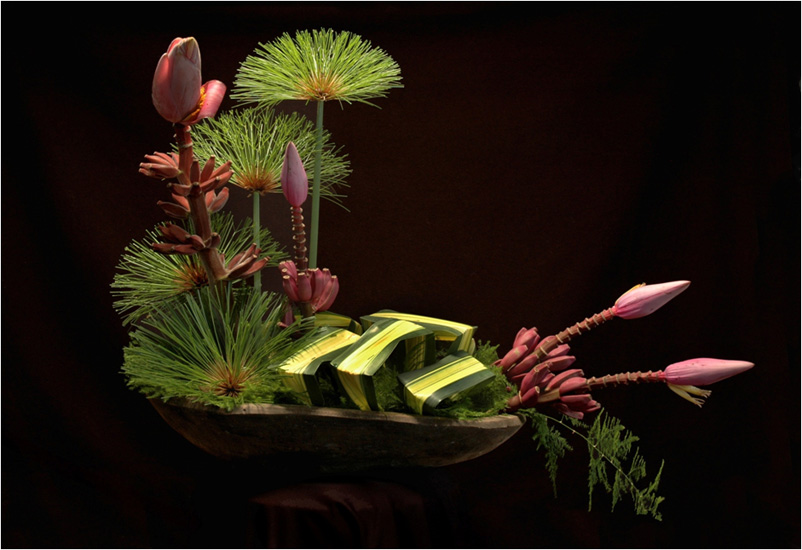 For use as cut flowers, the Embrapa team selected hybrids with arresting colours, an erect inflorescence, small fruit and a relatively long stalk (more than 20cm). (Photo Solange Reinhardth) 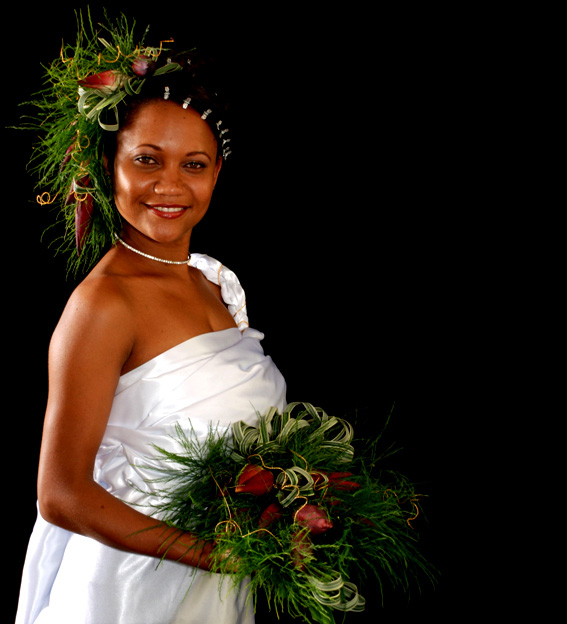 Embrapa plans to start licensing the right to grow its creations in 2012. If the market is receptive, farmers wanting to diversify their sources of income will be glad that Embrapa took the risk to innovate. (Photo Solange Reinhardth)