Growing organic bananas for export is a booming business in Peru. The value of the export trade has grown by leaps and bounds since 2000, from 264,000 to 50 million US dollars.

The main producing area is the Piura-Sullana region, where rain is scarce but irrigation water is plentiful… at least for the time being, cautions Andy Jarvis of the CGIAR Research Program on Climate Change, Agriculture and Food Security. 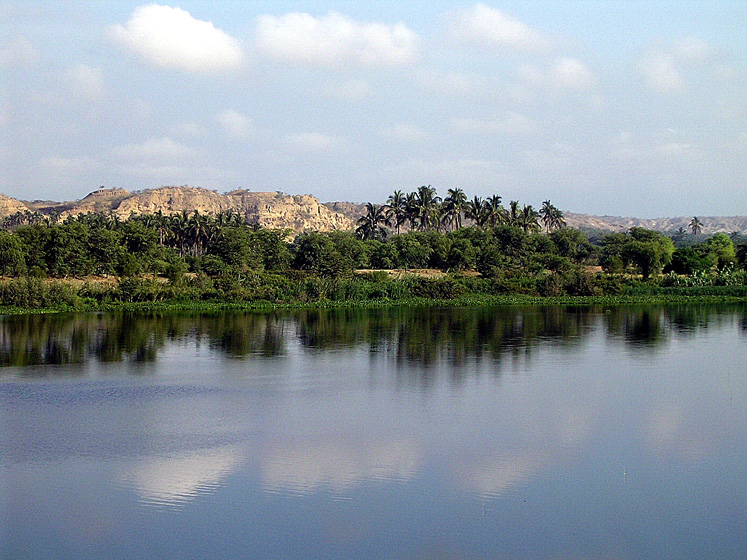 The Chira valley has been at the centre of efforts to rehabilitate the region’s banana fields devastated by the 1997-1998 El Niño. The initial plan to help farmers produce for the export market was replaced by a strategy to go for the smaller, but more open to newcomers, organic banana market. The dry climate of northern Peru proved to be a blessing in so far as farmers don’t have to worry about black leaf streak, the fungal disease whose management exacts a high cost in humid regions. But the main asset that makes the cultivation of bananas possible is the river. (Photo Anne Vézina) 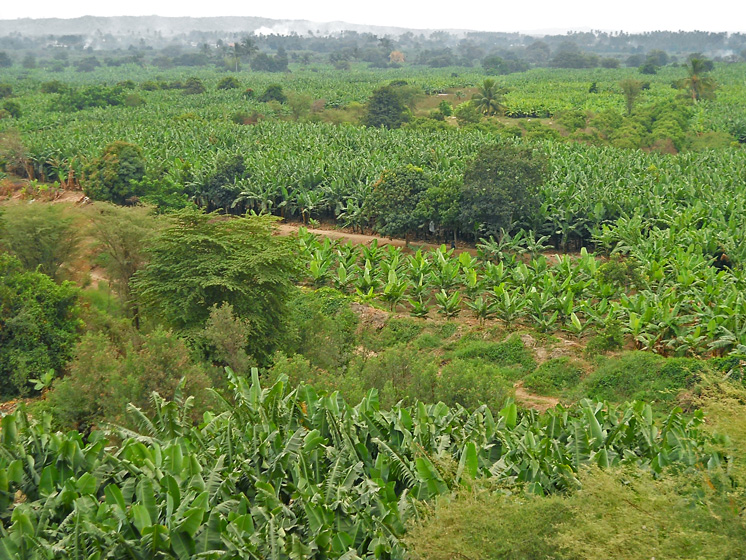 Most organic bananas are grown on plots that average less than one hectare in size. Generally speaking, smallholders are considered ideally suited for the organic niche market since they can rarely afford the chemical pesticides and fertilizers that are banned in organic agriculture. The recurring cost of certification, however, is beyond the reach of the average smallholder. Producers overcome this by forming associations that spread the cost among their members or by signing an exclusivity contract with a marketing company that, in return for paying for the certification, buys their production at a fixed price. (Photo Miguel Dita) 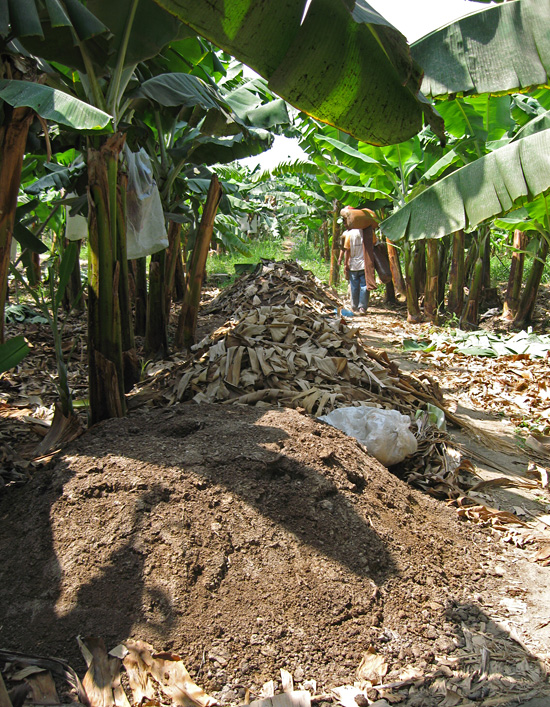 Fertilization is one of the main costs for producers of organic bananas. Buying manure and permitted organic fertilizers (such as bird guano and SuPoMag, a naturally occurring mineral containing sulfur, potassium and magnesium) may represent as much as 40% of a producer’s annual total costs. (Photo Charles Staver) 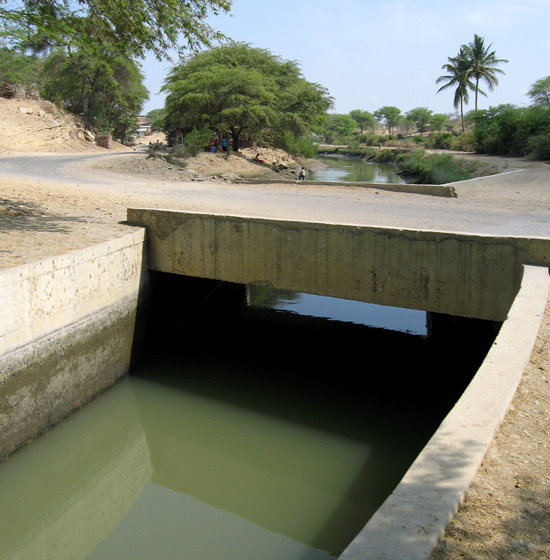 Irrigation canals have been built to bring the water from the Chira river to the fields where bananas are cultivated. Sugar, cotton and rice used to be the main crops grown on the northern coast of Peru, but agriculture has since diversified to include other high-value export crops such as limes, mangos and grapes. (Photo Charles Staver) 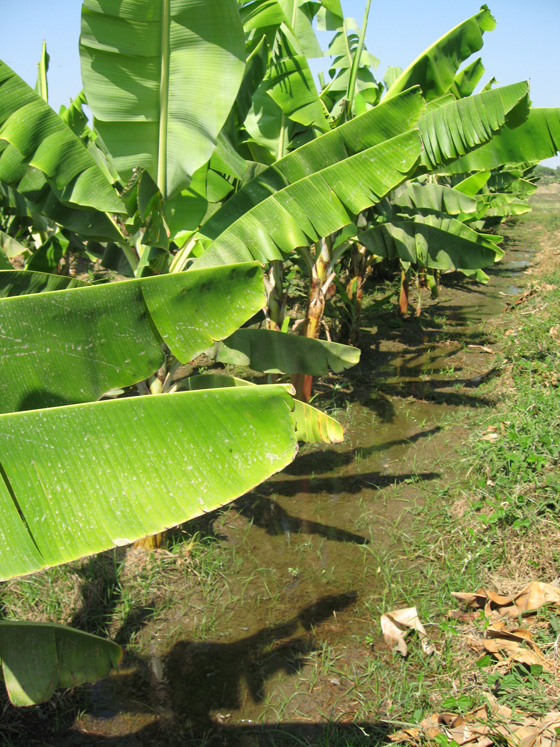 The fields are flooded every two to three weeks, depending on the availability of water in the irrigation system. However, this interval is too long for efficient plant growth since the soil goes from one extreme to another, from being saturated with water to suffering from a lack of water before the field is irrigated again. Moreover, the plant residues, required by the various organic certification systems, are not properly moistened and as a result do not decompose well. (Photo Charles Staver)

Climate change models of the Piura region do not predict any significant increase in rainfall, from the current 60 mm a year. But what could make the current irrigation scheme unsustainable is if climate change causes the glaciers to melt and results in less rain falling in the mountains, thus reducing the volume of water flowing down from the Andes. A better understanding of the hydrology of the drainage basin would help put in place irrigation practices that could offset lower river levels. (Graph courtesy of Andy Jarvis) 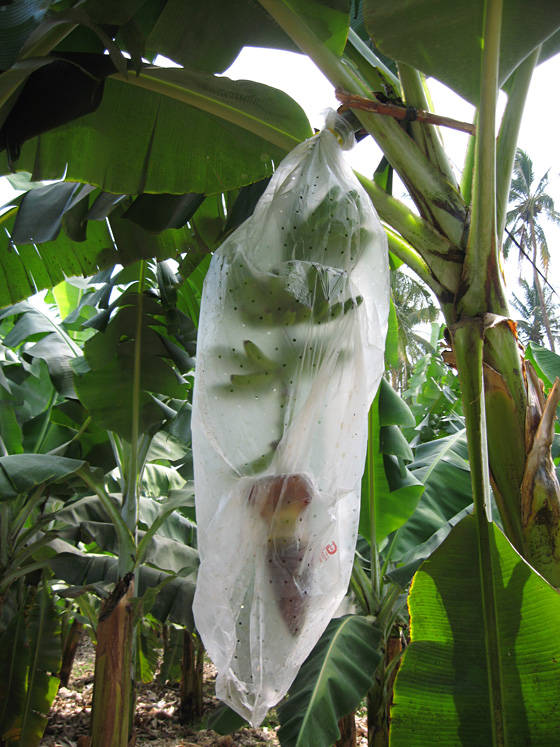 The growing bunch is bagged to protect it against insect damage and sunburn, but the cover also creates a microclimate that accelerates fruit development. The bags are collected to avoid contaminating the environment. (Photo Charles Staver) 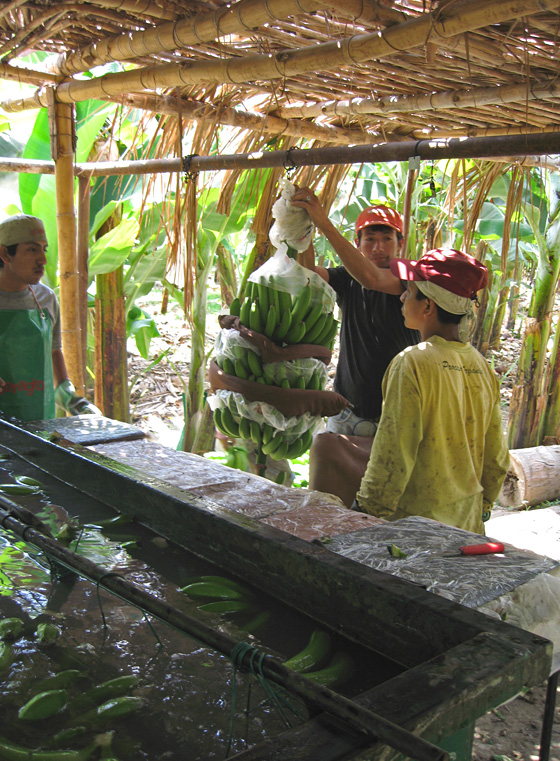 The bunches are then harvested and brought to a station where they are carved up and the hands washed to leach the latex. (Photo Charles Staver) 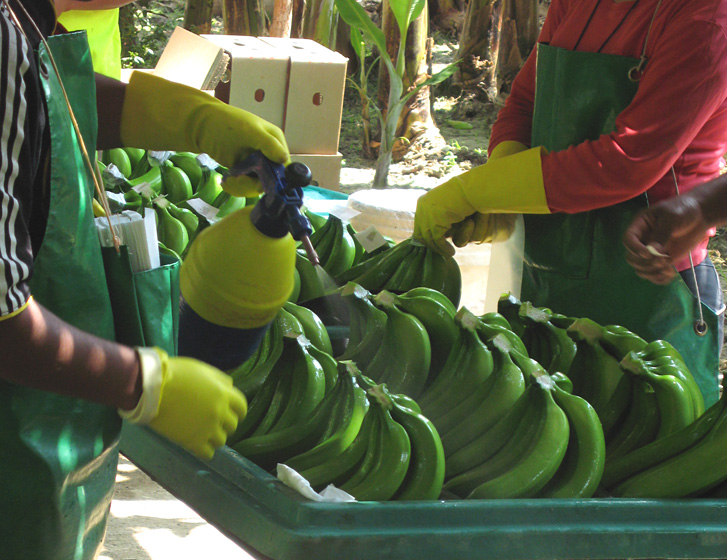 The fruit are sprayed with citric acid, the only substance allowed by organic certification schemes, to control crown rot, a common post-harvest disease. (Photo Charles Staver) 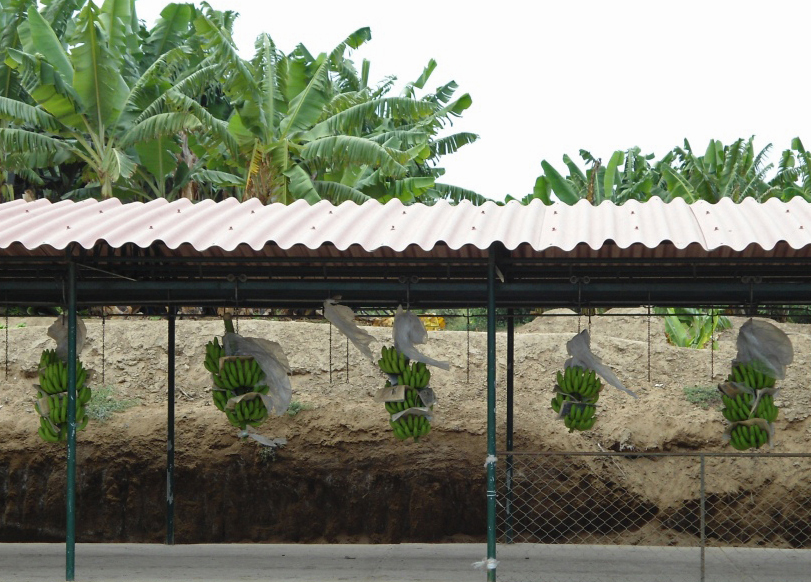 In certain places, cableways are one of the signs of the region’s recent prosperity. Farmers bring the bananas to the cableway, hook them on and watch them roll away to be washed, graded and packed into boxes. (Photo David Brown) 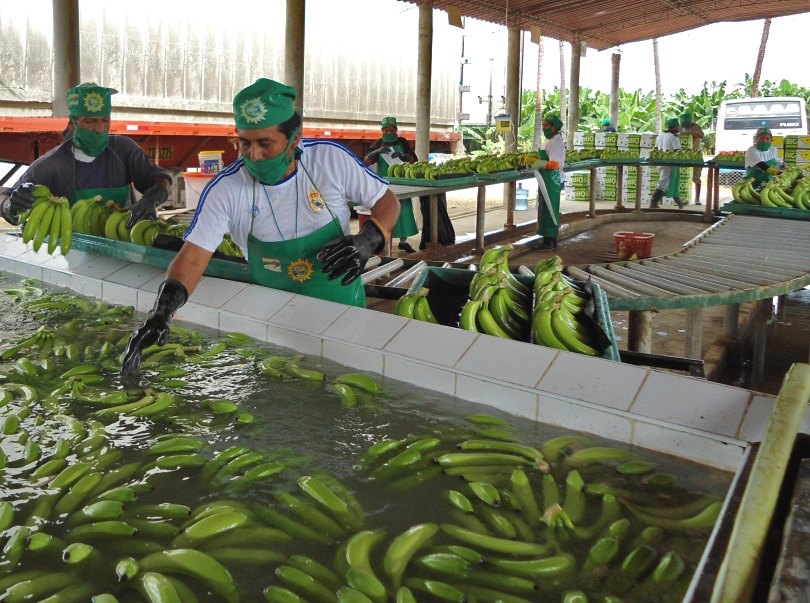 Investments have also been made in modern packing stations, from where the bananas are transported by truck to the port of Paita, some 60 km away. (Photo David Brown) 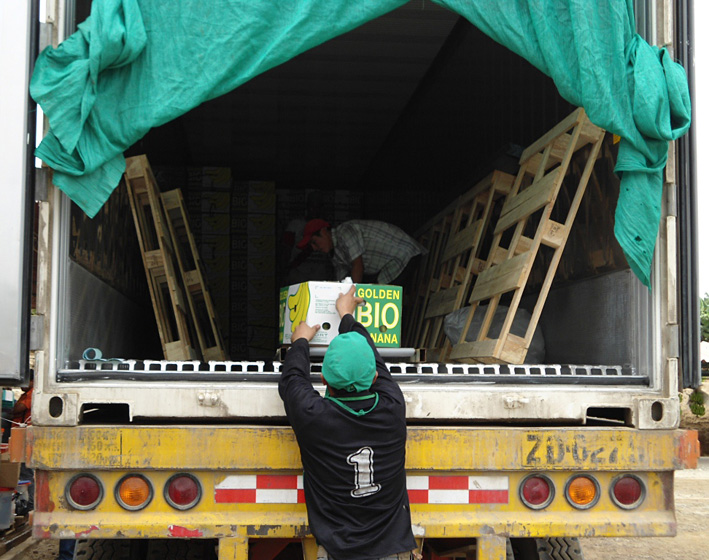 Half of the organic bananas produced in Peru end up in the Netherlands. The other half is sent to various countries, including the United States, Japan, Belgium and Germany. Unlike the bananas that stay in the country, the ones sold for export are put in boxes to protect them during the long journey ahead. (Photo David Brown) 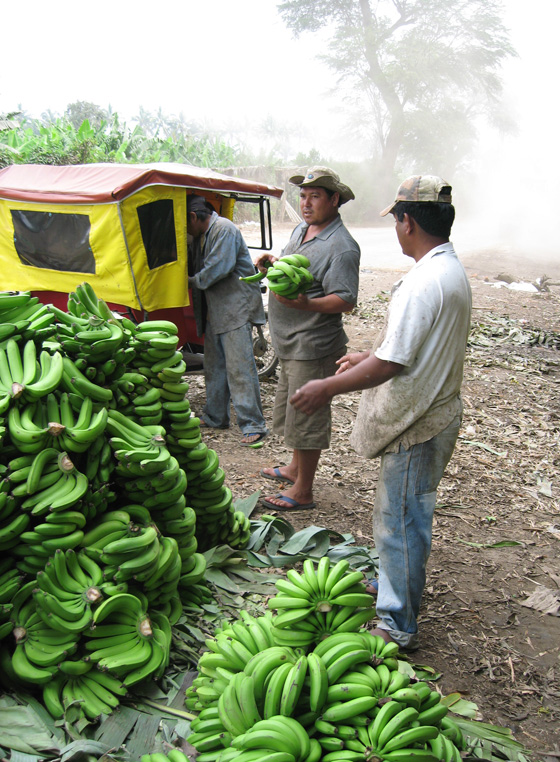 The organic bananas that do not meet export standards are sold in the local market. The lower price they fetch reflects the lack of demand for organic bananas in Peru itself. (Photo Charles Staver)