On February 4th, the ProMusa community lost one of its long-standing members, Jacky Ganry. 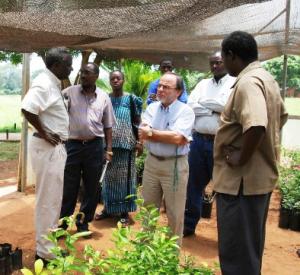 Jacky’s involvement in bananas goes back to his student days when he did his PhD thesis on the effect of temperature and sunlight on banana yield in Guadeloupe. He stayed on to work as an ecophysiologist at the Institut de recherches sur les fruits et agrumes (IRFA), one of the 9 institutes that in 1984 formed the first departments of the Centre de coopération internationale en recherche agronomique pour le développement (CIRAD), where he and his team made significant contributions to the integrated management of leaf spot diseases, the development of early-warning systems and other technological innovations that are still being used today. From 1983 to 1992, he headed CIRAD’s banana and plantain program from its base in Montpellier, France.

During this period he also played an active role in the creation of the International Network for the Improvement of Banana and Plantain (INIBAP, now part of Bioversity International) and was instrumental in convincing stakeholders that it should be based in Montpellier. An early believer in the benefits of networking for the global community, he will be remembered for the many technical and scientific partnerships he helped set up throughout his career. He was also one of the pioneers behind the creation of the Centre Africain de recherche sur la banane et plantain (CARBAP).

In 1993, he took over the scientific coordination of CIRAD’s Fruit and Horticultural Crops department (FLHOR), strengthening the department’s scientific expertise. Throughout his career, Jacky was an enthusiastic supporter of horticulture and the value of fruits and vegetables for human health. For many years, he led the Section on Tropical and Subtropical Fruits of the International Society of Horticultural Science (ISHS), and he was one of the pioneers of the Global Horticulture Initiative (GlobalHort).

Jacky published an impressive number of papers that still serve as a reference for many working in banana research. At the end of the 1990s, he became the scientific director of the international peer-reviewed journal Fruits.

His last assignment was at the Secretariat of the Global Forum on Agricultural Research (GFAR) in Rome. He was also one of the architects of the first GCARD meeting held in Montpellier in March 2010.

His colleagues describe him as open, attentive, dedicated and rigorous. The banana community has lost a respected scientist and a dear friend to many of us.