Loading...
Under the peel » Slippery uses of banana statistics

If a prize was awarded to the most popular opening line of scientific articles on bananas, it would have to go to “banana and plantain (Musa spp.) are the world’s fourth most important food crop after rice, wheat and maize”.  I get slightly annoyed every time I see it. Firstly, it’s not clear how the claim can be verified given that it doesn’t say what was measured. Is it the number of tonnes produced? Production value in constant dollars? Consumption? Since the statement is usually not referenced, your guess is as good as mine.

The other problem with that statement is "banana and plantain", as if Plantains were not bananas. It's like saying Europeans and Italians, or Africans and Ugandans. The banana vs plantain dichotomy perpetuates the misconception that banana refers to dessert bananas only, and plantain to all cooking bananas, a distinction that doesn't exist in countries where the banana is native and that arose in English, according to the British botanist Ernest E. Cheesman. But since the FAOSTAT website – the go-to place for statistics on agricultural crops – keeps separate tabs on bananas and plantains, I had to take them both into account to verify the mythical fourth place ranking.

FAOSTAT used to have a section ranking the  top 50 commodities according to their production in tonnes and their production value in constant dollars. Depending on the indicator and the year, bananas usually ended up somewhere between the 8th and 10th position after discarding animal products and non-food crop commodities (adding plantains didn’t change the ranking).

If instead of including all the countries, only the least developed ones were considered, adding the values for plantains and bananas moved the duo up to fourth place, behind rice, cassava (instead of wheat) and maize. As far as I know, this is the only metric supporting a fourth place ranking for bananas and plantains, at least as long as the large plantain producers do not graduate to the next category in the classification of countries (in least developed countries, plantains out produce bananas by 50%). 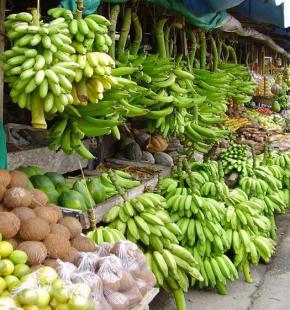 Maybe it's time to rethink the practice of opposing plantains to bananas. For one, it only makes sense if the meaning of ‘banana’ is restricted to dessert bananas and the meaning of ‘plantain’ extended to all cooking bananas. There are indications that this is what the FAO is doing. In Uganda, for example, most of the production compiled under plantains actually comes from East African highland bananas (EAHB), a large group of cooking bananas unique to the region. But comparing the FAO stats with the ones curated by CIRAD scientist Thierry Lescot suggests that a significant proportion of cooking bananas end up in the banana category.

Lescot uses as a starting point the FAO stats, which he fine-tunes using national reports and statistics, and expert knowledge. This allows him to break down the data into four categories (two for cooking bananas and two for dessert bananas):

According to the CIRAD statistics for 20101 , cooking bananas represent some 43% of total production (and the ‘true’ Plantains 15%), compared to 26% for the FAO plantain category of the same year.

The FAO is apparently looking into revising the categories it uses for bananas to make them more representative of the crop’s diversity, except that as long as the current labels remain unchanged, people who are not aware of the existence of the plantain category will continue to underestimate the total production of bananas when using the FAO statistics. This could be easily fixed by listing them next to each other as ‘Bananas, dessert’ and ‘Bananas, cooking’, for example.

In the meantime, if you also care about the diversity of bananas, you can join the community effort to document it on the cultivar diversity portal.
1 The CIRAD stats are published in the Fruitrop magazine.
Related content