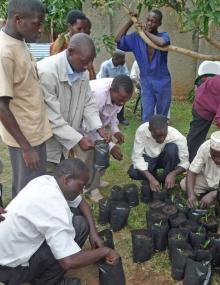 Learning how to handle tissue-culture plantlets. Photo by Thomas Dubois.
To encourage farmers to switch to tissue-culture plantlets, development projects typically distribute large quantities of plantlets at subsidized prices. The problem with this type of strategy is that the supply chain set up during the project usually collapses when donor support ends. Instead of going down that road, an (IITA)-coordinated project – implemented in collaboration with Volunteer Efforts for Development Concern and Jomo Kenyatta University of Agriculture and Technology, and funded by Germany’s international cooperation agency (GIZ) – took farmers and prospective nursery operators through the technical aspects of taking care of tissue-culture plantlets, as well as the basics of business planning, record keeping and marketing.

“The reason we covered these topics in the trainings is because, in our experience, showing farmers and nursery operators how to handle tissue-culture plantlets is not enough,” says IITA’s Thomas Dubois, one of the co-authors of the manuals. “The technology needs to be introduced as part of a complete package. Nursery operators obviously need business and marketing skills to turn a profit, but farmers also need them to fully benefit from the potentially higher yields and more predictable harvesting times that come with using tissue-culture plantlets.” Dubois also likes to point out that none of the trainees who subsequently set up a nursery or planted their fields with tissue-culture plantlets received subsidies.

As a result of the trainings, 11 nurseries were established or strengthened in Uganda and Kenya. Since then, a cost-benefit analysis conducted on three of the Ugandan nurseries has shown that they are making a profit of at least 0.25 USD on each plant sold. Other trainees have also become entrepreneurs. For example, a women farmer group in Mukono, Uganda, built a nursery that is now central to the supply of plantlets in the area. The women also used their newly acquired skills to access credit and start a catering business, while a fisherman hung up his nets to become a commercial banana farmer. He buys his tissue-culture plantlets from a neighbouring nursery set up by another trainee.

The training manuals are not intended for farmers or nursery operators, but are meant to be used by extension workers or applied scientists. The manuals are organized into modules divided into sessions reprising the actual training sessions. Most sessions follow a similar pattern. They start with the time frame and the list of supplies that will be needed, followed by the various activities and the content to be covered. Each session concludes with a Q&amp;A based on questions posed during the trainings. The various forms trainers will need during the trainings are also provided. A module can take as little as three hours to complete or as long as five months. The entire training course takes about a year and a half.

The editors and reviewers of the trainer’s manuals wondered whether the titles should mention banana and tissue culture since only part of the content was about either. The titles stayed. Hopefully they will not stop anyone working with non-banana farmers or nursery operators from using the manuals for the sections on marketing, business skills and organizing farmer groups.