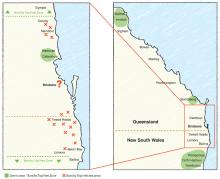 BBTV zone on each side of the border between New South Wales and Queensland.

In the 100 years since the Banana bunchy top virus (BBTV) arrived in Australia, the control measures put in place have been remarkably effective in preventing the virus from following its host to northern Queensland, where more than 90% of the country’s bananas are currently grown. With fewer plantations left in the bunchy top zone further south, and a greater distance between them, the prospects for eradicating the disease from commercial plantations have never been better according to David Peasley, the manager of the National Bunchy Top Project. “We have got the disease under control in commercial plantations”, says Peasley. ”The problem is that they are getting infections from banana plants in private gardens and hobby farms. To eradicate bunchy top from Australia, we also need to control it in people’s backyards.”

Bunchy top was first reported in Australia in 1913 in the Tweed River area of New South Wales, near the border with Queensland. It seems that the virus had arrived in suckers imported the year before from Fiji, where the disease had been present since at least 1889. As virologist James Dale later noted: “This supposedly single introduction began a saga unequalled in the history of plant pathology in Australia”.

At the time, the high price paid for bananas was driving a rapid expansion of banana-growing areas that in turn was increasing the demand for planting material and with it, the involuntary and mostly unrecognized spread of bunchy top. At first, farmers thought they were dealing with some kind of weather-related plant malformation. In those early years the disorder was known as ‘Cabbage Top’ or ‘Curly Top’. As it spread southward into New South Wales and northward into Queensland, nearly wiping out the industry, it became apparent that the problem was far more serious than originally thought.

In 1924, the State governments of New South Wales and Queensland created the Bunchy Top Investigation Committee to conduct research on the disease. The scientists were set up with a laboratory, a glasshouse and experimental plots near the epicentre of the outbreak. By 1927, plant pathologist Charles Magee had demonstrated that the causal agent was a virus, that it was transmitted by the banana aphid and infected planting material, and that it damaged the phloem region of the vascular system. A remarkable feat considering how little was known about plant viruses at the time. The virus itself was not isolated until the late 1980s.

Based on the results of his investigations, Magee put forward recommendations to prevent the introduction of the disease to BBTV-free areas and to rehabilitate infected areas. The basic tenets include registration of all banana plantations; establishment of quarantine zones; restrictions on the movement of planting material; regular inspection of banana plantations; prompt destruction of infected mats (the rhizome and its attached suckers); replanting with BBTV-free planting material; and extension programmes to disseminate information about the disease and its control.

Eradicating the virus in commercial plantations

How to recognize and control bunchy top, a video produced by the National Bunchy Top Project.

The recommendations were quickly implemented. In New South Wales, they led to a 6-fold increase in the area under bananas between 1928 and 1934. By 1935, however, the number and severity of outbreaks was on the rise again. For one thing, the inspectors hired to enforce regulations could not keep up with the rapid expansion of the area under bananas. Then the law of supply and demand kicked in and the prices paid for bananas fell, forcing many farmers to abandon their plantations. By then it had also become evident that most farmers were unable to recognize the early symptoms of a bunchy top infection.

To remedy the situation, the control campaign was reorganized as a collaborative effort between the industry, which funded the hiring of inspectors through a voluntary levy on production, and the Department of Agriculture, which hired and trained them. From that point on, the number of infected plants declined rapidly and eventually stabilized at a low level.

Infection levels also declined in Queensland, where a buffer zone was established north of the BBTV zone to protect the production areas of northern Queensland. The movement of banana material to any part of the state north of that buffer zone was strictly prohibited. The only time the isolation of the north was breached is in 1954, when the virus was spotted in Innisfail and promptly eradicated.

Both States also came close to eradicating the disease from the BBTV zone when the 5-year Banana Plant Health Improvement Project further reduced infection levels. Peasley believes that had the project not been stopped in 1998, they would have extirpated the virus. Instead, success was once again followed by a resurgence of the disease, particularly in southeast Queensland, where cutbacks dramatically reduced the number of inspectors dedicated to bunchy top.

The introduction in 2007 of a compulsory levy provided the impetus for taking another, and hopefully final, stab at the disease. Funded by Horticulture Australia, using the national banana levy and matched funds from the Australian Government, the National Bunchy Top Project is managed by the Australian Banana Growers’ Council. Phase 1 of the proposed 10-year time frame to eradicate bunchy top from Australia was launched in July 2009.

To give the project every chance of success, a six-person Bunchy Top team authorized to operate in both New South Wales and Queensland was set up and the frequency of inspections in the BBTV zone was stepped up. Even the disease-free plantations (no bunchy top ever recorded) get an annual visit. The provisionally free plantations (no bunchy top in the previous 2 years) and those that had only one case in the previous 12 months are inspected 2 to 3 times a year. The high-risk plantations, those that had more than one case in the previous year, are inspected between 9 to 10 times a year, including every 4 weeks during the summer growing season.

Four weeks is the time it takes in the summer for a plant to produce four leaves, which more or less corresponds to the disease incubation period. Experiments had previously shown that the first symptoms usually appear at the earliest in the second leaf to emerge after a plant has become infected. It then takes a further 1-2 days for an aphid to acquire enough virus from a symptomatic leaf to efficiently transmit the virus to a new plant. Based on data gathered during actual epidemics, the disease incubation period was calculated as the time taken to produce 3.7 new leaves, which is longer in winter (one leaf a month) than in summer (one leaf a week). Destroying an infected plant within this four-leaf period almost guarantees that aphids will not have had time to transmit the virus to other plants.

Each inspector was also handed a PDA (personal digital assistant) to record the location of the infected plants, along with other details that are then used to adjust the inspection schedule. In New South Wales, at the end of 2012, there were 229 plantations totalling 772 hectares in the BBTV zone. The new regime of inspections has translated to a 70% reduction in the number of high-risk plantations, while the number of BBTV-free plantations increased by 64%. The greatest impact is expected to come from completely destroying the remaining few ‘hot spot’ plantations (chronically high infection rates), which account for 63% of infections.

Clamping down on infected backyard bananas 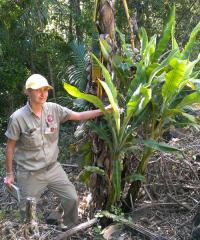 In southeast Queensland, where there are only 39 commercial plantations totalling 107 hectares in the BBTV zone, the main difficulty  will be to eradicate the virus from the area’s estimated 800,000 backyard gardens and hobby farms. Just finding out which ones have banana plants, let alone infected ones, is a challenge in itself. In residential areas, inspectors traditionally look over fences for the presence of banana plants and then ask their owners for the permission to check them. To facilitate this part of the work, the project is investigating remote sensing technologies that take advantage of the spectral reflectance signature of banana leaves to distinguish them amongst the vegetation. The location of the banana plants would then be matched with their owners’ name and contact details using local cadastral maps. The project inspectors would then only need to phone them up to arrange an inspection. Remote sensing technologies are also expected to make it easier to locate remote ‘feral’ banana plants (garden escapees), which are destroyed regardless of whether they are infected or not.

The project realizes that bunchy top cannot be eradicated from high population areas without the support of the general public, which is why it is also investing in a comprehensive communication campaign. Many owners of banana plants are not even familiar with the distinctive bunched leaves of an advanced infection after which the disease is named, which are often attributed to a nutritional deficiency of some sort. Many are also unaware of the risk of spreading the virus when they swap banana plants with their neighbours. The campaign is also trying to dispel some entrenched myths, like the belief that Lady Finger (the local name of a Pome cultivar) do not get bunchy top. The misconception apparently stems from a recommendation to plant Lady Finger instead of Cavendish bananas because the cultivar is less attractive to aphids and taller, making it easier for inspectors to spot banana plants growing behind fences. Australians are also being educated on the latest methods to destroy infected plants. In the 1980s, the plants were doused with kerosene and chopped up, until it was realized that the practice contributes to the dispersal of aphids as they flee for cover. The recommended method is to inject directly into the plant an herbicide to destroy it and a systemic insecticide to kill the aphids. 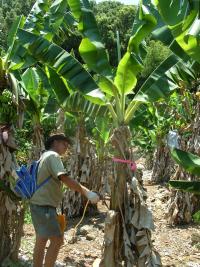 Inspector Grant East injecting into an infected plant a cocktail that is lethal to both the plant and aphids. Photo by David Peasley. Click on photo to enlarge.

Despite the knowledge and experience acquired over a century of coexisting with bunchy top, some questions remain unresolved. For example, field inspectors have noticed bunchy top symptoms on plants growing next to the site of an infected plant that had been destroyed 6 months to 2 years before. It seems to happen frequently enough to raise the possibility of a dormancy period. John Thomas, a virologist at the University of Queensland, is testing the possibility that the virus might be hiding in one of the eyes (growing tips) of the rhizome.  As he explains, “aphids prefer feeding on young leaves or at the base of the plant but it’s possible that some of them feed on the rhizome. It’s probably a rare event, but if it happens, it’s possible that the virus remains in the rhizome and that the disease only develops when the particular meristem the virus is in starts growing”. Thomas and his colleagues are inoculating healthy rhizomes to see whether disease symptoms are suppressed.

Thomas is also testing how long it takes for the systemic insecticide to reach the parts of the plants on which the aphids are feeding. “In the lab, we are feeding aphids on leaves from plants that have been injected with a herbicide and an insecticide. The aphids should die but the dose in the leaf doesn’t always readily kill them and the plants may also not die as quickly as expected from the herbicide.” Thomas thinks that it may sometime explain why some plants develop bunchy top 6 months after a neighbouring plant has been destroyed.

Meanwhile, an analysis conducted in 2012 by David Cook, an economist at the University of Western Australia, has put a value on preventing the spread of bunchy top to the major production areas of northern Queensland. The study estimates that the banana industry is saving between 16-27 million AUD (17-28 million USD) in annual losses. In other words, the industry could spend much more than it currently does on its campaign to eradicate bunchy top and still get its money’s worth.

Blogs on bunchy top in Australia