Loading...
Under the peel » The Future of Authentic Fair Trade Bananas

Last week I participated in a discussion on what Fair Trade means for bananas. The meeting was organized by the worker-owned co-operative Equal Exchange and held at the Tufts School of Nutrition in downtown Boston, USA. The event started with a screening of Bananaland, Blood, Bullets and Poison. The movie set the scene and provided plenty of food for thought, even though it’s a bit far-fetched to attribute all the social problems and the violent history of Colombia to the banana industry alone. Nevertheless, it is clear that the banana has a troubled history, and in spite of efforts to address some issues, many remain.

It was followed by Dan Koeppel, the author of Bananas: The Fate of the Fruit that Changed the World, highlighting how the banana was always meant to compete with apples and other local fruit by being sold at half their price. This very low pricing persists to this day, especially in UK supermarkets. The latter insist that the retail price does not have implications for the price paid to farmers and plantation operators, but it is clear that only by moving away from the industrial monoculture type of production, and factory-type of packing and logistics, can a real and fundamental turn towards sustainable production be achieved. That is possible, but not at a price half of that of apples.

Another heavily discussed topic was the difference between Fair Trade and ‘authentic’ Fair Trade. The issue is not new and recently ‘reached a boiling point’ when Fair Trade USA broke away from the international Fairtrade movement after it opted to allow coffee – traditionally a smallholder crop – from large-scale plantations to be certified as Fairtrade. There is a justified fear that opening up the system to large-scale plantations is at odds with the basic philosophy of Fair Trade. For bananas, however, the ‘authentic Fair Trade’ discussion has something of a rearguard battle feel to it. Restricting Fair Trade to small-scale banana producers does not match the structure of the industry (it’s estimated that 90% of export bananas are produced on farms larger than 50 hectares), nor does it do justice to Fair Trade’s original mission: improving the social situation of both banana plantation workers and smallholders.

Then there is the issue of organic farming. The grassroots movement of cooperative food stores, worker cooperatives and other alternative economic organizations put strong belief in the principles of organic agriculture. It struck me that the feeling in the USA seems to be that organic products cannot be trusted if they are brought to consumers by large corporations. The same perception that Fair Trade has fallen victim to corporations seems to exist, to the point that both certification schemes are often perceived as mere marketing tools. The most trusted providers seem to be the companies whose identity and mission are moulded on the fair and organic principles, and select products and producers based on their own values and convictions. Companies like Equal Exchange, for whom authentic Fair Trade and organic are at the heart of everything they do. The question of how this approach can be mainstreamed is probably a wrong one. The authentic Fair Trade movement does not want to mainstream Fair Trade. It wants to downscale it and make the business more local, with local production and alternative, cooperatively organized trade outlets. 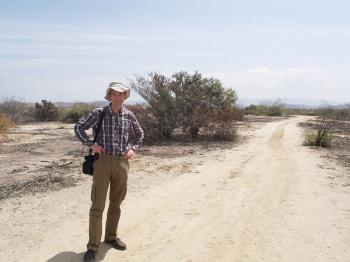 Semi-arid environment in which organic bananas are grown in Peru.

Aiming to have all bananas produced in an organic system and produced by smallholders is an interesting objective; and has been quite successful in Peru and some other places. It will, however, never be able to meet the demand for bananas. Organic bananas cannot be produced in any significant quantity unless they are produced in monocultures located in environments inherently hostile to the plant itself and its pests, with the result that bananas need to be irrigated using increasingly scarce water resources. Trying to cure the industrial banana industry also seems to be a dead end. How much can we realistically expect from efforts to reduce pesticide use, aerial spraying, even breeding new varieties with some resistance, if that resistance is quickly lost? The diseases will always be faster to attack monocultures of banana than scientists can breed resistant varieties or formulate new chemical compounds that are more effective and less harmful to the environment.

Perhaps the strongest message from the conference is that we need to rethink the whole structure of the banana industry in a fundamentally different way. Given the large number of social, ecological and agronomic problems, like massive aerial spraying, pesticide-linked health problems, the spectre of Fusarium wilt threatening the large-scale monoculture banana industry, the time might be favourable for some creative-destructive, game-changing process. A kind of Hegelian dialectic process, with as thesis the traditional banana industry (which can meet the demand for cheap bananas but at the expense of workers and the environment), and as antithesis the authentic organic Fair Trade banana (which has great respect for people and the environment but is not able to deliver on volumes). The synthesis could be a new production system in which bananas would be more expensive, but which would offer more varietal diversity, better tasting bananas, a smaller environmental footprint and significantly better social conditions. A dream?