Loading...
Under the peel » The complexity of describing banana diversity

Last December I attended a MusaNet workshop on best practices for Musa germplasm collection and data management held at CIRAD’s field collection on the Caribbean island of Guadeloupe. The traditional group photo hints at the diversity of both the experts looking after the world’s bananas and of the bananas themselves. The setting was perfect for discussing the pièce de résistance of the workshop: the Taxonomic Reference Collection (TRC).

The TRC is a set of 29 ITC accessions representing many of the subgroups of banana cultivars and two wild relatives. To date the TRC has been planted in 12 field collections located in different banana-growing regions*. One of the issues the TRC aims to address is the influence of the environment on the banana plant’s phenotype. 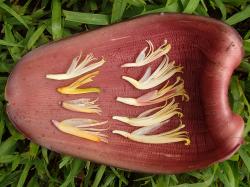 Even though plants of the same cultivar have essentially the same genetic makeup, some of their morphological traits look different depending on the local growing conditions, a problem that has knock-on effects on the analysis of characterization data, information exchange among genebanks (as when only the local name is known) and the classification of cultivars. By comparing the characterization data from the 12 locations, it should be possible to identify which of the 124 morpho-taxonomic descriptors in the 1996 edition of Descriptors for Banana are stable across environments (using planting material belonging to the same genebank accession ensures that the plants being compared are genetically identical). But before you can zero in on the most stable descriptors, you need to eliminate two factors: differences in how the field collections are managed, and differences in how the descriptors are interpreted depending on who is scoring them.

The issue of field collection management was addressed by a review of existing guidelines supported by field demonstrations led by Kodjo Tomekpe and John Thomas. To illustrate the interpretation problem, the Chair and Co-Chair of the MusaNet working group on diversity, Edmond de Langhe and Jean-Pierre Horry, led an exercise on characterization. Edmond had previously proposed 20 descriptors well-known for being difficult to interpret. In a first step, the participating curators characterized the same four cultivars using the 20 descriptors. The results were striking. 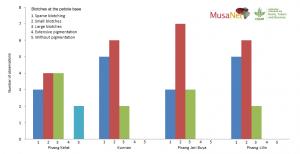 Spread of answers given by 13 curators scoring the same descriptor on 4 different accessions.

In the best of cases, the majority of the curators would select the same answer, with only a few opting for another one. Most of the time, however, opinions were divided. For example, when looking at the blotches at the base of the petiole (descriptor 6.3.1), the curators looking at the same plant couldn’t agree on the extent of the blotches (see graph). After this interesting session, the curators went back to the field to discuss with Musa taxonomy experts the interpretation of the descriptors. The exercise underscored the need for more detailed explanations to increase the reliability of characterization data and for more training to ensure that the descriptors are interpreted in the same way.

We also discussed other topics, such as data management and the role of the Musa Germplasm Information System (MGIS) as a repository of characterization data for the world’s Musa collections. The participants particularly liked the demonstration by Max Ruas of a tablet he adapted to capture characterization data in the field and send them directly to a computer.

On the final day, a number of actions were proposed to improve the management of Musa collections and the TRC project, make better links with regional networks, attract funding and disseminate the knowledge gained from the workshop at the regional and local levels. The cross-cultural and cross-organizational exchange was a fitting conclusion to a very productive week.

The workshop was organized by Bioversity International in collaboration with CIRAD and the Centre for Biological Resources of Tropical Plants and funded in part by the CGIAR Research Program on Roots, Tubers and Bananas. It was attended by 31 participants, including the curators and resource people in the group photo. The report of the workshop is available on the MusaNet website.

*The 29 accessions of the TRC are available from the ITC via MGIS.  If you have any questions or are interested in being a partner in the TRC project, please contact Julie Sardos at j.sardos at cgiar.org