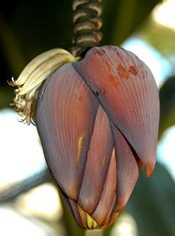 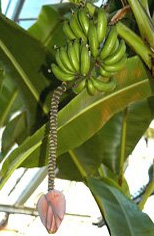 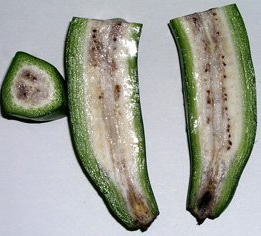 The upper part of the Wadi Tiwi, in Oman's Jabal Bani Jabir mountain range, is known for its abundant fresh water, which in the past facilitated trade along the eastern coast of Arabia, and terraces of date palms with an understory of citrus and bananas. A 14th century account also describes lush banana gardens. The oases are now mostly abandoned, but in the course of two visits in 2003 and 2004, six banana suckers were collected at the Umq Bi'r oasis and taken to the University of Kassel, in Germany, where they were grown in greenhouses.

Most of the plants turned out to be well-known relatively drought-tolerant cultivars, except for one specimen described in a recent issue of Genetic Resources and Crop Evolution. Flow cytometry and an analysis of the plant’s morphology allowed the authors to classify the unknown variety in the AAA genome group. They draw attention to the shape of the male bud (left photo), which is plump and rounded with extremely imbricated bracts early on and becomes slender and lanceolate as the fruits mature, a feature they say has never been described before.

The authors speculate that the variety, which they named Umq Bi’r, might have reached Oman many centuries ago via Zanzibar, Madagascar or the Comoros.