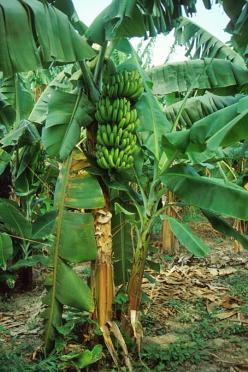 A sucker is a shoot that develops from a lateral bud on the rhizome and emerges from the soil usually near the parent plant. It is a form of asexual, or vegetative, reproduction, that makes the banana plant perennial. Suckers emerge and ensure a more or less continuous supply of shoots, each capable of producing an inflorescence. They have been used as planting material since the early days of domestication by severing them from the mat and transplanting them to a new location.

Both wild species of bananas and cultivated bananas produce suckers. The horticultural term for the clump of shoots and the rhizome through which they are interconnected is a mat. The botanical term for a mat is genet and for the above-ground ground shoots is ramet.

Wild species may produce few or many suckers. Over time, some form dense and compact mats. This strategy, together with dormant seeds that germinate in disturbed soil, enables wild bananas to quickly colonise the edges of disturbed forest clearings. Norman Simmonds referred to wild bananas as "jungle weeds".1

Suckers arise from lateral buds on the rhizome. Each leaf that is attached to the rhizome has a lateral bud at its base. The formation of these lateral buds is suppressed from the time of floral initiation, when the aerial true stem begins to elongate.2 3 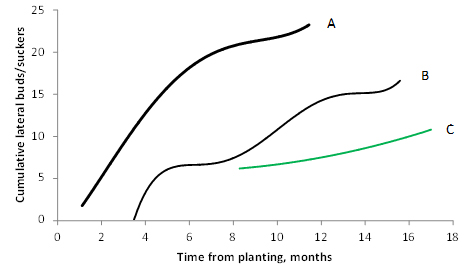 Each lateral bud that forms (Line A in the graph) is capable of growing into a sucker, but not all do so.4 Many of the lateral buds swell (Line B), but only some of these develop into suckers. They grow laterally for a distance and form a sucker that grows towards the soil surface (Line C). From 6% to 40% of lateral buds produce suckers, depending on the cultivar, seasonal conditions and the presence and stage of development of the parent plant.5

For a lateral bud to develop into a sucker a switch is necessary to begin growth and a supply of carbohydrates is needed to keep things going. A flush of gibberellin is thought to act as the switch.6 The bud also needs to be receptive to the flush of gibberellin. According to this hypothesis, a bud begins to grow when the gibberellin flush coincides with bud receptivity. Since the bud is a living organ, it needs an adequate supply of carbohydrates to support its growth into a sucker. The emergence of many suckers above the ground, such as happens in Plantains grown at high altitude (2200 m) 7 5  means carbohydrate is available to support their growth.  Far fewer suckers emerge in plantains grown at the same latitude but lower altitude (1100 m), implying that in these plants carbohydrate is either not available or not allocated to support sucker growth. 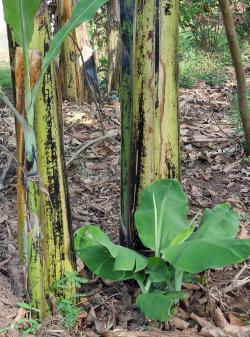 The sucker appears above the soil and its state is characterised in part by its appearance. Initially, suckers have only leaf sheaths without a midrib or lamina. In horticultural terminology they are called peeper suckers. Some remain at this stage without further growth. Others continue to grow and produce leaves with a midrib and a very narrow lamina. They are then called sword suckers. Sword suckers gradually produce leaves whose laminae are broad and of the adult form (see photo). The sucker selected to replace the parent plant is called the follower or ratoon.  Sometimes, ratoon suckers that have not fruited are referred to as maiden suckers,8 although this term is poorly defined, and it can be difficult to determine whether a sucker at this stage is vegetative or contains an unemerged bunch.

Lateral buds may survive on sections of the rhizome after the aerial stems of earlier generations have decayed. Suckers that arise from these lateral buds usually have a small rhizome and broad leaves. They are called water suckers and their connection to the rhizome is often structurally weak. For this reason, water suckers are not suitable for selection as a ratoon to continue the life of the mat into the next generation. However, water suckers can still be a source of planting material to establish a new plantation. Oppenheimer and Gottreich compared sword and water suckers, excised from the parent plant and of equivalent height at planting.9 For plants that flowered at the same time, bunches from sword suckers and water suckers were of a similar size.

There are various local names for suckers, including keiki (in Hawaii) and pup (mostly used in the American garden nursery industry).

An excess of suckers can lead to reduced bunch weight, especially in ratoon crops.10 The number of suckers that are allowed to develop and mature is managed by pruning (desuckering).11

List of the sucker-related descriptors used to characterize banana plants.14

6.3.23 Blotches on leaves of water suckers
(Leave blank if there is no water sucker. See Types of suckers above for the description of a water sucker)
1.   Without blotches
2.   Little or narrow blotches
3.   Large purple blotches

TC, or not TC. Is that the question? Blog comparing the performance of tissue-culture banana plantlets and suckers as planting material.

Propagation protocols and standards for bananas, chapter in FAO plant production and protection paper 195. Also available in French and Spanish.