Loading...
Under the peel » Genetic modification of bananas: the long road to farmers' fields

Technological advances have changed the landscape with regards to the genetic improvement of bananas. Conventional breeding has become more sophisticated and more efficient at generating new cultivars. In parallel, efforts to genetically modify bananas have been highly successful (about 20 cultivars have been transformed so far), while genome editing has the potential to introduce disease resistances, as well as other valuable traits, into banana cultivars.

The key technical differences between these two approaches are that with conventional breeding the output will be a different cultivar as it is virtually impossible to introgress new traits into a banana cultivar without linkage drag resulting in many other changes to the original cultivar. In contrast, any banana cultivar can be genetically modified as long as the gene responsible for a particular phenotype is available and it is possible to generate suitable cells that can be transformed and regenerated. The addition of one or a few new genes to a cultivar should not significantly alter its background characteristics.

So far, the majority of the broad spectrum resistance transgenes have been derived from non-banana sources or non-plant sources. There are only two examples of the modification of bananas for disease resistance involving banana-derived genes, both of which targeting Fusarium wilt: the RGA2 gene isolated from Musa acuminata spp. malacenssis for resistance to TR4, and the programmed cell death-related genes Musa DAD1, Musa BAG1 and Musa BI for resistance to Race 1 strains. There have also been a number of reports of the use of pathogen-derived RNAi-inducing transgenes for disease resistance, most of them targeting bunchy top and one of them targeting Fusarium wilt.

The development of abiotic stress tolerance has been less successful. While in each instance there were positive indications at the glasshouse level, none of the modified plants progressed to field trial. Interestingly, all but one of the transgenes were derived from bananas. 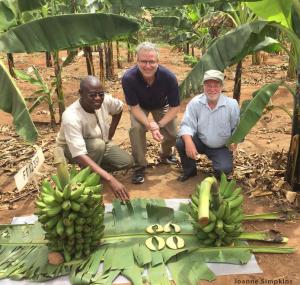 From left to right: W. K. Tushemereirwe, Fil Randazzo and James Dale in one of the field trials of biofortified bananas in Uganda.

Biofortification has also been a target for banana genetic modification. Both pro-Vitamin A- and iron-biofortified bananas have progressed through to field trials in Australia and Uganda, subsequent to glasshouse evaluations. Pro-Vitamin A-biofortified East African Highland Banana cultivars (modified with a single banana gene from Asupina, a Fe’i cultivar) have entered Phase 4, which includes multi-location regulatory field trials at four different agroecological zones across Uganda. It is likely that these will be the first GM bananas released to farmers.

To date, cultivars with AA, AAA, AAB and ABB genomes have been transformed, which suggests that genetic transformation of bananas is not highly genotype-specific, in contrast to many other crops. It is likely, therefore, that almost any cultivar can be transformed given sufficient effort.

There are currently no reports of genetic modification being used on fertile diploid bananas, but this is likely to come. Genetically modified fertile diploids could be useful as parents in conventional breeding programmes particularly as a mechanism to introduce traits that are not available in the accessible banana gene pool such as, for example, resistance to bunchy top.

What about genetic editing?

The situation regarding genome editing in bananas is more complex than anticipated. The first challenge is of a regulatory nature. There was hope that international regulations would be harmonised across the world where specific applications of genome editing would not be classified as genetic modifications and therefore not require extensive regulation and possibly labelling. This has not eventuated and there is a general lack of agreement about the need to regulate the products of genome editing.

Argentina was the first country to adopt specific regulations for genome-editing technologies (Resolution 173/2015). Under this policy, the Argentinian regulatory authority (CONABIA) decides the regulatory status of genome-edited plants on a case-by-case basis, with deregulation approved for several crops. A similar resolution was recently issued by Brazil in 2018 (Resolution 16/2018) and it is expected that similar guidelines will be introduced in Chile. The scientists, policymakers and regulatory authorities in Argentina, Brazil, Chile, Paraguay and Uruguay are currently working towards the harmonisation of their genome-editing regulations.

In the United States, the agency responsible for regulating GM plants and crops is the United States Department of Agriculture (USDA). Until recently, the regulatory status of crops generated through genome-editing technologies was decided on a case-by-case basis. Under this system, the USDA allowed the non-regulated cultivation of CRISPR-edited non-browning mushrooms and waxy corn. More recently, the USDA indicated that crops modified by CRISPR or other genome-editing techniques would not be regulated, thus greatly reducing the time for commercialisation and compliance costs.

Japan and Australia will consider only plants edited using the SDN-1 (site-directed nuclease-1) approach as not genetically modified. SDN-1 does not involve any additional insertion of DNA and therefore is limited to knock-outs or base substitutions. This excludes moving genes or parts of genes from, for instance, one banana to another by homologous recombination. In South Africa, GMO legislation is currently applied to all plants developed using genome editing although there are ongoing discussions regarding policy amendments.

The extreme position is that of Europe and New Zealand where all genome editing is now defined as a form of genetic modification. Europe has incredible restrictive regulations regarding the growth or importation of modified crops and food and this now includes crops and foods that have been or will be genome-edited. The practical effect of this is that it is virtually impossible to gain access to the European market with a genetically modified product other than, for instance, corn and soybeans for animal feed and cotton as a fibre. Europe is the largest importer of bananas, the vast majority of which are Cavendish cultivars. However, only around 15% of the total banana production is exported, and Europe imports about 6 million tonnes, which is less than 5% of world production. The reality is that the global influence of Europe's position on modified crops in relation to bananas is far greater than their proportion of the market should justify.

Genome-edited bananas are already a reality. There are three examples of gene editing in bananas all using CRISPR/Cas9. One strategy knocked out the phytoene desaturase (PDS) gene in Cavendish and tri-allelic knock-outs had an albino phenotype as expected. Genome editing was used to delete sequences of the Banana streak virus in the Plantain 'Gonja Manjaya', and the PDS gene was also knocked out in Rasthali.

These results suggest that genome editing, like genetic modification, will not be strongly genotype specific in bananas. However, all these edited plants are transgenic as they all contain an integrated cassette containing a selectable marker gene, the Cas9 gene and the guide RNA gene. In seed-propagated crops, it is possible to 'breed away' from the integrated CRISPR/Cas9 cassette. This is not possible with bananas unless the edited banana is to be used in a conventional breeding programme. Therefore, to develop an edited 'non-GM' banana, it will probably be necessary to only transiently express, for instance, the guide RNA and the Cas9 protein, perhaps as a ribonucleoprotein and the edited cell will need to be regenerated in the absence of a selectable marker. A possible approach would be to develop a protoplast generation and regeneration protocol to ensure that resulting edited plants are regenerated from a single edited cell. This will be challenging.

The chapter was written by James Dale of Queensland University of Technology (QUT), W. K. Tushemereirwe of NARO and Robert Harding of QUT.