Loading...
Under the peel » What's in store for organic bananas?

The export of certified organic bananas has increased exponentially over the last 25 years, reaching 57 million boxes of 18 kg in 2016, according to Dole's Market Intelligence Group. This volume represents 8% of total Latin American banana exports, which is huge compared to other fresh produce commodities. The demand for organic bananas seems unstoppable, but can they ever become mainstream?

The main obstacle to producing organic bananas is black leaf streak (better known as black Sigatoka), a fungal disease that attacks the leaves and reduces yields, and to which the Cavendish cultivars that dominate the conventional export trade are highly susceptible. The disease also induces premature ripening of bananas during transport which can spoil whole containers of bananas. 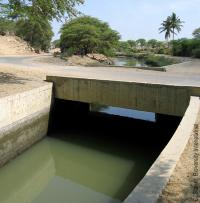 Black leaf streak is a highly aggressive disease. Moreover, in the wet tropics, the dry spells are too short to slow it down. Therefore, the only way to organically produce Cavendish bananas is to avoid the disease altogether by planting in dry areas, less than 600 mm of rain a year. The challenge in these areas is to find reasonably good soils with low salinity levels and a year-round supply of good quality water for irrigation.

In Latin America, certified organic bananas are primarily produced in the Dominican Republic (around Azua in the south, and Mao, Valverde and Montecristi in the north), Ecuador (Manabi in the northwest, and towards the south from Puerta Inca to Santa Rosa), Peru (Tumbes, Sultana and Piura in the northern coastal region) and Colombia (from Palomino to Riohacha in the northeast region bordering the Guajira desert). Organic bananas are also grown in Colima, Mexico, where rainfall conditions and humidity are not as low and the risk of the disease is higher. Helicopter spraying of fungicides to control black leaf streak disease in a plantation of bananas for export.

In the conventional banana production systems of the wet tropics, black leaf streak is controlled with synthetic fungicides. The number of applications depends on climatic conditions in terms of rainfall, humidity and minimum night temperatures. Fungicide cycles can be as frequent as once a week. This is clearly not sustainable. Due to the extreme susceptibility of Cavendish bananas to black leaf streak, all attempts to produce them organically for the fresh banana export market have failed across the wet tropical regions.

The philosophy of organic agriculture is that it achieves sustainability "by use of cultivation techniques that encourage soil conservation and enhance soil fertility, resulting in healthy plants that withstand pests and diseases…". But this has never resulted in the control of the air-borne fungus that causes black leaf streak.

Despite claims to the contrary, no effective organic fungicide exists for the control of black leaf streak. Aerial applications of horticultural oils are permitted under organic agriculture rules. But while mineral oil (a petroleum-derived oil) slightly delays the expression of the disease, it does not control it. Neither do vegetable-based oils, such as palm oil. And none of the organic fungicides currently on the market are effective by themselves. They are all recommended to be used with copious amounts of mineral oil.

Copper-based fungicides, some of which are allowed in organic agriculture, have shown very limited efficacy. In fact, they are phytotoxic to young banana leaves. In addition, they cannot be applied frequently as this would lead to the accumulation of copper in the soil.

Antagonistic microorganisms isolated from older banana leaves have been shown to reduce germination under laboratory conditions, but lack efficacy under field conditions because the fungal spores land on and infect the cigar leaf before microorganism populations can establish themselves sufficiently.

The only practice that mitigates the effects of the disease somewhat is the meticulous removal of necrotic leaf areas to reduce the inoculum load. This practice, together with de-handing (the removal of up to six distal hands) to bring the harvesting date forward, can reduce premature ripening. However, it increases labour costs and reduces yield. It also opens the canopy, which stimulates weed growth. 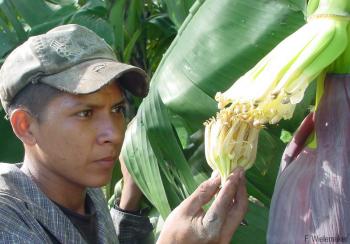 Pollinating a Cavendish cultivar to produce an improved hybrid.

So can organic bananas ever become mainstream? Well, only if the black leaf streak issue is resolved in the conventional Cavendish banana production systems of the wet tropics. This is because there are not enough dry areas that have the types of soils and temperatures which bananas need to thrive, as well as sufficient water for irrigation to make-up for the deficit in rainfall. Thus the only solution is the development of resistant banana cultivars through classical breeding, since genetic engineering is prohibited in organic agriculture. So far, no Cavendish-like cultivar with resistance to black leaf streak has been released commercially. Hopefully, conventional breeding will one day provide a solution.

Genetic engineering is an option for the conventional banana industry to eliminate or sharply reduce synthetic fungicide aerial spray cycles. The result of a genetically modified Cavendish banana would be a cultivar with the same production and marketing traits. This would be a major change for the conventional banana industry and make it much 'greener’ and thus more sustainably produced Cavendish bananas would become available for the wet tropics. New technologies such as cisgenesis (using genes from a resistant wild relative) may make genetic modification more acceptable to the general public. In this respect, the CRISPR Cas-9 technology is much more precise because it edits only particular gene(s), and this technology could be used to engineer black leaf streak-resistant Cavendish bananas without inserting 'foreign' DNA.

Will organic regulations be modified to accept these modern genetic engineering techniques? Probably not.

Frans Wielemaker, a former Director of Research at Dole, is an independent consultant (AGROASESORIA) and president of  TRANSASTRA, a company that markets inputs to organic banana farmers.