Root-knot nematodes (RKNs) are obligate sedentary endoparasites of plants from the genus Meloidogyne. The genus consists of 98 species that parasitize more than 2,000 plant species. These nematodes are called root-knot because of the characteristic galling symptoms on the roots. While young plants may not survive infection, mature plants mostly suffer from decreased yields, with typical above-ground symptoms reflecting malfunctioning root systems. RKNs are present in all banana-growing regions and can be especially damaging to the cultivars of the Cavendish subgroup. The most frequent species associated with banana are M. incognita, M. javanica, M. arenaria and M. hapla. 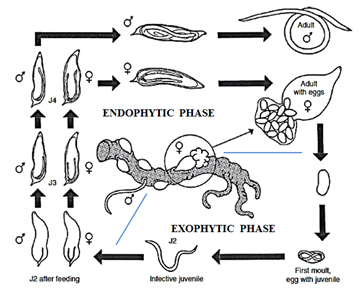 The male and female adult of Meloidogyne spp. exhibit sexual dimorphism, with females displaying pear-shaped distended bodies, and males a vermiform morphology. The sedentary adult female is pearly white in colour, with a rounded to pear-shaped body and a protruding, sometimes bending, neck. Females range in length from 350 µm to 3 mm and a maximum width from 300 to 700 µm. The wormlike males are 1.2 to 1.5 millimeters (mm) long by 30 to 36 micrometers (µm) in diameter. The infective second-stage juvenile (J2) is vermiform, annulated, and ranging in length from 250 to 600 ?m; the head structure is as in males but much smaller and with a weakly sclerotized cephalic framework. The third-stage juvenile (J3) and J4 stages are sedentary inside the roots and swollen; they have no stylet and develop within the J2 cuticle.

In full-grown females, annulation of the cuticle is only visible in the head region and the posterior area, where a characteristic unique cuticular pattern or perineal pattern can be observed around the perineum (vulva–anus region). The shape of this pattern can vary and be influenced by developmental factors. The perineal pattern of the M. incognita female is oval, rounded, usually with the square and high dorsal arch, usually wavy streaks, lateral field absent or poorly demarcated lines by forked streaks. The perineum is terminal with phasmids occuring just above the anus. Usually the anus is covered with a small cuticular fold and the perineum can be slightly elevated. Some species have lateral lines or sub-cuticular punctuations above the perineum. M. incognita can also be diagnosed through characterization of esterase and malate dehydrogenase isoenzyme profiles.

Reproduction is mostly parthenogenetic, with a high percentage of males produced during adverse conditions. Different reproductive modes exist, with some species reproducing by anfimixia (sexual reproduction), or through meiotic or mitotic parthenogenesis. The most common species M. incognita, M. javanica and M. arenaria reproduce by mitotic obligatory parthenogenesis.

Chromosome numbers can vary considerably. For example, cytogenetic analysis of isolates of M. incognita report from 32 to 36, or 40 to 48 chromosomes. Given a haploid number of 18 chromosomes, based on observations of meiotic Meloidogyne species, RKNs are diploids (2n) or hypotriploids (3n?x) that have lost chromosomes.

All Meloidogyne spp. have a similar life cycle. Eggs are deposited in gelatinous masses and survive in the soil or in plant residues. The female produces an average of 500 eggs. The first juvenile stage (J1) emerges from the egg and, after the first moult, gives rise to the infective second-stage juvenile (J2). The mobile juvenile moves towards the root tips and penetrates the root tips of susceptible hosts. It migrates through the root and establishes feeding sites (known as giant cells) in vascular parenchyma cells by injecting substances secreted from its esophageal glands. The nematode then ingests the cytoplasmic content of giant cells, acting as a metabolic drain that diverts nutrients from the plant to the nematode. Nematode secretion secretions culminate in hypertrophy and hyperplasia of cells, usually accompanied by enlargement of the roots with the formation of galls. During the process, J2 increase in width and undergo moulting to the third stage juvenile (J3), fourth stage juvenile (J4) and finally to the male or female adult stage. Males can occur in parthenogenetic species, typically during adverse conditions such as when nutrients are limited or where population densities are high.

The development and duration of the life cycle depends on the host species and environmental factors. The average cycle is from four to six weeks in bananas.

The most distinctive symptom of Meloidogyne infestation is the appearance of galls on primary and secondary roots, which become swollen and distorted with heavy infestations. Galls vary in size, reaching up to 15 mm in diameter.  In bananas, M. incognita infection typically result in the formation of small galls on the roots or fine dilations in thicker fleshy roots.  Different Meloidogyne species can occupy the same gall, as well as colonize the outer layers of the rhizome, where reddish-brown patches appear in the conducting vessels. Observation of longitudinal sections of infected root material with the naked eye can reveal females at various stages of maturation, together with associated blackened haloes known as “female’s chamber”.

In aerial plant parts, Meloidogyne can cause reduction in size and chlorosis of leaves, compromising plant development. Reduced yield and delay and unevenness in fruit ripening are also observed. Leaf symptoms include a progressive die back of older leaves from the leaf tip. Heavily-infested plants are stunted with thin pseudostems and discoloured greenish-yellow bands apparent along the leaf blades.

Once introduced into an agricultural area, RKNs are difficult to eradicate. Given the frequent nematode spread via contaminated farm machinery, vehicles, containers and tools, measures to prevent introduction and spread — such as use of certified planting material and clean farm machinery — are important management strategies.

Crop rotation is a possible management strategy. In the case of RKN species with broader host ranges — such as M. incognita, M. javanica and M. arenaria — effective crop rotation remains a challenge.

Use of nematicides to control RKNs has been widely employed since the 1960s, although this disease management practice is now in decline, due to high production costs or suspensions that reflect environmental and human health risks. In bananas, genetic improvement in relation to resistance to nematodes has so far been limited, which reflects the constraints to breeding in this parthenocarpic and often sterile vegetatively propagated crop.

In recent years, RNA interference (RNAi) has been exploited for both gene function analysis and gene silencing in plant-parasite nematode interactions. RNAi is the suppression of gene expression induced by nucleotide sequence-specific double stranded RNA (dsRNA) and short interfering RNA (siRNA), leading to degradation of homologous transcripts. RNAi has been applied to the control of Meloidogyne species. For example, transformation of Arabidopsis with double stranded RNA that targeted a nematode parasitism gene successfully rendered the plants resistant to four RKN species. The characterization of nematode secretions containing parasitism effectors and the development of RNAi technology should improve our understanding of the molecular events and regulatory mechanisms involved in plant parasitism.