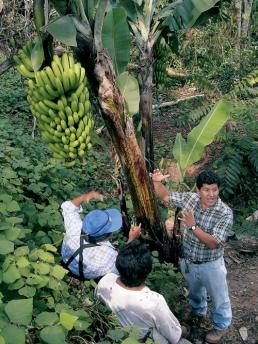 The Cavendish subgroup includes the cultivars that dominate the international trade (e.g. Grande Naine, Williams and Valery) and as such have set the standards in terms of taste, yield and post-harvest characteristics expected of an export banana.  Their domination of the international trade started in the late 1950s because of their resistance to the race 1 strains of the fungus that cause Fusarium wilt in Gros Michel, and that put a stop to its cultivation for the export market.

Because of the spread of race 1 strains, to which other dessert types are also susceptible, more Cavendish cultivars are now grown for domestic markets than for the export trade.1 They are estimated to account for 57% of the global production of bananas for the year 2018.2 Most of that production was destined for domestic markets since the export trade in Cavendish cultivars represented about 16% of global production that year2 .

In the meantime, another strain of the fungus, the so-called tropical race 4, emerged in Asia and has since spread widely, threatening the export trade based on Cavendish cultivars.

Cavendish cultivars belong to the AAA genome group, which includes the cultivars that have three sets of chromosome inherited from the wild species Musa acuminata as ancestor (see Domestication of the banana). Although the ancestor of the Cavendish subgroup, like all the other domesticated bananas, could no longer reproduce sexually, it could change through somatic mutations and epigenetic processes. The selection and propagation of somatic variants that display desirable morphological characters or improved agronomic performance continue to add new cultivars to the subgroup.3 The exact number is not known.

The name Cavendish is derived from the Latin name Musa cavendishii given in 1837 to a greenhouse specimen in honour of the owner of the plant, the Duke of Devonshire whose family name is Cavendish.4 The British botanist Ernest Cheesman gave the name Cavendish to the group of banana plants at the Imperial College of Tropical Agriculture in Trinidad that was connected to the greenhouse specimen "by a series of intergrading mutant forms".5

The cultivars in this subgroup are difficult to tell apart and exhibit a gradation in height from the shortest (Dwarf Cavendish) to the tallest (Lacatan). The fruits are long and slightly curved. A persistent floral relict is attached to the fruit apex, which is moderately tapered. The bunch is cylindrical, with 10 or more hands.

Molecular analyses of accessions in collections have revealed that Cavendish and Gros Michel cultivars are half-siblings, that is they have a parent in common, the one that contributed both copies of its genome (triploid bananas are derived from a cross between two diploid parents — one which normally passed on one copy of its genome, whereas the other contributed both copies, a phenomenon called meiotic restitution). The latter has been identified as a cultivar in the Mlali subgroup, a group of diploid bananas currently found in East Africa only. The closest living representative related to that ancestral Mlali cultivar is Chimoili Kana Nkoboï,6 not Akondro Mainty as previously thought.7 The parents that contributed one copy of their genome were probably different, but genetically close cultivars from the Khai subgroup.6

Local names and synonyms of Cavendish cultivars in the banana cultivar checklist.

1 The rise of the Cavendish in the Trap of extinction stories on bananas, published 24 October 2017 in InfoMus@'s News and analysis
2 ● Lescot, T. 2020. Banana genetic diversity: Estimated world production by type of banana FruiTrop, 269:98-102
3 Planet Cavendish in The hidden side of banana diversity, published on 24 October 2017 in InfoMus@'s News and analysis
4 Musa cavendishii, published in 1837 in Paxton's Magazine of Botany and Register of Flowering Plants 3:51-52.
5 Simmonds, N.W. 1954. Varietal Identification in the Cavendish Group of Bananas. Journal of Horticultural Science 29(2):81-88.
6 ● Hippolyte, I., et al. 2012. Foundation characteristics of edible Musa triploids revealed from allelic distribution of SSR markers. Annals of Botany 109(5):937-951.
7 Perrier X. et al. 2011. Multidisciplinary perspectives on banana (Musa spp.) domestication. Proceedings of the National Academy of Sciences of the USA, 108(28): 11311-11318.

The hidden side of banana diversity, published 24 October 2017 in InfoMus@'s News and analysis section.