Turkey at a glance 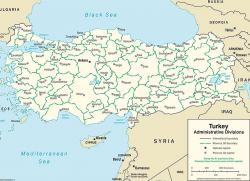 Turkey has been producing bananas since the first half of the 20th century, even though the country lies outside the tropical and subtropical climate zones. Bananas are grown along the Mediterranean coast, protected by the Taurus mountains. They were grown exclusively in open fields until the 1990s, after which cultivation under protection was introduced. The majority of the bananas are now grown in plastic-covered greenhouses.

The banana is a desirable crop because it can be harvested within a year of planting and the retail price is high because of import taxes of more than 140% 4 . The demand for bananas has steadily increased over the years. In 2016 it was 521,000 tonnes,  217,000 of which were imported4 .

Bananas are grown in four provinces along the southern coast of Turkey. The main banana-growing regions are the towns of Alanya and Gazipa?a in Antalya Province, and of Anamur and Bozyazi in Mersin Province.

Bananas are cultivated in open fields, on flat land as well as steep slopes, or protected in plastic-covered and metal-framed greenhouses. Pests and pathogens are generally not a problem. The most common pest is nematodes. Spider mites (Tetranychus lambi) can affect bananas grown in greenhouses.

The main differences between the two cultivation systems are the yield and the number of days from shooting to harvest. In a study comparing 'Dwarf Cavendish' growing in open fields and in greenhouses conducted in Alanya, the average bunch weight was 27 kg and 40 kg respectively5 . The average time from shooting to harvest was 153 days in open fields, compared to 128 days in greenhouses. The authors attributed the results to the higher temperature and relative humidity in the greehouses, as well as the absense of wind. In the open fields, the mean yearly minimum and maximum temperature and relative humidity were 16 and 26°C and 47 and 82%, compared to 15 and 33°C and 54 and 88% in the greenhouses.

In summer, shading powder is applied on the plastic of the greenhouses to protect the plants and fruits from sunburn damage. Since the greenhouses are generally not heated, significant fluctuations in temperature between day and night in winter can negatively affect the plants.

Goat manure is applied (20 to 40 kg/year/plant). The main fertilizers are nitrogen, phosporus and potassium.

A drip irrigation system is used in both cases. An extra fine droplet sprinkler is installed in the greenhouses to increase humidity.

Whereas removing the male bud is a common practice in many banana-growing countries, farmers in Turkey are divided on whether it improves yield and fruit quality. A study conducted in 2013-14 in Gazipasa, province of Antalya, showed a reduction in the number of days for fruit filling and an increase in bunch weight9 .

Photos from the field trip to Alanya, Antalanya province, that was organized as part of the 2018 ISHS-ProMusa symposium: