Loading...
In pictures » The workings and impact of a world-class collection

A study conducted by Bioversity International documented and assessed the performance of the International Transit Centre (ITC) in conserving and distributing banana genetic diversity in the form of tissue culture plantlets. It provides an overview of the impacts created over its first 25 years of existence and presents an evaluation of the service based on a survey among its users. 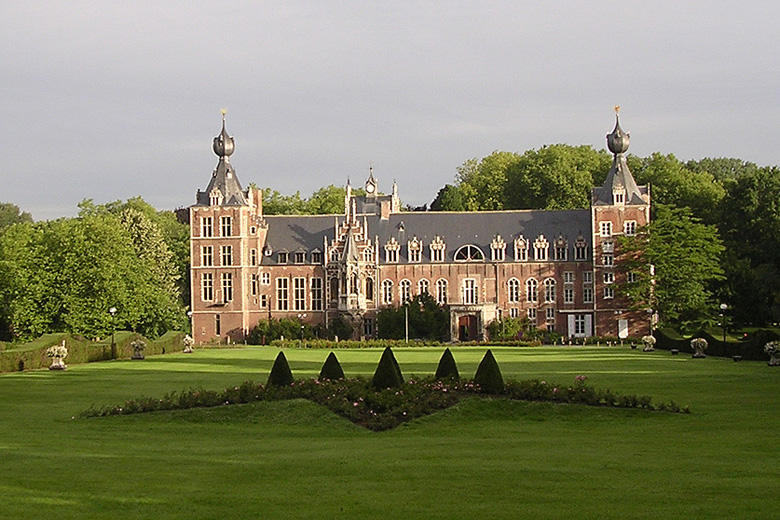 The ITC houses the world’s largest collection of bananas. Managed by Bioversity International, under the auspices of FAO, it is located in Belgium, on the grounds of the Katholieke Universiteit Leuven (KULeuven), whose best known landmark is the Arenberg castle. The collection was set up in 1985 and is hosted by the university’s Laboratory of Tropical Crop Improvement, which provides extensive expertise on bananas. At the time, only places that do not grow bananas were considered, to avoid the risk of introducing new diseases to native bananas. Being located in a non-producing country also facilitates receipt of banana samples from anywhere in the world, due to the absence of quarantine restrictions. (Photo Anne Vézina) 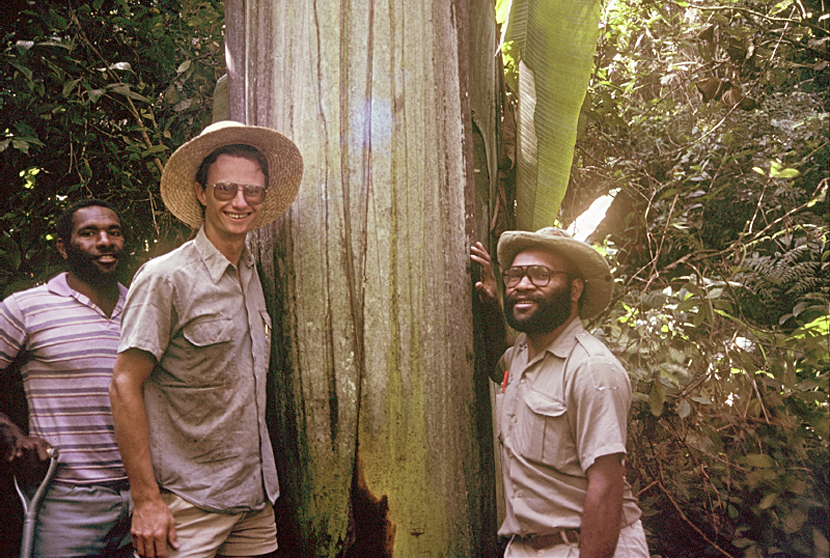 The collection was established from various sources. Many research centres, such as the French international agricultural research centre CIRAD, the Fundación Hondureña de Investigación Agrícola in Honduras and the International Institute of Tropical Agriculture in Nigeria, donated material from their collection. A series of collecting missions, especially the ones conducted in Papua New Guinea at the end of the 1980s, also contributed to the holdings of the ITC. (Photo Jeff Daniells) 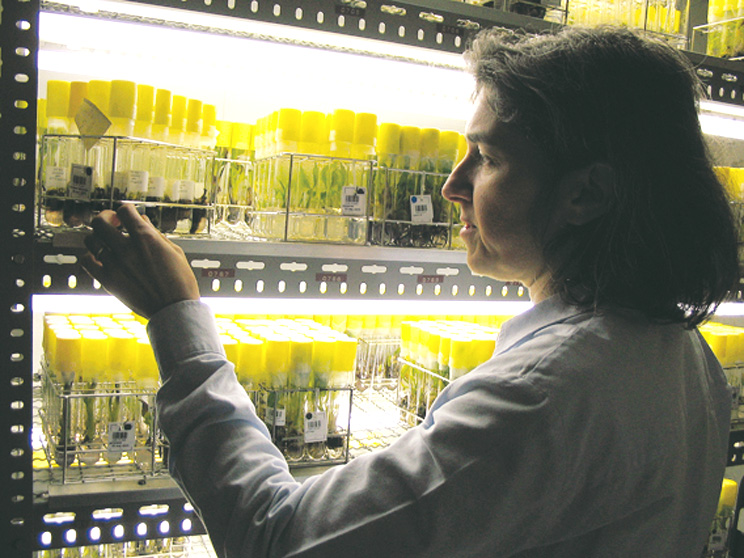 Given that cultivated bananas do not produce seeds, the accessions (as individual entries in a collection are known) are kept as small plantlets in test tubes. Such collections are described as in vitro, literally meaning ‘in glass’. The number of accessions conserved this way at the ITC has grown from 61 in 1986 to 1329 at the end of 2010. (Photo Bart Panis) 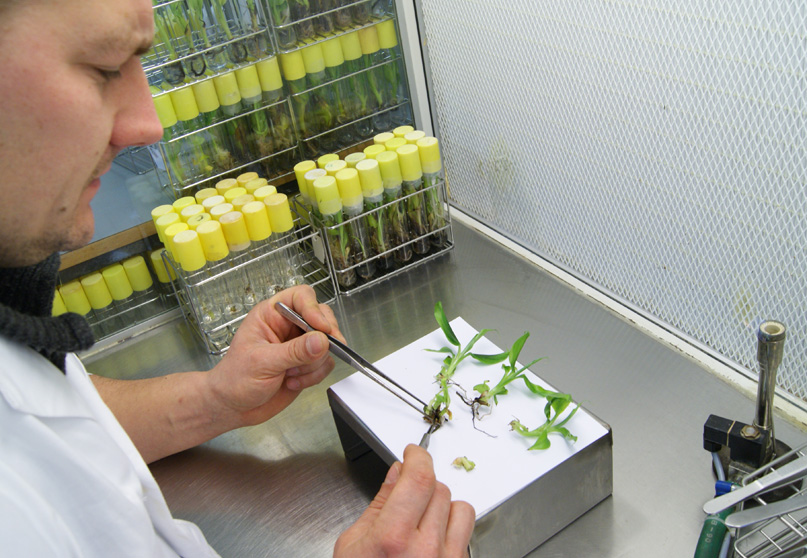 The process starts with the excision of the shoot tip, undifferentiated tissue from which new cells are formed, which is then cultured on a sterile growth medium. Even though the temperature and lighting are kept at a minimum to slow down the growth process, the plantlets eventually outgrow their test tube. As a consequence, each accession is re-cultured once a year. (Photo: Ines Van den Houwe) 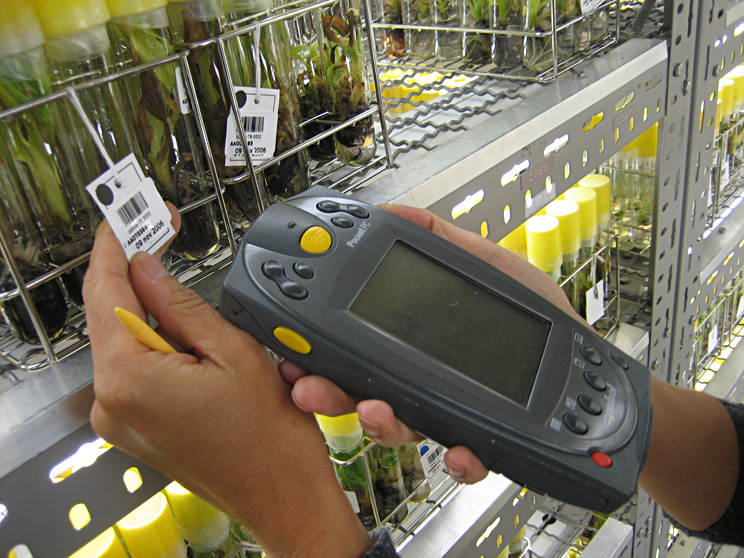 A computerized management system makes it easier to manage the in vitro genebank by recording every thing that is done to each plantlet, thereby reducing the risk of mix-up. Each plantlet also carries a barcode that carries information on its identity, its main characteristics and whether it is available for distribution. (Photo Inge Van den Bergh) 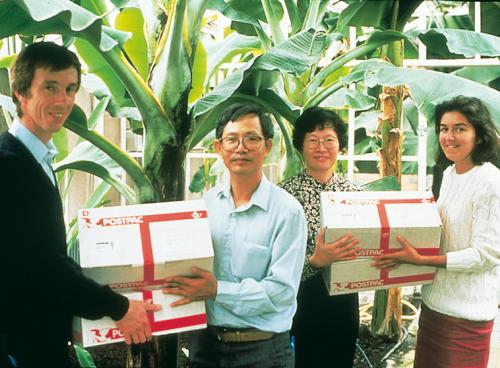 Tissue culture reduces the risk of transmitting pathogens such as bacteria and fungi, but not viruses which, if present, need to be removed before the plantlets can be cleared for distribution. Between 1985 and 2007, the ITC distributed about 10,000 accessions to users in 103 countries. More than 60% of the requests came from users in developing countries. (Photo KULeuven) 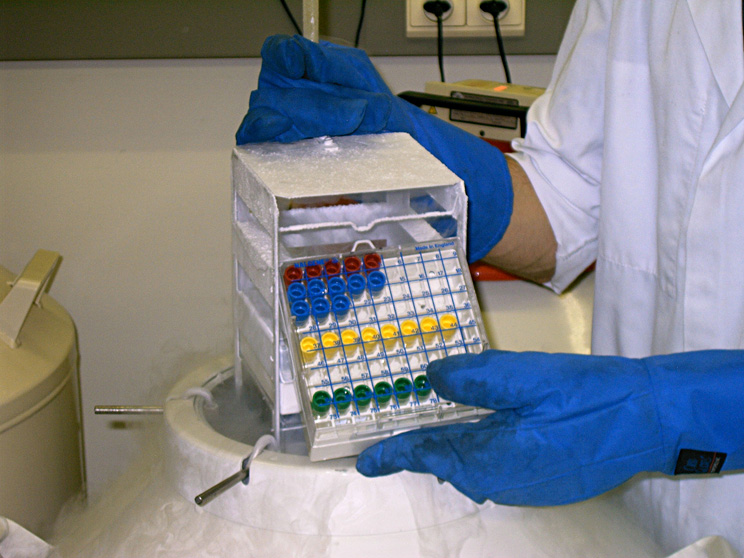 Research carried out at KULeuven has provided an extra level of insurance to the conservation effort by developing methods that allow all kinds of banana to be safely conserved in liquid nitrogen. At these ultra-low temperatures, so-called ‘cryopreservation’ arrests both the growth of plant cells and all processes of biological deterioration, so that the material can be preserved, safely and cost-effectively, and resuscitated into fully viable banana plants. Most of the banana collection has been safely stored away in liquid nitrogen and, as yet further insurance, a duplicate set is kept at a separate location. The expertise developed in the process has led to the recognition of KULeuven as a centre of excellence in cryopreservation. (Photo Bart Panis) 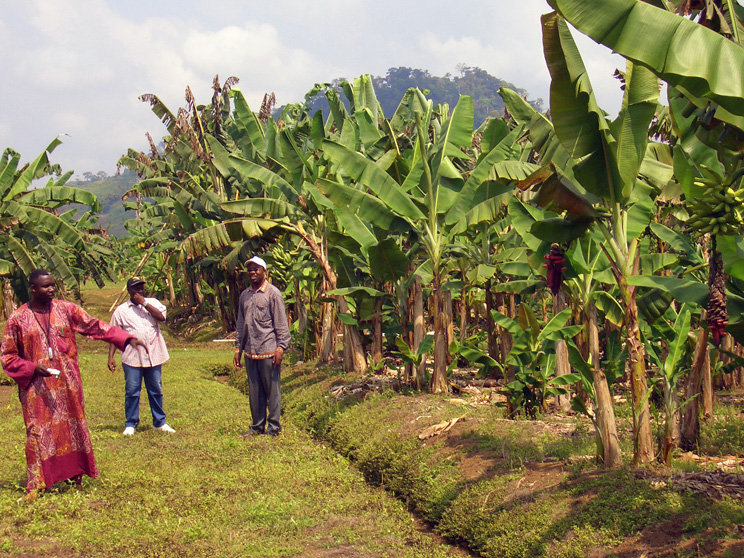 To control for the risks of somaclonal variation, altered characteristics which may appear in plants that have been kept in test tubes for an extended period of time, a programme to rejuvenate the collection was launched in 2001. The plants were grown in greenhouses and ‘decapitated’ to supply suckers. Material derived from these suckers was used to replace the tissue-culture samples and some of it was sent to field collections, such as the one managed by the Centre Africain de Recherche sur Bananiers et Plantains in Cameroon, to verify their trueness to type. (Photo Richard Markham) 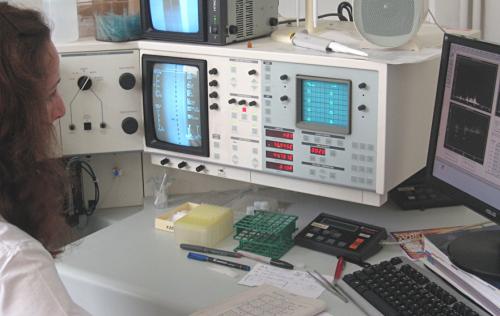 The ITC has also entered into a collaboration with the Institute of Experimental Botany (IEB) in Olomouc, Czech Republic, which, among others, determines the ploidy of every ITC accession using flow cytometry. The IEB is also characterizing molecularly all the plant material acquired by the ITC. (Photo Mathieu Rouard) 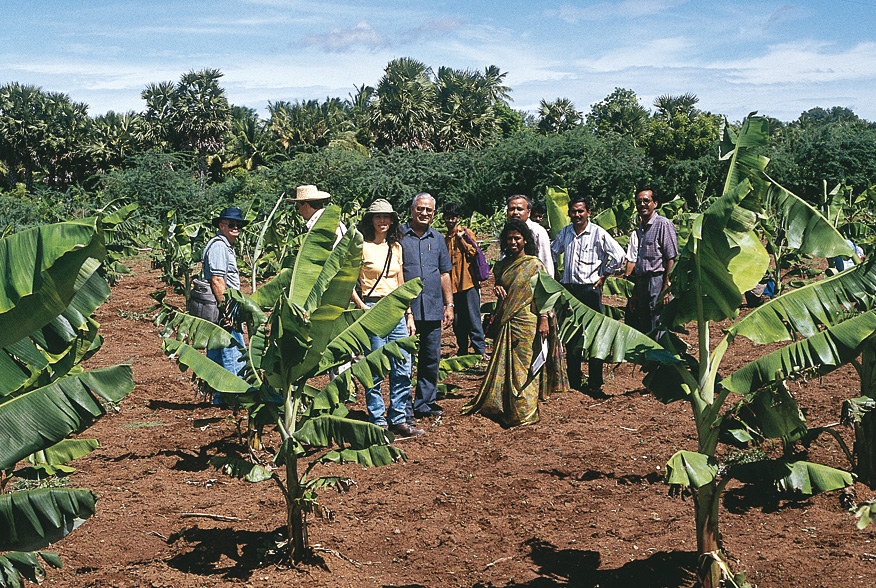 Analysis of the records of the past two decades showed that half of the distributions concerned the supply of samples used for studies and activities that underpin the operations of the genebank. The largest fraction was used in field and laboratory characterization, health testing of the accessions and evaluation in a wide range of growing conditions of the performance of hybrids produced by breeding centres, as part of the International Musa Testing Programme. The other half was supplied on request to scientists for their research, evaluation, conservation and breeding activities. Nearly two thirds of the demands were for cultivars, while improved hybrids accounted for 20% of the distributed materials and wild relatives for 17%. (Photo Gisele Orjeda) 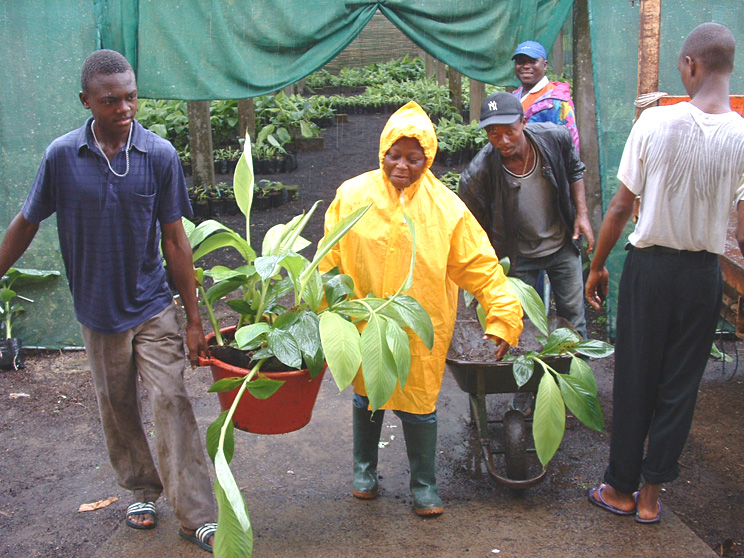 The most frequent use of the ITC material mentioned by key users, contacted as part of the impact assessment study, was the evaluation of agronomic traits, especially disease resistance, and the subsequent distribution of promising cultivars to farmers for local consumption and domestic markets. They also estimate that farmers, especially small-scale farmers are the ultimate beneficiaries of the material distributed by the ITC, along with research institutions. For example, it has been documented that about 0.5 million farmers in the Kagera region of Tanzania benefited from the distribution and multiplication of improved germplasm made available by the ITC. (Photo Bioversity) 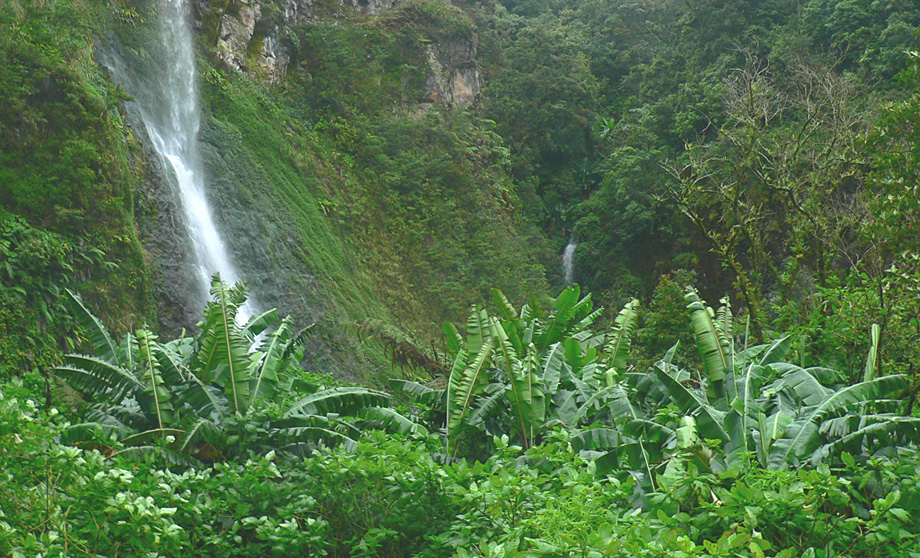 Respondents praised the service provided by the ITC, mainly the safety and reliability of the distributed materials, and the size of the collection. However, several respondents expressed the concern that the collection does not yet comprehensively represent the diversity of bananas and should be expanded in a strategic way, especially with regards to wild Musa species. (Photo Anne Vézina)