While the Svalbard Global Seed Vault celebrates its first anniversary, banana scientists can take comfort in the thought that their favourite crop is also safely backed up, in France.

Unlike crops that produce orthodox seeds, which can be dried and stored at a low temperature without harm, bananas need another solution to the problem of conserving them for an indefinite period of time. The solution, cryopreservation, also relies on a cold temperature, the extremely chilly one of -196 °C, the temperature of liquid nitrogen.

To avoid the formation of ice crystals that would inevitably ensue if pieces of meristematic tissue (the source of the regenerative potential of a plant) were dipped directly in liquid nitrogen, scientists expose them to a vitrification solution high in compounds such as sucrose and glycerol. Osmosis causes some of the water to move out of the cells, dehydrating them without killing them. These vitrified pieces of banana tissues are put into a state of suspended animation in liquid nitrogen and kept in cryotanks at the International Transit Centre (ITC) managed by Bioversity International and hosted by the Katholieke Universiteit Leuven (KULeuven) in Leuven, Belgium. 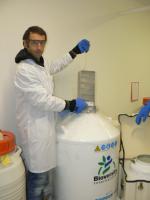 So far, nearly half of the the International Musa Germplasm Collection has been safely stored away in liquid nitrogen. As yet further insurance, should anything happen to the samples in Leuven, duplication is underway at the French Research Institute for Development (IRD) in Montpellier, France, where the entire collection will eventually be duplicated in a 170-litre cryotank. Unless an accession is lost at the ITC1 , the cryotank will remain closed except to check the level of liquid nitrogen. The advantage of cryopreserved plants is that they do not need regular care and, in principle, can be conserved for ever. Started in 2007, the "black box" collection at IRD represents the same kind of safety backup that the Svalbard Global Seed Vault offers for orthodox seeds.


IRD was chosen to house the black box collection because of the expertise of their scientists in cryopreservation. IRD researchers made an important contribution to cryopreservation by working out how many samples of each variety should be conserved, since there is no guarantee that a thawed piece of tissue will regenerate into a fully viable plant. IRD scientists solved that problem by developing a method to calculate the number of samples needed to ensure a 95% probability that at least one of them will produce a plant. The method is based on the survival rate obtained for a given accession, the risk level set by the genebank manager and the interval, if any, at which the plants are scheduled to be regenerated.

Armed with this information scientists at KULeuven, a Global Centre of Excellence on Plant Cryobiology, cryopreserved a batch of accessions three separate times, to minimise the risk that all might be contaminated. One of each repetition has gone to France while the other two remain in Belgium.

1 At the ITC, an accession is a set of tissue-culture plantlets derived from a plant representing a cultivar, wild species or improved material. Each accession has a unique identification number.