Scientists at the University of Nottingham have developed an easy-to-use method to produce briquettes from banana skins, stems and leaves.

A story about a British university student who developed a method to produce briquettes from the parts of the banana plant that farmers usually leave in the fields to rot, struck a cord among readers of the BBC website. The briquettes have been hailed as a simple but efficient way to produce much needed fuel in parts of Africa where firewood is scarce and bananas plentiful. The technique has been tested in Rwanda, where the mean banana consumption is one of the highest in the world at some 200 kg of bananas per person per year. 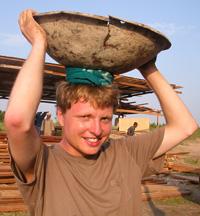 A banana plant produces about 10 times as much vegetative matter as fruits. Researchers have found a way to turn this green bounty into an inexpensive source of fuel. The technique uses minimal tools and technology, and could thus easily be transferred to farm communities in Africa. Joel Chaney, a PhD student at the University of Nottingham, mashed banana skins and leaves and mixed the pulp with sawdust. In banana-producing countries, sun-dried banana stems (or other material like grass or dry leaves) can be used. The pulp mix was then compressed into briquettes using a press, but they can also be formed by hand. The briquettes were baked in an oven at 105ºC, but in Africa they would be left to dry in the sun for a few days.

The briquettes form an ideal fuel, say the scientists, burning with a consistent steady heat suitable for cooking and heating. The briquettes can be used instead of firewood, which is becoming ever-more-scarce in Africa and is very time consuming to collect. To those who wonder about the long-term impact of removing vegetative material that would otherwise replenish the nutrients in the soil, Mike Clifford, an associate professor in the department of engineering at Nottingham, says that it depends on the local situation. “If deforestation is an issue because people need firewood, half of the world population still cooks on wood fires, then briquetting is a good solution. But like so many things, it’s a matter of keeping a balance”.

Watch a video showing how Joel Chaney turns parts of the banana plant into briquettes.