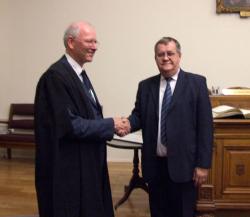 Markku Hakkinen receiving the Linnean Society's HH Bloomer award.
Every year, the Linnean Society of London honours scientists and artists whose work contributed to our knowledge in biological sciences. Last May, the 2009 HH Bloomer award, given to an amateur naturalist, went to Markku Hakkinen, a self-taught botanist who is now considered one of the world’s leading authorities on the taxonomy of Musa.

A former sea captain, Hakkinen embarked on a second career as a banana specialist more than 15 years ago. His years of travelling in remote lands stimulated his interest in natural history and botany, but it is the purchase of a banana plant in his native Finland that sparked his curiosity for this group of tropical plants.

He is currently a research fellow at the University of Helsinki and the Xishuangbanna Tropical Botanical Garden in China. He is also a close collaborator of Bioversity International's banana group. He has conducted many collecting missions in Southeast Asia and published over 55 publications, in addition to identifying and describing many new Musa species. He also consulted herbarium specimens all over the world and reviewed 442 published names in the process of producing a checklist of Musa names.

His standing within the scientific community is now recognised by the collaboration he receives from research organisations in Finland and many other countries. Most recently, he has embarked on research collaborations with molecular scientists which will enable him to further develop and test his ideas and hypotheses.

The Linnean Society of London is the world’s oldest active biological society. Founded in 1788, the Society takes its name from the 18th century Swedish naturalist, Carl Linnaeus who developed the system of binominal nomenclature. The Society is the custodian of Linnaeus’ original library and collections and is creating a digital archive, enabling full global access.