Loading...
In pictures » The Indonesian triangle of banana diversity

The area encompassing Sulawesi, the Maluku Islands and the Lesser Sunda Islands forms a triangle strategically located at the intersection of the geographic distribution of Musa acuminata subspecies whose genetic signature has been found in many cultivated bananas. Its unresolved role in the domestication of bananas and the fact that it has been little explored made it a top priority destination for exploration and collecting for the MusaNet network coordinated by Bioversity International. The plan to pay a visit to the triangle became reality when Bioversity funded two missions as part of the CGIAR Research Program on Roots, Tubers and Bananas.

The core collecting team was made up of scientists from the Indonesian Tropical Fruit Research Institute (ITFRI) - banana taxonomist and breeder Edison Hs and plant pathologist Riska Jumjunidang – and Jeff Daniells, banana taxonomist and principal horticulturist at the Queensland’s Department of Agriculture, Fisheries and Forestry in Australia. ITFRI banana taxonomist Fitriana Nasution accompanied the group during the first mission in October 2012, while Agus Sutanto, the curator of the ITFRI collection in Solok on the island of Sumatra, joined the second one in February-March 2013. Staff from the local offices of the Assessment Institute for Agricultural Technology (AIAT) also joined the group as it travelled through the region. 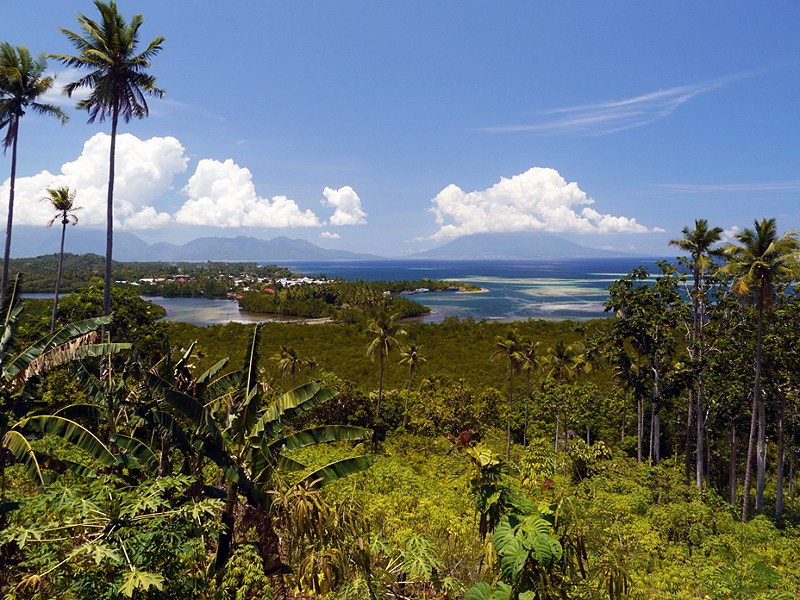 The first collecting mission started in Sulawesi, where the team explored the western coast of the Minahassa Peninsula in the northernmost part of the island. The Musa experts then sampled the islands of Ternate, Tidore and Halmahera in the Maluku Islands. Near Sofifi on the west coast of Halmahera, they took in the view of Tidore and Ternate. (Photo by Jeff Daniells) 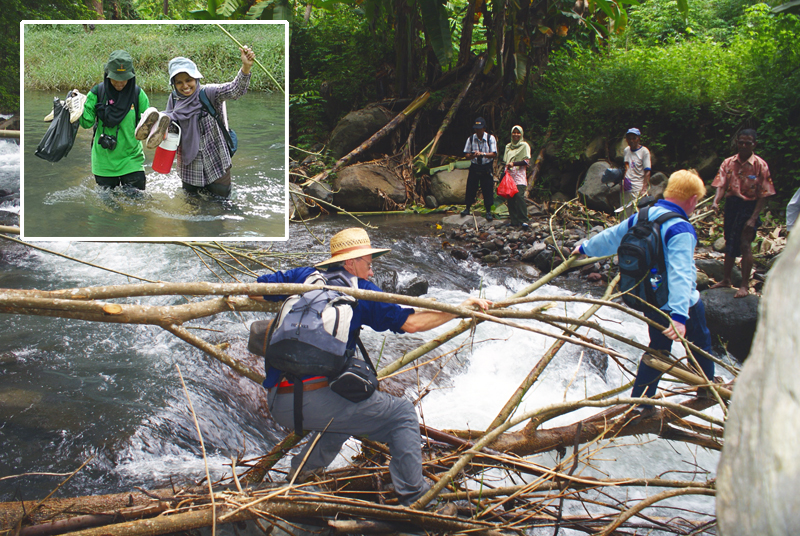 Since wild species of bananas are often found near water, looking for them may involve impromptu river crossings. On the island of Flores the group used a makeshift bridge to cross a creek during the second collecting mission (photo by Agus Sutanto). Inset: Fitriana (left) and Riska crossing a river in northern Sulawesi (photo by Jeff Daniells). 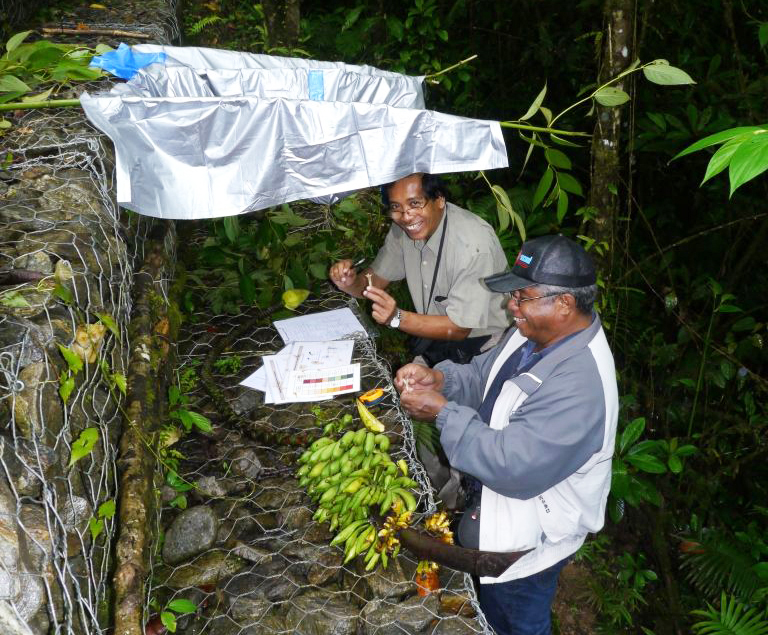 For each accession, the cigar leaf and suckers were collected. The leaf samples were sent to the Musa Genotyping Centre in the Czech Republic, while the suckers were dispatched to the ITFRI collection and to the local AIAT collection (Bioversity’s banana collection at the ITC will also eventually get a copy). The mother plant was also characterized using the descriptors developed by CIRAD and Bioversity. Edison (left) and AIAT staff Alfons Janes Berthy characterizing a 'Musa acuminata' accession under an improvised rain shelter on Seram Island in the Maluku Islands. (Photo by Jeff Daniells) 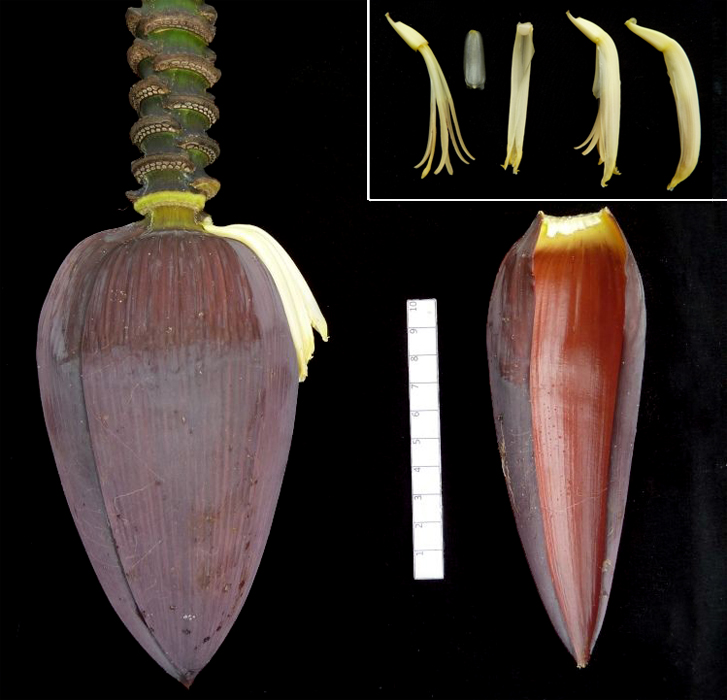 Key parts of the plant, such as the male bud and male flowers of 'Wahtu' (inset), were also photographed according to guidelines developed by MusaNet experts. The morphological characterization will be compared with the plant’s ploidy and DNA profile determined by the Musa Genotyping Centre. The banana plants that were not collected were also photographed and will be included in a series of guides being prepared. (Photos by Jeff Daniells) 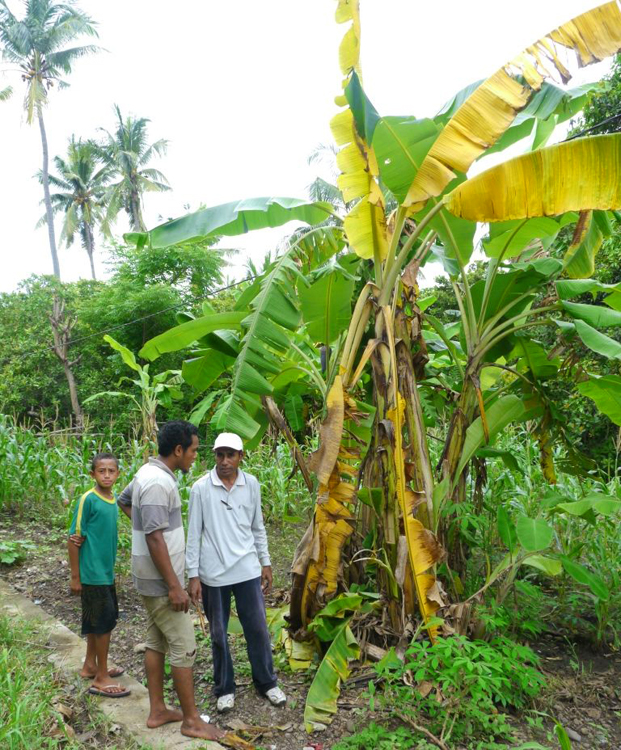 The collecting team also included a plant pathologist to sample plants for pathogens. Plants displaying symptoms of Fusarium wilt, like this Silk banana seen on the island of Flores in the Lesser Sunda Islands, were sampled. The vegetative compatibility groups of the isolates are being determined at ITFRI’s lab in Solok. (Photo by Jeff Daniells) 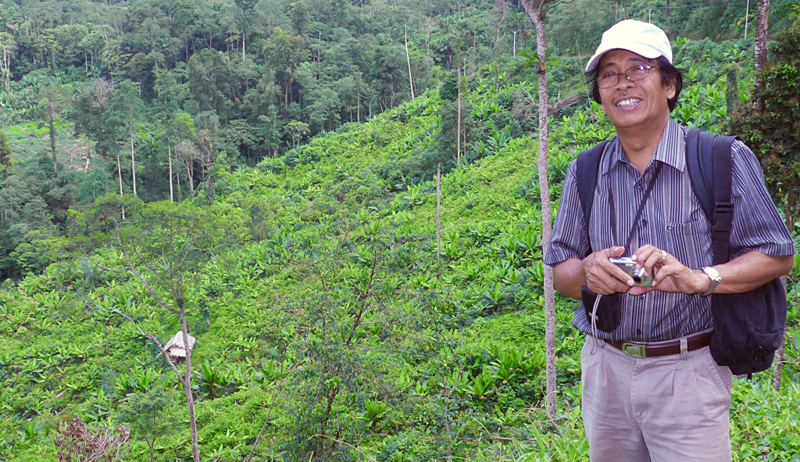 Wild bananas are usually the first plants to emerge after trees are felled in the tropical forest. This patch of cleared forest, near Kotomobagu in northern Sulawesi, is covered with 'Musa acuminata' ssp. 'tomentosa', a subspecies described by the late Indonesian taxonomist Rusdy Nasution. (Photo by Jeff Daniells)

Although Fe’i bananas were domesticated in the western Pacific, the taxonomy experts were wondering whether any would be seen in the triangle. The collecting team did not see any during the first mission, but during the second one they collected Tongka Langit on Seram Island. (Photos by Jeff Daniells (right) and by Yusril (left). 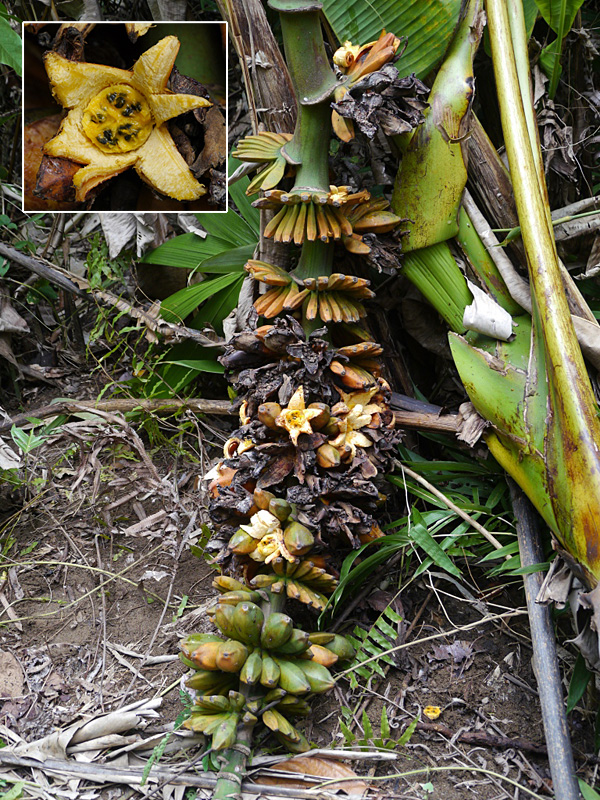 'Musa lolodensis' is one of six species with self-peeling fruit that make it easier for animals to disseminate the seeds (inset). The species is named after the Loloda river on the banks of which it was first collected during a 1940 expedition to Halmahera Island. The species belongs to the Australimusa section from which Fe’i bananas were domesticated. (Photos by Jeff Daniells) 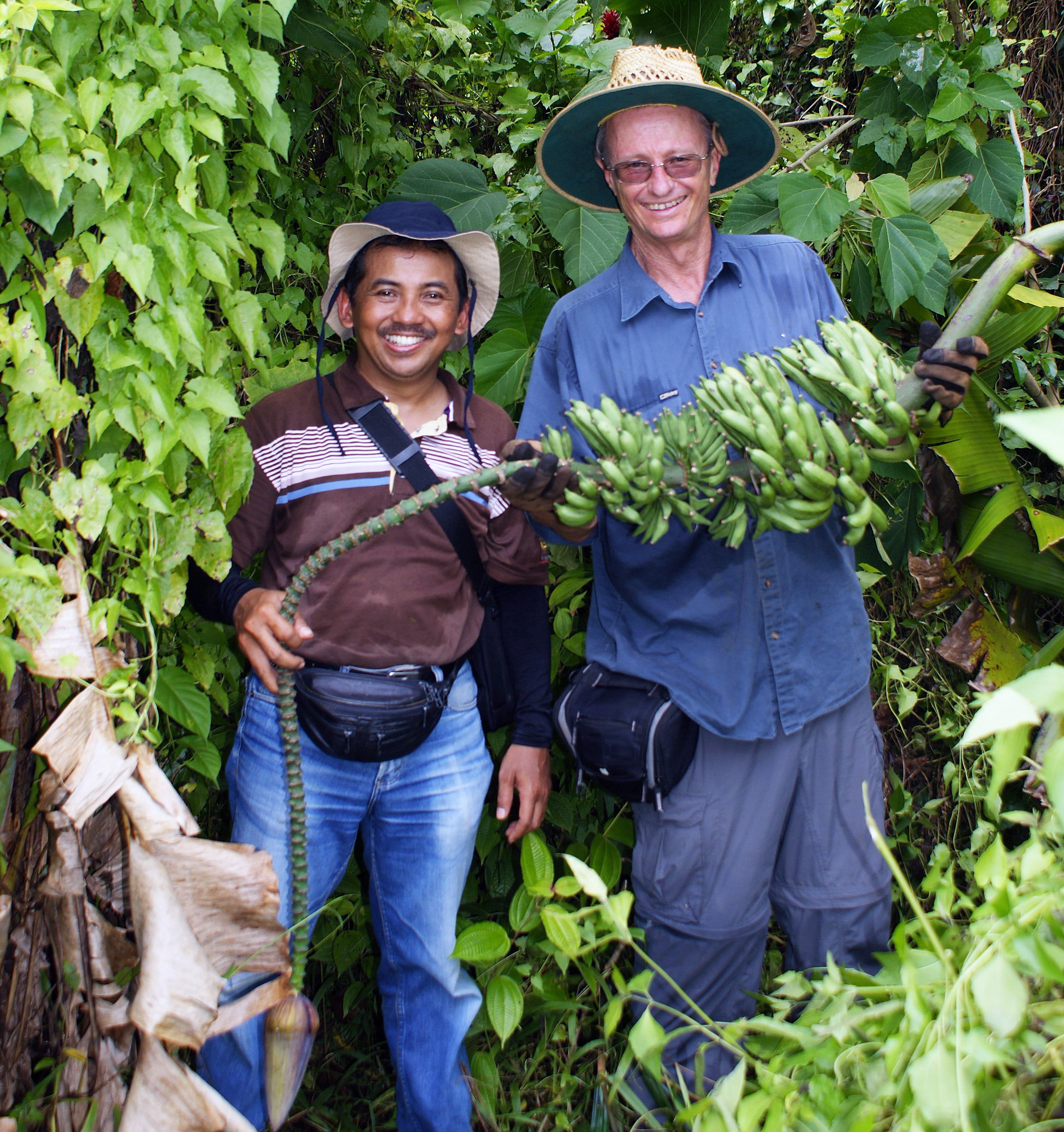 Agus Sutanto (left) and Jeff Daniells holding the bunch of a subspecies of 'Musa acuminata' which they collected on Seram Island. They tentatively classified it as 'microcarpa'. The curator of the ITFRI field collection and the Australian horticultural scientist have several collecting missions under their belt. Sutanto has collected throughout Indonesia, while Daniells has travelled extensively in the Pacific region, including a series of expeditions in Papua New Guinea. (Photo by Edison Hs)