Sophie Spillemaeckers and Ludovic Schweitzer, the environmentally conscious founders of Concrete Dreams, spent a month in Rwanda and the South Kivu province of the Democratic Republic of Congo (DR Congo) shooting videos on marketing, nutritional and crop management issues thanks to a grant from the Flemish Interuniversity Council to KU Leuven. The videos are part of a multilingual series of training videos for Africa produced for CIALCA, a partnership of three CGIAR centres trying to improve the lives of the region’s smallholder farmers. The videos are available for download here (under new films), along with an earlier series of CIALCA videos remastered by Concrete Dreams. They are also accessible for viewing on the CIALCA YouTube channel. (Photos by Concrete Dreams) 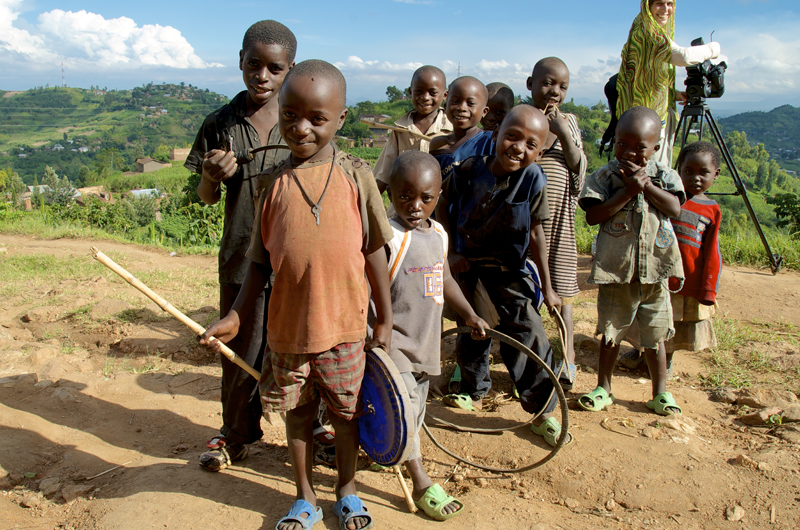 The assignment was Sophie Spillemaeckers’ second visit to DR Congo. After studies in Visual Anthropology (the production of ethnographic visual material) she did field work among the Bashi people near Bukavu. She also worked as an environmental consultant and researcher on sustainable development before going back to filmmaking in 2010. 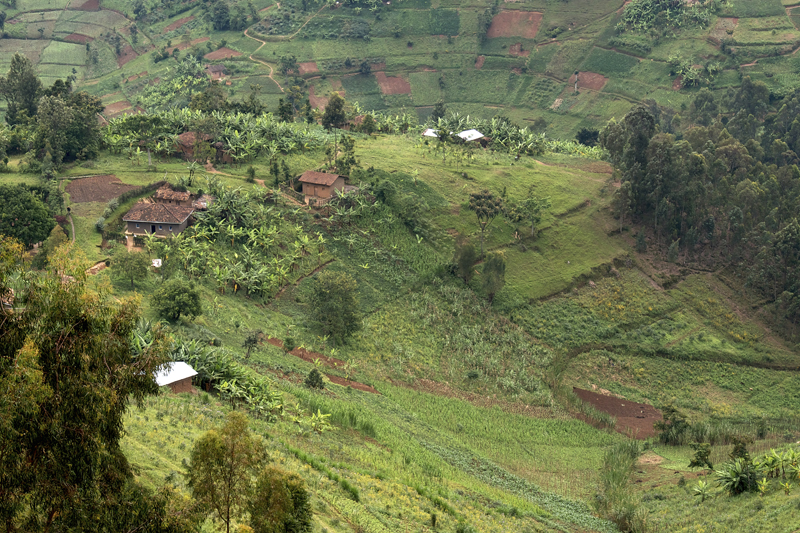 In the Great Lakes region of East Africa, bananas are an important crop for smallholder farmers, especially beer and cooking bananas. The most common cultivars belong to a group of locally domesticated bananas that are well adapted to altitude and aptly named East African highland bananas. Another African staple, Plantains, are mostly grown in the lowlands. 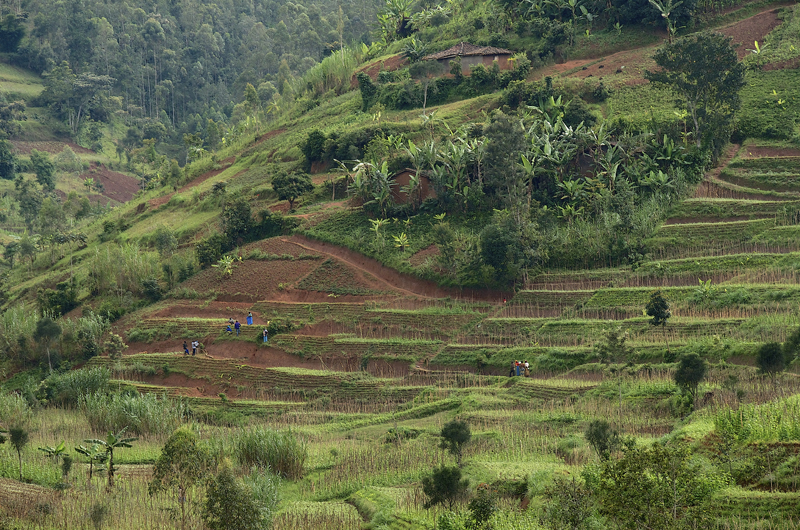 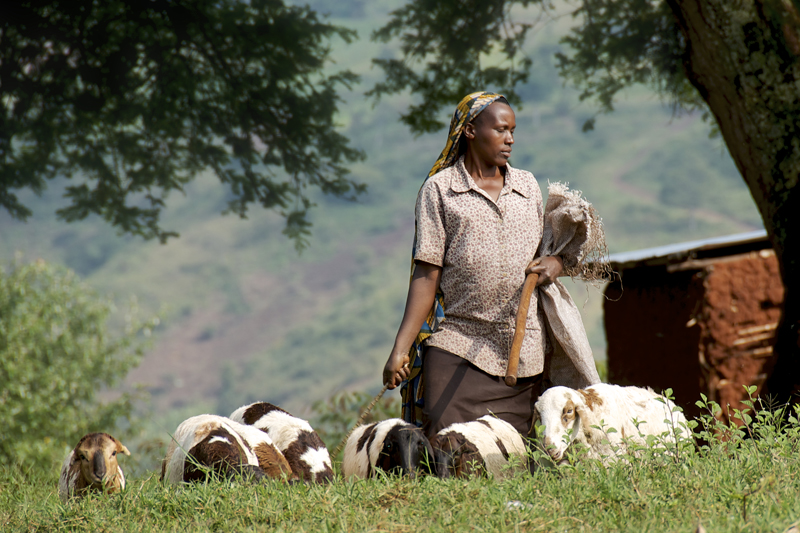 Rwanda has one of the lowest per capita consumption of milk among developing countries. However, this is changing as more and more livestock is imported. Farmers also have a readily available food for their goats in the form of banana leaves. 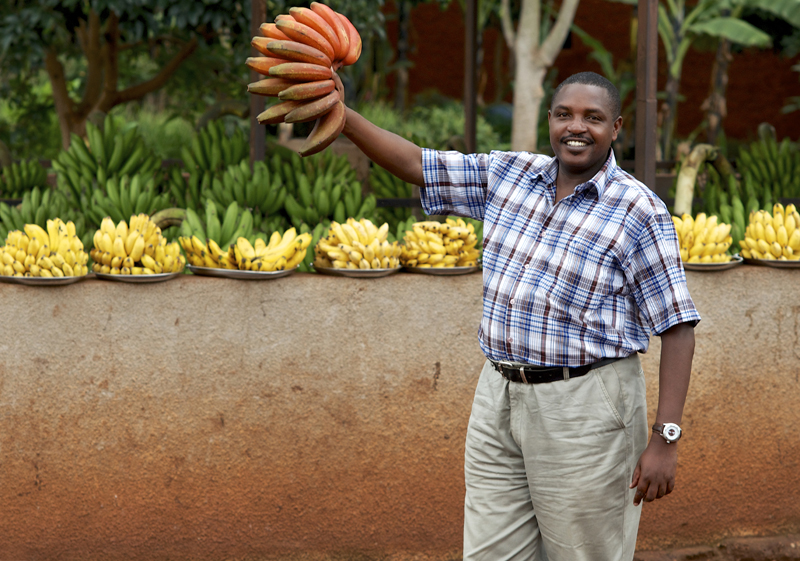 CIALCA's Thierry Mugiraneza is holding up a hand of the cultivar ‘Red banana’. In Rwanda the Swahili word for this sweet banana is ‘Gisukari’. The yellow banana behind him is ‘Kamaramasenge’, which belongs to the same group as the ‘Sukari Ndiizi’ in Uganda. The green bunches are East African highland bananas. 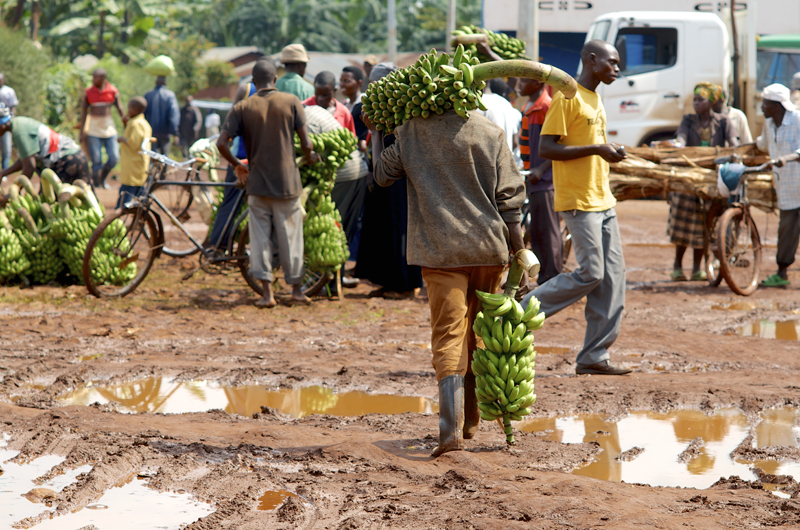 Farmers in the region have small plots and few resources to grow crops. Even though their harvest is usually small, they need to sell part of it to pay for school fees or medical care. However, the prices they get on the local markets are often low, especially if they are trying to sell the same produce at the same time. Getting paid by the bunch, instead of kilos, also contributes to the problem. 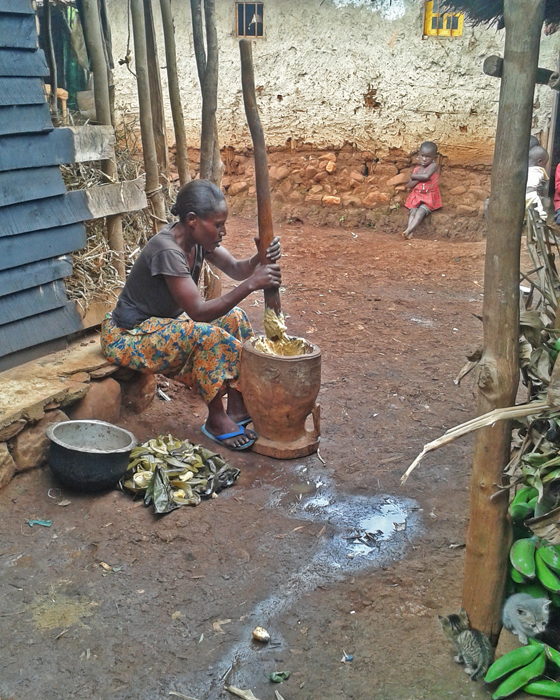 Malnutrition is a serious problem in the region. Most households have very little to eat, and what is available is often not diversified enough to meet nutrient needs. In the photo, a Congolese woman is pounding boiled bananas, to which she will add boiling water and cassava flour. The ingredients are stirred into a paste called Ugali. The dish is often accompanied by a relish made from cassava leaves. (Photo by B. Ekesa, Bioversity International) 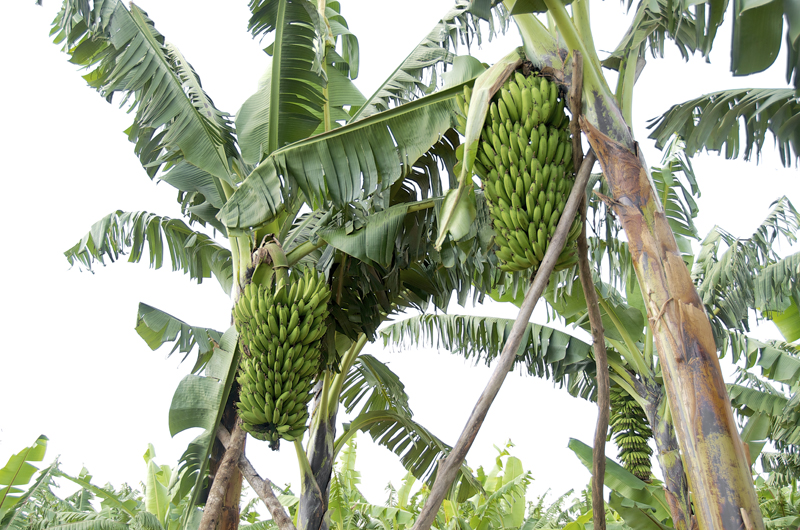 In Kiramuruzi, Rwanda, the film crew met a farmer who grows only one type of East African highland banana, ‘Mpologoma’.” He likes the large bunches and the plant’s relatively short stature, which makes it less susceptible to wind. But while ‘Mpologoma’ is also a favourite of many farmers, it is, like most bananas, susceptible to various pests and diseases. 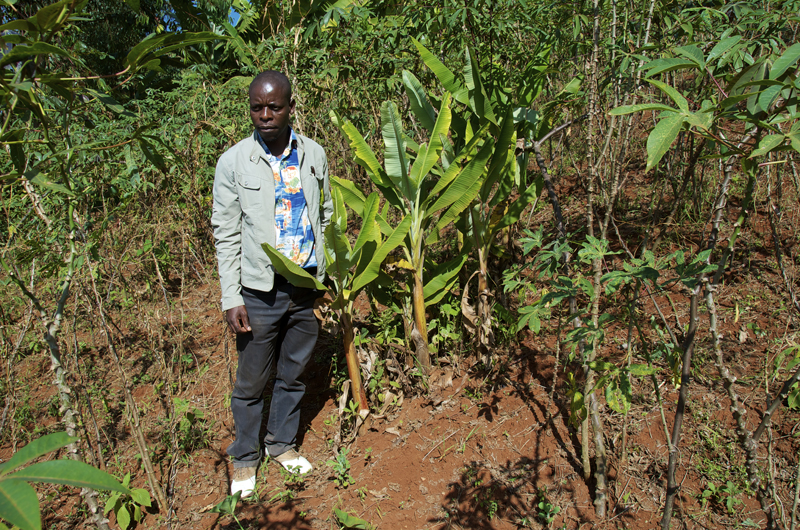 Two diseases are especially dreaded for their severity and the fact that so far no resistant cultivars have been found for either of them. One of the diseases is bunchy top. Caused by a virus, it dramatically stunts the plant. 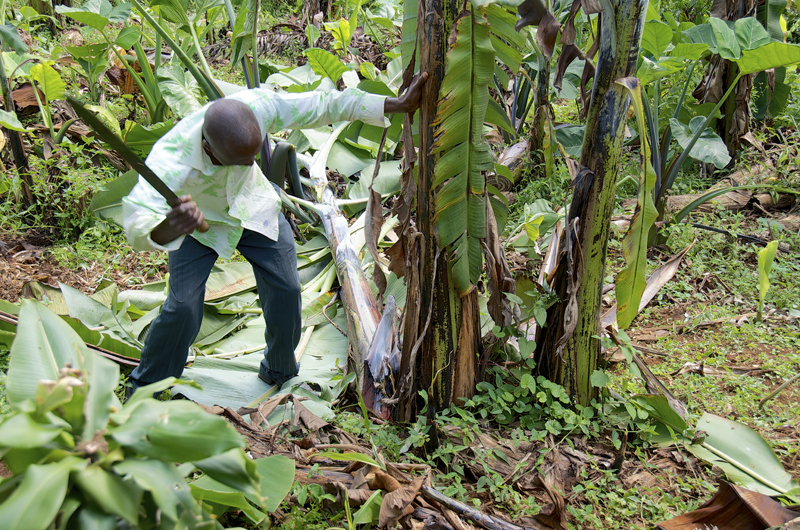 The other disease, Xanthomonas wilt, commonly known as BXW, is caused by a bacterium that started spreading through eastern and central Africa 12 years ago. Even though the disease is deadly, a package of cultural practices can prevent the transmission of the disease and stop its spread. 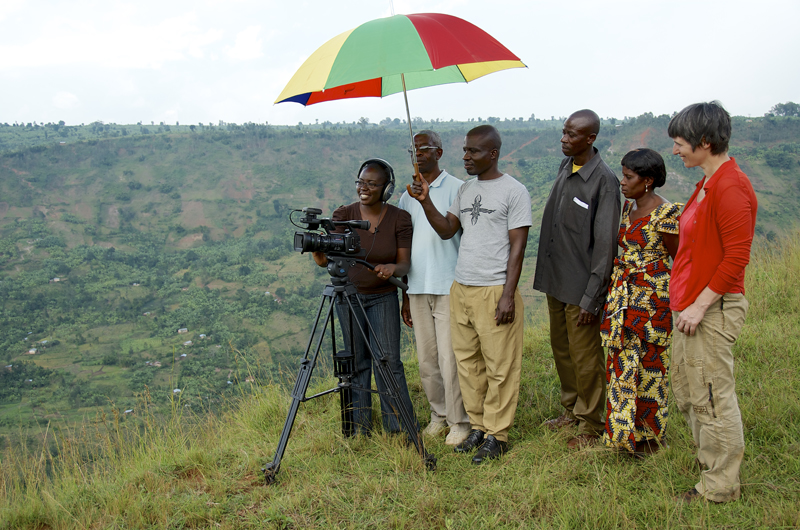 Most of the local informants featured in the videos had never participated in a film before. To put them at ease, the filmmakers would start each new film by discussing the scenario with the participants. Some of them even got to try their hand at filming.