Loading...
News and analysis » Xanthomonas wilt gets the sequencing treatment

Taking advantage of the technological developments that make sequencing genomes increasingly affordable, scientists compared the genome of the causal agent of Xanthomonas wilt with the one of a closely related strain. 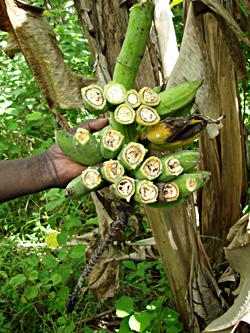 Guy Blomme
Xanthomonas wilt is a devastating bacterial disease that causes the fruit to ripen prematurely and rot. It used to be known only in Ethiopia, where it infects both bananas and the related enset, until it was observed in Uganda in 2001 and spread to neighbouring countries. Within a few years, a pest risk analysis had been developed to help policy makers in affected and at-risk countries.


The causal agent was classified as Xanthomonas campestris pathovar musacearum (Xcm) in the 1970s but molecular analyses have since revealed that the bacterium is more closely related to the species Xanthomonas vasicola. Scientists have argued that it should be considered as a new pathovar of that species, along with the pathovar holcicola (Xvh), which is pathogenic to sorghum, and pathovar vasculorum (Xvv), which is pathogenic to sugarcane and maize, but more pathogenicity studies are required to substantiate pathovar descriptions, explains Julian Smith of the Food and Environment Research Agency in the UK. Preliminary studies, however, indicate that neither Xvh nor Xvv are pathogenic on banana, while Xcm is pathogenic on both banana and maize, suggesting that a Xvv strain may have made the jump to a new banana host.

To better understand, and eventually control these closely related diseases, scientists from the UK and Uganda sequenced their genomes using the ‘Next Generation’ Illumina Solexa GA technology. They used a strain isolated from banana in Uganda in 2005, Xcm 4381, and a strain isolated from sugarcane in Zimbabwe in 1959, Xvv 702. Since several members of the genus had previously been sequenced, the authors of the study published in Microbiology Letters were able to compare these genomes with the published genomes of other Xanthomonas species.

The draft genome indicates that Xvv 702 has more bases (5,475,474 kb) than Xcm 4381 (4,789,105 kb). When their genes were compared, the genes common to both strains represented 96% of the Xcm 4381 genome and 92% of the Xvv 702 genome. But the scientists were more interested in the differences between the strains than in their similarities. Xcm 4381, for example, encodes for cysteine proteases that are absent in Xvv 702. These effectors, proteins produced by the pathogen that enable infection by acting on the host’s defence mechanisms, may have been instrumental in the adaptation of Xcm 4381 to its banana host. As with similar projects on other species, the hope is that the knowledge generated by genome sequencing will translate into practical applications.