Cavendish bananas that have been genetically engineered to outsmart the causal agent of Fusarium wilt will be tested in field trials in Australia.
The site, a 1.6-hectare field near Darwin in Australia’s Northern Territory, has been prepared for the arrival in April of genetically modified Cavendish bananas. Once the home of a thriving banana industry, away from the path of the cyclones that periodically bring down plantations in northern Queensland, the region’s growers started turning their back on bananas after the arrival of tropical race 4 (TR4), which causes Fusarium wilt in Cavendish varieties. 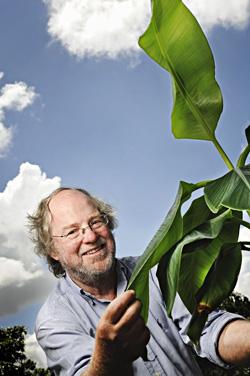 The bananas have all but disappeared, but not the soil-borne fungus, Fusarium oxysporum f. sp. cubense, which will put to the test plants genetically modified in James Dale’s lab at the Queensland University of Technology (QUT) in Brisbane.

The genetic engineering strategy used is based on a new understanding of how the fungus operates. Instead of overwhelming the plant with an arsenal of toxins, evidence suggests that the fungus tricks the plant into killing its cells by triggering the natural process of programmed cell death, which eliminates unwanted, damaged or used cells. The decaying plant tissues are then used by the fungus as a food source.

To make the plant resistant to the disease, the scientists inserted a gene that prevents the fungus from co-opting the plant’s cell death pathways. Deprived of food, the fungus eventually stops growing and fails to colonize and infect the tissues of the transgenic plant. Dale and his team tested genes from various organisms to find the one that performed best under lab conditions, which is a gene from the thale cress, Arabidopsis thaliana.

The proof-of-concept experiments were done on Lady Finger bananas using a race 1 strain, since the scientists were not allowed to bring TR4 into their lab and Cavendish bananas are resistant to race 1. The QUT scientists expect the same strategy to work regardless of the strain, although the specific gene to insert in the plant may differ, adds Dale. For the field trial, three varieties of Cavendish bananas have been transformed: Grande Naine, Williams and Dwarf Cavendish.

The field trial is funded by the Australian Research Council and a banana grower group. But even if the results confirm that the plants are resistant to TR4, it would be years before genetically modified bananas are available commercially. Australian law also requires that GM foods be labeled as such. Currently, Australians are only exposed to GM products (mainly soybean, canola, corn and potato) through their consumption of processed foods. No GM fruits or vegetables have yet been approved, making it impossible to predict how Australian consumers would react to a GM banana.

What about you? Would you eat GM bananas? Compare your answer to the results of our poll. 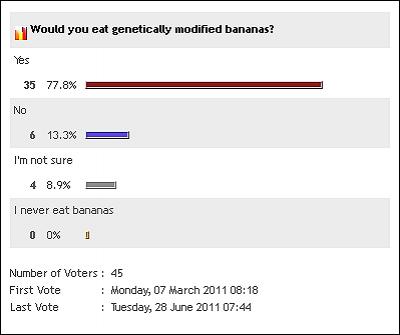