Loading...
Under the peel » Crocs and banana plantations: What the media missed 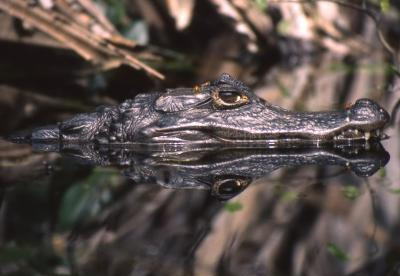 A number of news outlets picked up the press release sent by Wiley, Yellow peril:  Are banana farms contaminating Costa Rica's crocs?. The question mark in the title must be rhetorical. The press release leaves little doubt that readers are expected to agree with the conclusion of a study calling for banana plantations in Costa Rica to be better regulated because caimans from the Tortuguero area on the Atlantic coast “had been exposed to pesticides from upstream banana plantations”.  Sure enough, all the news pieces I saw reported the story uncritically. The Guardian went as far as saying that the study had “established that run-off from banana plantations is harming the caimans that glide stealthily through Costa Rica’s conserved waters.“

The first thing that caught my attention was the type of pesticides detected in the caimans: 7 organochlorine insecticides and 2 pyrethroid insecticides. Organochlorines are pesticides like DDT, banned chemicals that are known to persist in the environment and accumulate in the food chain. I had never come across them in relation to bananas, except for chlordecone, but it was not one of the 7. Moreover, while it’s true that the banana industry in Costa Rica is a heavy consumer of pesticides, the intensive spraying regimen for which it is known uses fungicides, not insecticides, to control the fungal disease black leaf streak.

Curious to see how the scientists had come to their conclusion, I went to the paper. The scientists live-captured 14 caimans on which they took a series of morphometric measures and from which they drew 30 ml of blood that was later analysed for the presence of 70 pesticides. Nine pesticides were detected (dieldrin, permethrin, mirex, 4,40-DDE, alpha-endosulfan, heptachlor epoxide, oxychlordane, heptachlor and cypermethrin). For the data analysis, the caimans were classified into two groups: near-field and reference (N and R on the map of the study area). The near-field caimans were the 6 individuals captured along the Rio Suerte, which is considered to be under the influence of banana plantations. The reference caimans were the 8 individuals captured in areas considered to be outside the influence of banana plantations.

The average pesticide burden in the 6 near-field caimans was significantly higher than in the 8 reference ones (6.03±3.43 ng/g lipid to 1.30±0.41 ng/g lipid), but where it gets interesting is when the scientists do a Principal components analysis (PCA) to eliminate the effect of concentration. This leads them to remove the pyrethroid insecticide cypermethrin from the analysis because it was found in only one caiman (R7 on the map). The authors also say that the presence of the insecticide in that caiman was explained by its use to control termites at a biological station and lodge close to where the caiman was sampled.

The PCA further reveals that dieldrin and mirex do not cluster with the remaining pesticides, which means that 5 organochlorines and 1 pyrethroid cannot be attributed to banana plantations since their levels in the near-field caimans are similar to the levels in the reference ones. In the end, the scientists’ case against the banana plantations rests essentially on the higher levels of dieldrin and mirex measured in 4 of the 6 near-field caimans. This result, the authors say, “can only be explained by local upstream use of these 2 pesticides, which most likely is taking place at banana plantations”.

When I asked two of the authors whether they knew how these pesticides were being used in banana plantations, Peter Ross replied that “it is not easy to determine who is applying what as corporations do not release this information. All we can do is to document what we see, and then others can ask the industry if this comes from their activities.” Since the journalists hadn’t done it, I contacted representatives of the industry to ask them whether any of the 9 pesticides were used in banana production when the caimans were sampled in 2006. Sylvain Cuperlier, Dole’s VP of Corporate Responsibility and Sustainability, said that none of the 9 pesticides are used in banana production because the 7 organochlorine insecticides are banned and the 2 pyrethroid insecticides are not registered for use on bananas in Costa Rica. I also checked with Ronald Romero, Chiquita’s director of R&D, who happens to be based in Costa Rica. He also said that Chiquita was not using any of the 9 pesticides, then and now. 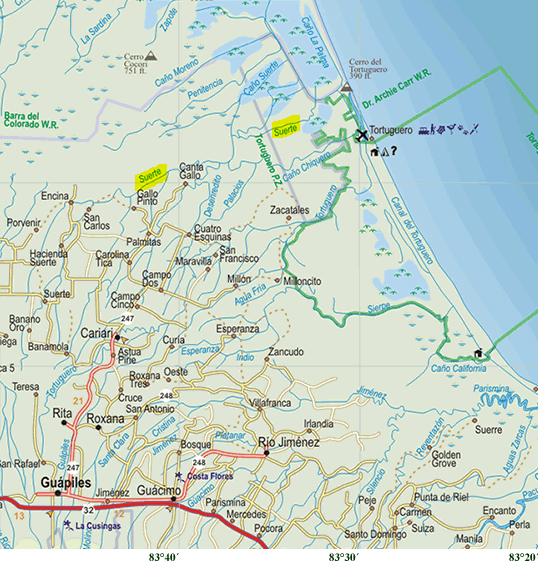 When I asked the authors of the study why they had not considered other sources for the contaminants, Ross replied that although he had not participated in the field work, his understanding was that agriculture outside Tortuguero “is limited to banana”.  Well, not really. I happened to travel through the area from Tortuguero this summer.  Banana plantations were not the only agricultural activity happening. And as the map of the area shows, the Rio Suerte and its tributaries drain an area covered by a relatively dense network of roads and settlements that could be sources of pesticides, as was the case for cypermethrin. For example, dieldrin is known to have been used to control mosquitoes, and mirex to control ants or cockroaches, among others.

I also asked Romero whether any of the 61 pesticides not detected in caimans were used in banana production in 2006. He mentioned two:  the organophosphate insecticide chlorpyrifos, which many companies, including Chiquita, are now phasing out, and the nematicide terbufos, which may be used once a year, or some years not at all.

It’s unfortunate that the pesticides analysed in the study did not include more of the fungicides and other pesticides actually used in banana production, given the importance of getting a handle on their impact on the environment. Maybe readers can point to recent studies that have done it, but if knowing which pesticides to sample in future studies is an obstacle, Romero recommends approaching banana companies. He is confident they would respond, if only “because the use of pesticides on fruits is monitored and verified by third party certification agencies.” He also suggests contacting “CORBANA, a public organization that knows very well what is permitted and what is actually being used.” Apparently, banana production in Costa Rica is not operating in the regulatory vacuum decried by the authors of the study.

I am aware that by speaking out against this study I risk coming across as an apologist for monocultures and heavy pesticide use. I am not. I did this post mainly to underscore the importance of basing recommendations on solid scientific evidence. Similarly, some of the people who commented on the NPR website rightly blame monocultures for pesticide use. However, their solution to avoid pesticides — which is to grow the Cavendish cultivars that dominate the export trade mixed with other crops or other banana cultivars — is probably better adapted to smallholder farmers than to the banana industry, which faces different challenges.

That is not to say that there is nothing the banana industry can do to reduce pesticides in plantations. The Musapedia portal on pesticide-reducing practices has started documenting some of them. Moreover, according to CORBANA, the use of pesticides, mostly herbicides, has been reduced by nearly 19% since 2007. Fungicides, however, are not easily dispensed with in wet Costa Rica. The problem is not that the fungus responsible for black leaf streak kills banana plants outright, as the NPR article says. It doesn’t. The problem for the export industry is that it shortens the fruit's green life, the time between harvest and ripening. When the fungus is not strictly controlled, the harvested fruits cannot withstand the trip to banana-importing countries.

Having said that, there could be a way to grow pesticide-free bananas for export in the humid tropics, except that most consumers don’t want to hear about it. But that's another post.