Black leaf streak at a glance Black leaf streak disease (BLSD), which is commonly known as black Sigatoka, is a leaf spot disease caused by the fungus Pseudocercospora fijiensis, formerly known as Mycosphaerella fijiensis1 . The disease does not immediately kill banana plants, but by interfering with photosynthesis it can negatively impact bunch weight. Under favourable conditions for the fungus, and without chemical control, no functional leaf might be left at harvest and as a result yields can be reduced by 35 to 50%. BLSD also shortens the fruit's green life, the time between harvest and ripening. Fruits harvested from heavily infected plants ripen prematurely and unevenly, and as a result become unsuitable for export.

The need to control the fungus to a level that does not affect the export of the fruit makes it the most economically important leaf disease of banana. In commercial plantations of Cavendish and Plantain cultivars, the disease is mainly controlled through the application of fungicides, whose application may be as frequent as once a week.

The disease has been reported in most countries is which banana is grown. It was first reported in 1963, in Fiji's Sigatoka valley, after which black Sigatoka gets its name. The fungus that causes the disease is however believed to have been widespread in the Asia-Pacific region long before then2 . It has been recorded in American Samoa, Australia (Torres Strait and Cape York Peninsula), the Cook Islands, Fiji, French Polynesia, Hawaii (USA), Micronesia, New Caledonia, Niue, Norfolk Island, Papua New Guinea, the Solomon Islands, Tonga, Vanuatu, Wallis and Fortuna Islands and Samoa.

There are indications that it might have been in Taiwan as early as 19272 . The disease has since been found in Bhutan, China (Hainan, Guangdong and Yunnan), Indonesia (Halmahera, Java, Kalimantan and Sumatra), Malaysia (Johore, Langkawi Island and Sarawak), the Philippines, Singapore, Taiwan, Thailand and Vietnam. However, the situation is more confused in this region because Pseudocercospora fijiensis is not common at all locations.

The earliest report of BLSD in Africa is from Zambia in 19733 . However, the fungus could not identified and there is still no official confirmation of the disease in Zambia. The first authenticated report is from Gabon in 1980. Other West African countries with the disease are Benin, Cameroon, the Central African Republic, Congo, Côte d'Ivoire, the Democratic Republic of Congo, Ghana, Nigeria, S¦o Tomé and Togo. In the East African region, black leaf streak has been found in Burundi, Comoros, Kenya, Madagascar, Malawi, Mayotte, Rwanda, Tanzania (including Zanzibar) and Uganda. 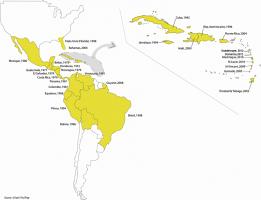 Most infections start on the underside of the leaf during the unfurling of the cigar leaf. The symptoms start as small specks that become streaks running parallel to the leaf veins. These streaks aggregate and eventually form spots that coalesce, form a chlorotic halo, and eventually merge to cause extensive necrosis. The first symptom, chlorotic specks, appears 14 to 20 days after infection. The period between the specks and the appearance of streaks, and eventually necrotic spots, varies according to the cultivar and the severity of infection.

The first detailed description of symptoms into six stages was done by Meredith and Lawrence in 19698 . The six stages were redefined by Eric Fouré in 19879 . (Photos by R. Le Guen, CIRAD) 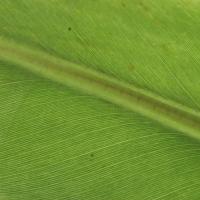 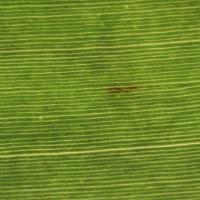 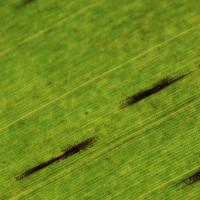 Stage 3 differs from the previous one by the dimensions of the streaks, which become longer and larger. 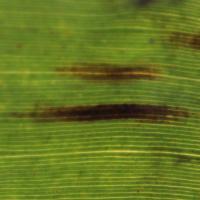 Stage 4 appears as a brown spot on the underside of the leaf and as a black spot on the upper side. The spot takes an elliptical or circular form. 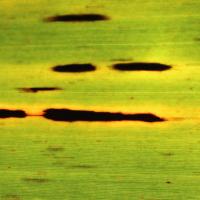 Stage 5 is the first of two necrotic stages. The spot is totally black and has spread to the underside of the leaf blade. It is surrounded by a yellow halo. 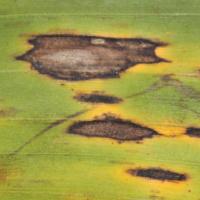 Stage 6 is when the centre of the spot dries out, turns light gray and is surrounded by a well-defined black ring, which is itself surrounded by a bright yellow halo. Since the ring persists, these spots remain visible after the leaf has dried out.

High levels of BLSD severity have been shown to increase susceptibility to crown rot disease10 .

The youngest leaf spotted (YLS) is the youngest leaf with at least 10 necrotic lesions, according to the method developed by Stover11 ; with counting done from the last leave to emerge, number 1. Monitoring the evolution of this parameter from the establishment of a plot of 10 homogenous plants to their flowering (and replacing them with 10 new plants before flowering) can be used to evaluate the effectiveness of a chemical control strategy12 . If none of the leaves on a given plant have necrotic lesions, the value of YLS is N+1, where N is the number of functional leaves. If the YLS decreases over time, the chemical control strategy is failing because it means that the formation of necrotic lesions is faster than the rate at which new leaves are emitted. An increasing YLS suggests that the chemical strategy is effective in slowing down the formation of necrotic lesions.

The management of BLSD aims at conserving a minimum number of functional leaves until harvest to ensure normal growth and fruit quality. In commercial plantations of Cavendish and Plantain cultivars, the disease is controlled through a combination of cultural practices, such as deleafing, and the application of fungicides, which are only effective on the pre-necrotic stages of the disease. Resistant cultivars have also been produced by breeding centres such as FHIA, and introduced to farmers, but no synthetic hybrid has yet been adopted by the export trade. Plant nutrition, water management and plant density are also part of an integrated approach to managing the disease.

The methods used to control BLSD have been informed by the experience controling Sigatoka leaf spot disease in Latin America and the Caribbean, starting with the ground spraying of Bordeaux mixture (suspension of copper sulphate, hydrated lime and water) in the 1930s. The volumes applied decreased with the development of better spraying equipment but it became apparent that the rate at which leafs are emitted would impose a large number of applications to ensure that each new leaf is protected. In the 1950s, mineral oils were found to be excellent vehicles, either alone or mixed with water, for the contact fungicides that were starting to be used. Aerial spraying was also made possible by the change to oil. Mineral oilsnot only enhance the penetration of fungicides in the leaves, they also reduce leaching from rain. However, the accumulation of oil on the leaves interferes with gas exchange, and therefore photosynthesis. Moreover, under hot and dry conditions, the use of oil can be toxic to the plant, which shows up as water-soaked streaks on the leaves13 .

The first systemic fungicide, a Benzimidazole, was used in the early 1970s. Systemic fungicides provide better control than contact fungicides. On the other hand, disease management strategies that rely heavily upon them often lead to the selection of resistant fungal strains. The development of fungicide resistance has led to an increase in the number of fungicide applications. In Costa Rica, for example, some 30 applications a year were the norm in the 1990s, compared to more than 50 in 200712 . Growers caught in a strategy of systematic control to keep the disease in check manage fungicide resistance by alternating between contact and systemic fungicides.

In regions where disease pressure is low and fungicide resistance has not been observed, it is possible to time the application of systemic fungicides when they are needed by using a biological forecasting system which is based on a standardized set of criteria that take into account the development of the fungus and the growth of the plant, both of which are climate driven. However, since systemic fungicides do not remove the disease from spotted leaves, the diseased parts of the leaves should be mechanically removed. Deleafing should be done regularly, taking into account that beyond a certain level it could affect bunch size.