When the founders of EARTH University bought the land on which to build a campus, the property included a commercial banana farm. At the time – the late 1980s – the reputation of banana plantations regarding worker conditions and environmental stewardship was at a low point. The university was advised to get rid of the farm, but decided to keep it to show that it was possible to produce a more ecologically friendly banana in Costa Rica’s humid Caribbean lowlands and still be economically viable. Over the next 25 years, faculty, staff and students have experimented with various approaches to reduce chemi­cal use and improve soil fertility that were implemented whenever possible. In 2007, the farm was only breaking even when the US grocery store Whole Foods Market started buying its bananas, paying above market price for the certified fruit. The profits from the sales of EARTH bananas help support the scholarship fund and university operations. The university is also impacting the banana industry around the world as alumni take what they learned about sustainable agriculture and business management back to their home countries. 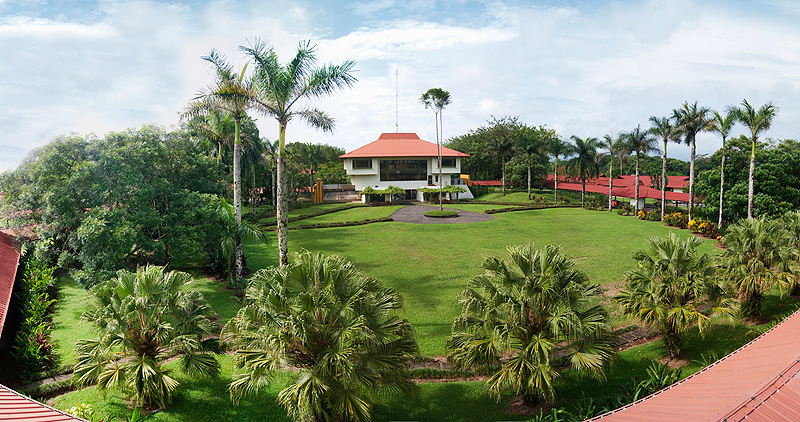 In addition to the banana farm, the 3,375 ha campus includes classrooms, laboratories, experimental farms, recreational facilities, staff and student housing and a forest reserve. The campus reuses or recycles 83% of its waste and has six biodigesters that treat wastewater and produce biogas. Last year, the campus emitted 1,704 tonnes of carbon dioxide equivalent and sequestered 26,182 tonnes, making it the first Costa Rican institution to be certified Carbon Neutral. (Photo by EARTH University) 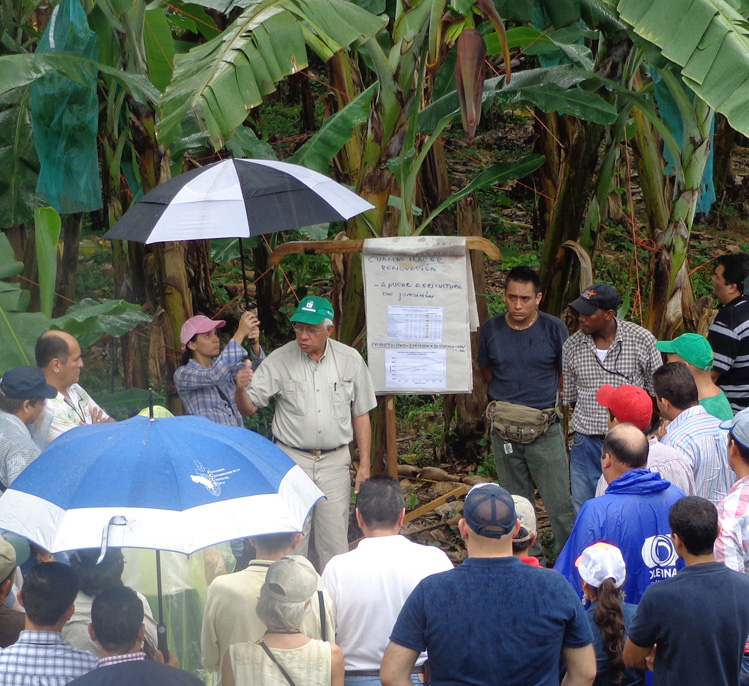 Each year, some 100 students are selected based on their social and environmental values and leadership potential. The faculty includes banana experts such as professor Moises Soto, here talking to participants attending EARTH’s International Banana Congress held in July 2013. (Photo by Luis Pocasangre) 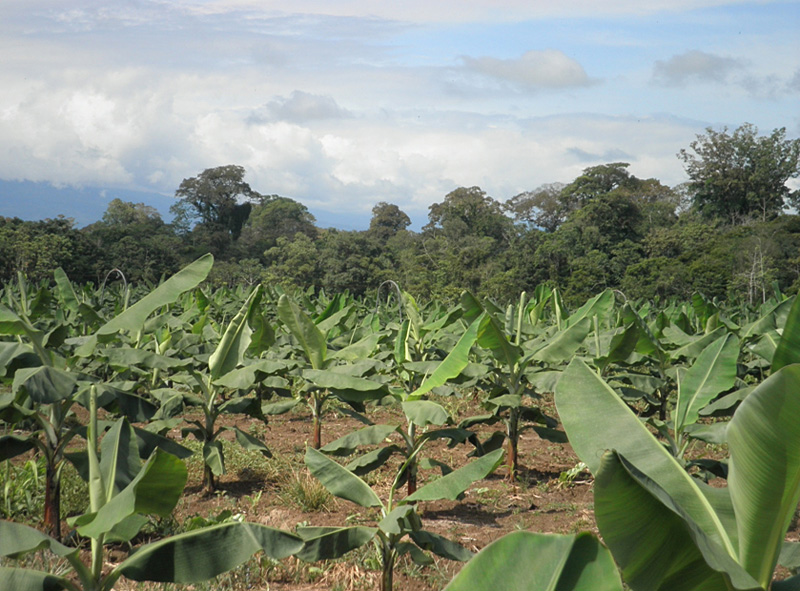 EARTH’s 329 ha banana plantation is divided into several blocks separated by forest to protect biodiversity and reduce the use of chemical pesticides. A 15-meter wide forested zone on each side of watercourses protects from chemical runoff and erosion. Monkeys, toucans, agouti, sloths and wild cats have been spotted in and around the banana farm. (Photo by Edmundo Castro) 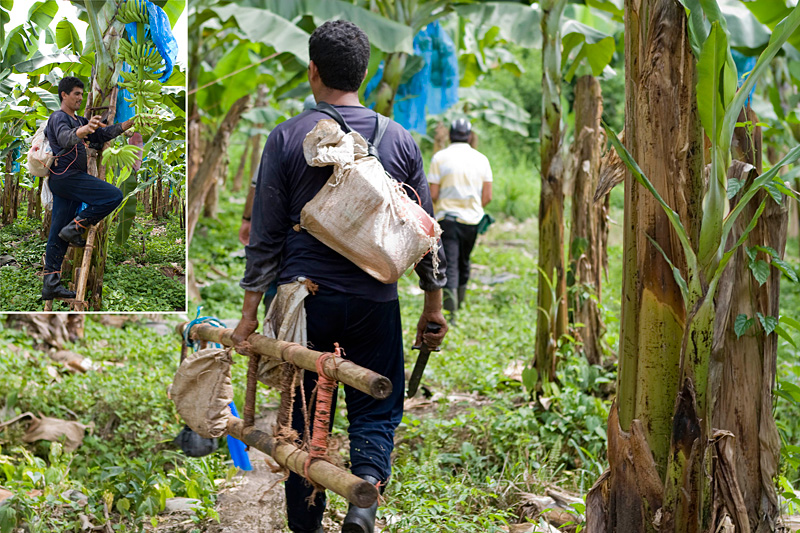 From the outset, the farm instituted fair labour practices, paying its employees a living wage. It also started recycling the plastic bunch covers and nylon cords used to prop up the plants. Instead of pesticides, the plastic bags are soaked in an organic mixture of garlic and hot pepper. (Photos by Angie Johnson) 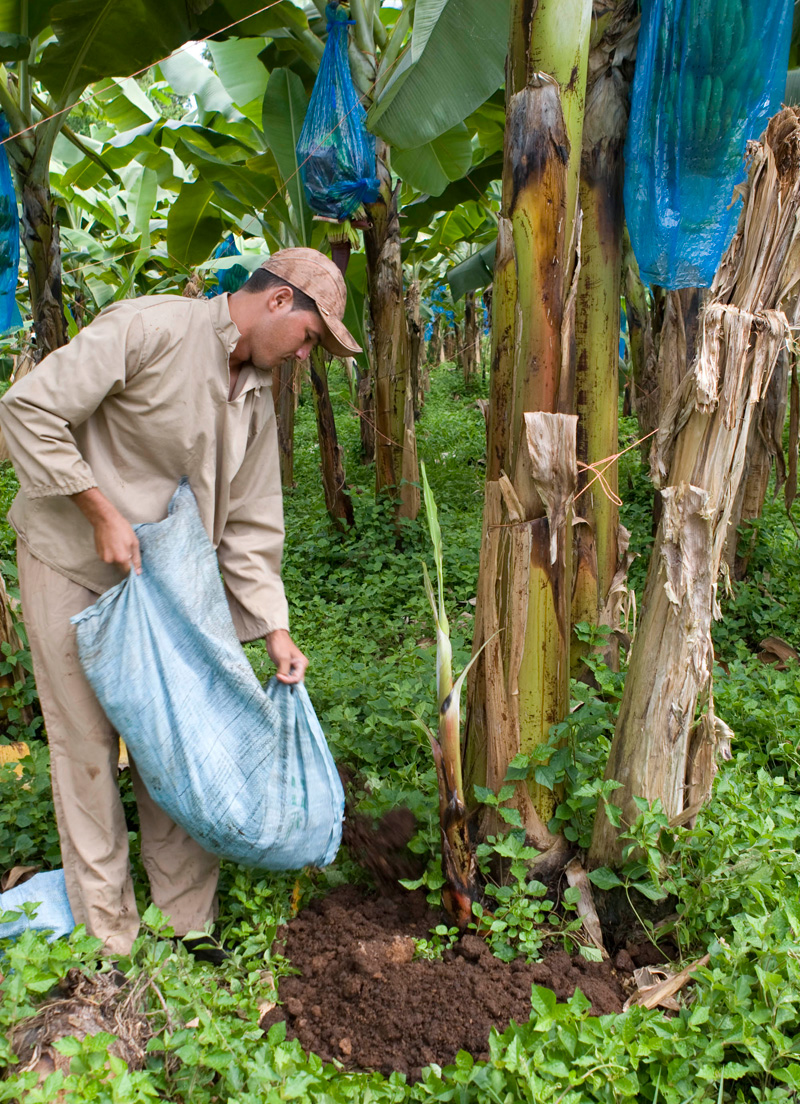 An organic compost (a mix of banana rachis and microorganisms) is applied to improve soil fertility and reduce the presence of pathogens and plant-parasitic nematodes. In 2006, the farm stopped using herbicides by shifting to manual weeding and planting a cover crop. (Photo by Angie Johnson) 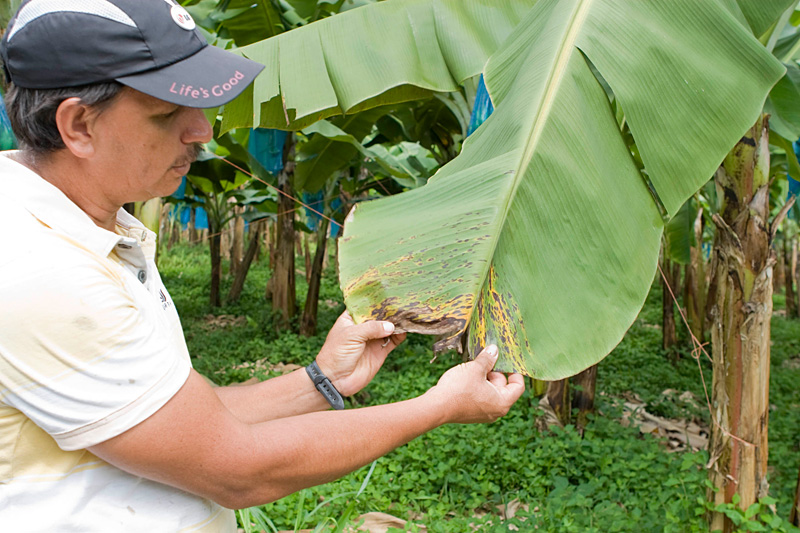 Being located in the humid tropics, the banana farm still needs to use fungicides to control black leaf streak disease. For three weeks a month the bananas are sprayed once or twice a week. On the fourth week, they are sprayed with a proprietary blend of bacteria and yeast, a practice that has led to a 25% reduction in fungicides. The hired crop dusters use GPS devices to ensure the fungicides hit only their target. No one is allowed in the field during spraying and for two hours afterward. (Photo by Angie Johnson) 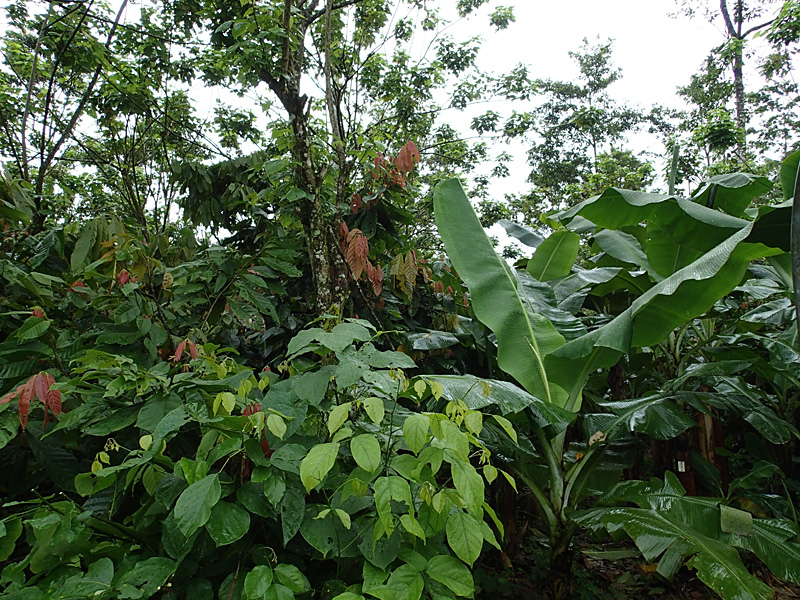 The university also operates two 4 ha plots on which faculty and students experiment growing bananas without pesticides by planting them with leguminous crops, cacao or timber trees. To control black leaf streak, they use organic fungicides and EARTH’s home brew. Although they have shown that it’s possible to grow organic bananas under such humid conditions, they have yet to find a way to break even. (Photo by Anne Vézina) 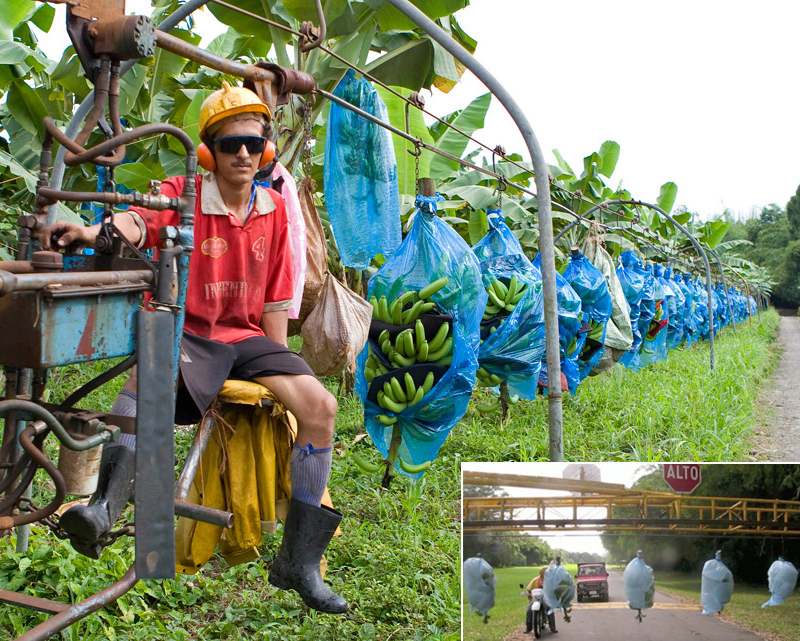 When 100 bunches have been harvested, a mechanical tram nicknamed “the spider” brings them to the packing plant, often stopping traffic when the bananas cross the university’s main road. (Photo by Angie Johnson) 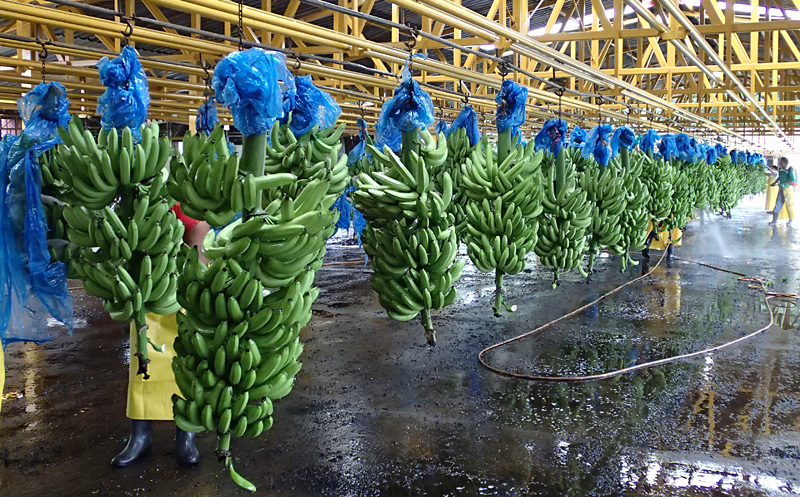 At the packing plant, which is also operated by the university, the bunch covers are removed and sent for recycling to make the corner supports securing the pallets on which the boxes of bananas are stacked. The bunches are pressure washed and the flower relicts manually removed. (Photo by Anne Vézina) 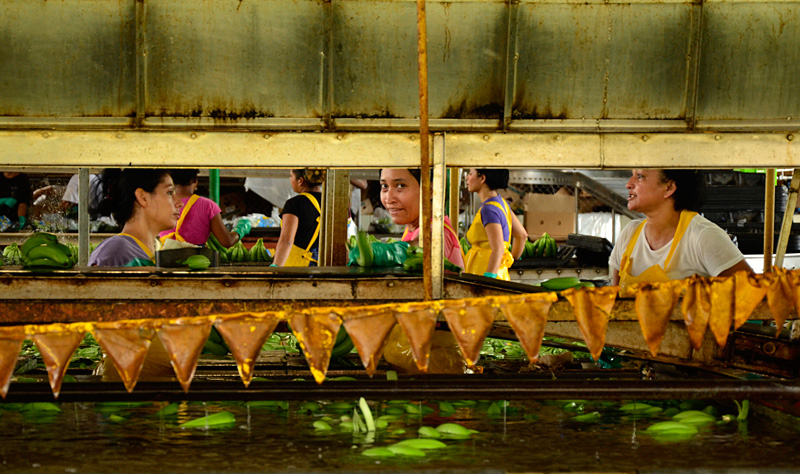 Each bunch is cut into hands that are placed in a wash tub. When they are completely clean, the bananas are sorted by size and quality. To protect against a fungus, a worker applies on the crown a coat of Biocto 6, an organic repellent that contains a citrus seed extract and a wax-based additive. (Photo by Andres Rangel) 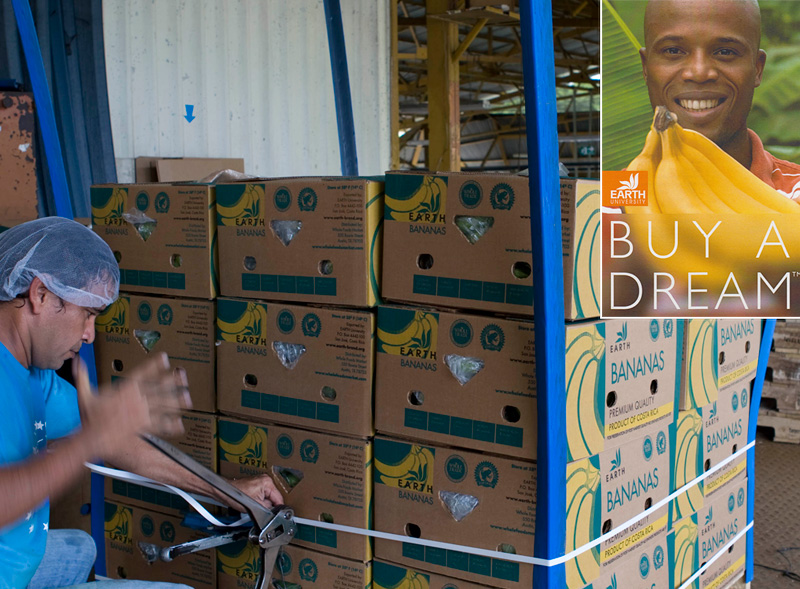 The banana hands are packed in 18 kg boxes that are then stacked on pallets for their transport to the US and Europe. On arrival, the bananas are put in ripening chambers until they are bright greenish yellow. The university uses its ripening chambers for the bananas sold on the domestic market. (Photos by Angie Johnson and EARTH University)